Yesterday Roo announced she wanted to make a map. She’s been doing this a lot lately – drawing random squiggles on a piece of paper and then heading off on some imaginary journey around the house following her maps with a tour group of teddies in tow. Perhaps she had been making maps at nursery or picked up the idea of maps from our frequent travels? I’ve not really been paying proper attention.

As she was about to get out  her colouring crayons to draw yet more maps it suddenly occurred to me that despite all our wanderings and the fact our bookshelf and lives are heavily laden with OS maps, we have never actually looked at a map properly with our children. With Beth there is a good reason for this. She would eat it. Roo though has just switched on to the magical code that is reading, labouring over simple letter sounds in the hope that they will reveal a hidden meaning. She prefers to look at or draw on paper than taste it and is definitely old enough for a gentle introduction to yet another code that this time opens up a secret door to the whole of the outdoors. 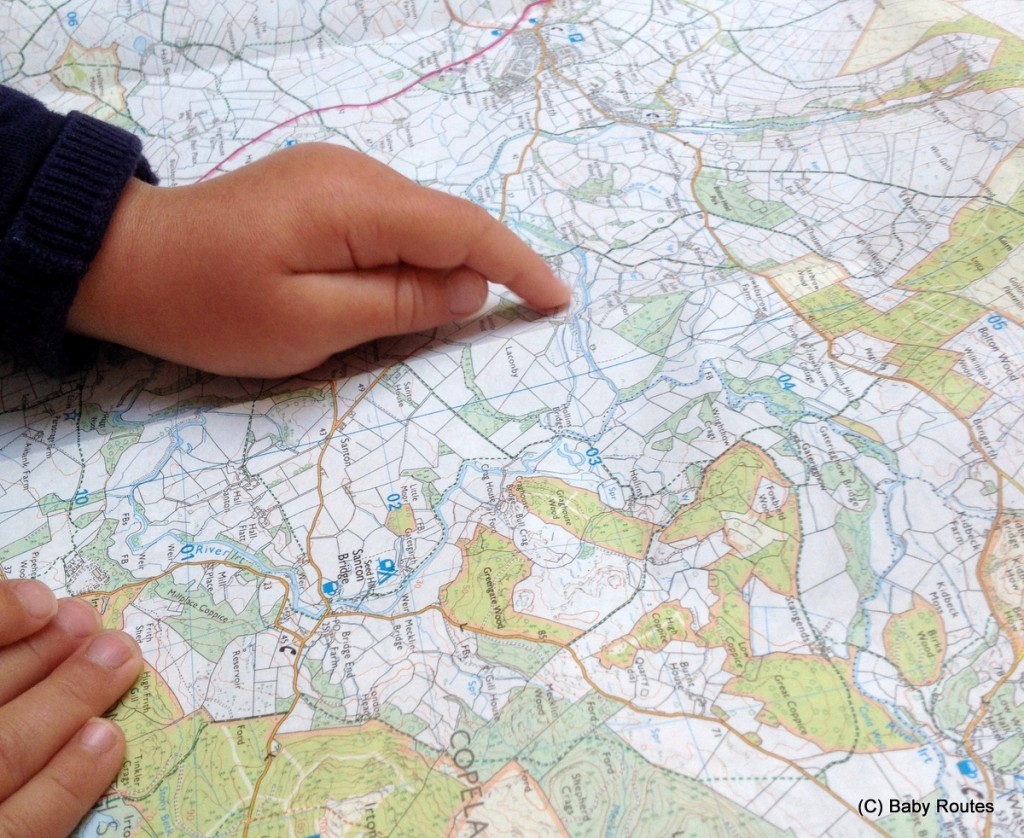 Spotting features on a map. Rivers were definitely the most interesting for Roo.

There is defintiely something magical about maps. Spending hours pouring over every line of terrain, every footpath and boundary before a walk is never a chore for me. Every marking on those unwieldy bits of paper or online graphics represents adventure, an imaginary landscape I can walk in my head. Then, just like a book being made into a movie (albeit with much better actors) you can discover the physical landscape that belongs to these etchings. Usually it is a journey of delight, colour, challenge and wonder. Rarely it can be disappointing or unfamiliar, a poor adaptation of a script you had so clearly in your head. Visit the same place across the seasons and those markings will belong to a subtly different landscape again, revealing secrets that cannot be found on their paper counterparts no matter how hard you look. Whatever the reality though, map reading is always an exciting journey of discovery, of matching the abstract unfamiliar to its physical reality, a visual orchestral performance of a piece of landscape you have only ever hummed to yourself before from its score.

Roo enjoyed examining the maps, taking time to uncrinkle their awkward folds and to scour the paper for clues. She found a river without any prompting. After explaining a few of the other key symbols to her she was soon off in her own world of imaginary journeys once more, tracing routes as you would in those mazes you find in kids’ colouring books. Explaining to my 3 year old the symbols for toilets and telephone boxes also made me realise how the times have changed. Roo could not understand why the telephone symbol looked like an oddly formed banana and wrinkled up her little nose in perplexity at this grown up world that decides to call a simple loo something as veiled and mysterious as a ‘public convenience’. OS maps are made for and by grown-ups with symbols from a time she will never know. It was time to make something a little more child friendly. 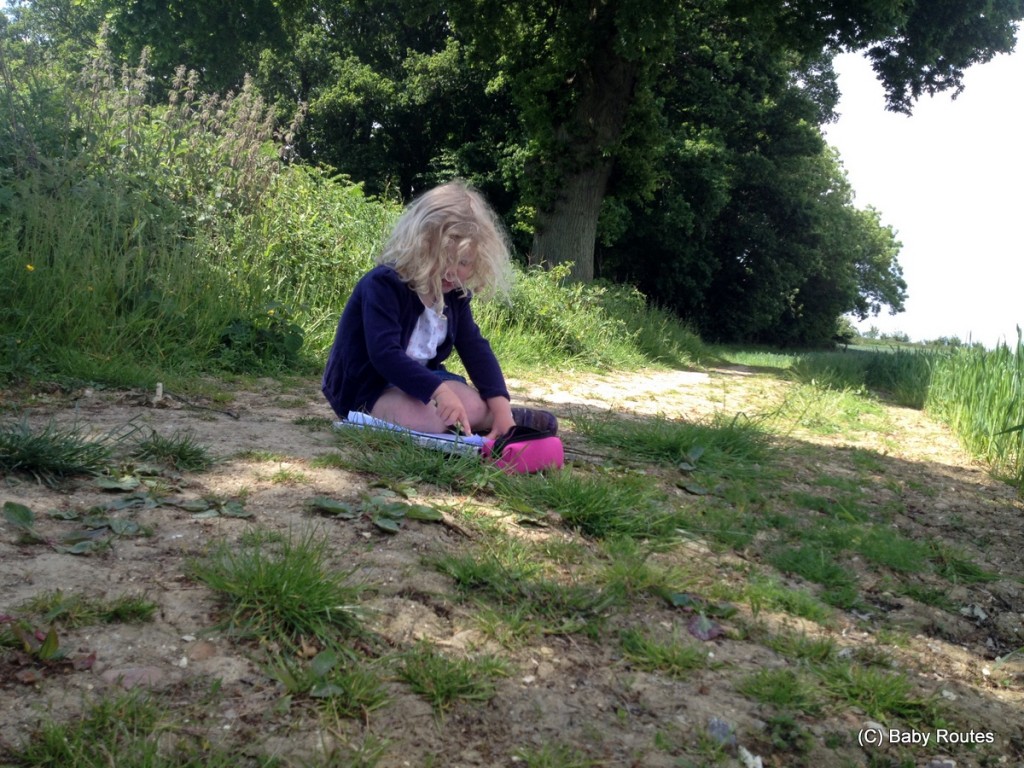 Making a note of an important navigational plant…

With Beth in her carrier we set out on one of our favourite local walks. The goal to make a map of our route for Daddy to follow another day. Roo lead the way, armed with clipboard, paper, pencil case and a new sense of self-importance. She was the undisputed leader of the day. Every time we came to a turn or bend in the path Roo would ponder over the direction, get out her colours and add some more lines and drawings to the map. It was fun to see the things she noticed  to mark out the route – a large nettle bed, some goose grass, rabbit or fox holes and ‘look -2 large houses Mummy!’ after a period of walking with no building in view. It was also great to know that she was able to get herself around the route with very little help on directions from me. Whilst Roo is still largely in the dark about left and right I can see this being a good activity to do again as she gets older as well as during other seasons to compare her changing landmarks.

As with all of the outdoor activities we have done since we started the 30 Days Wild Challenge, it was lovely to see how a short time spent outdoors with a bit of a focus made Roo switch on to the landscape around her. It’s also great to see how much is sinking in. After our Open Farms Sunday trip the day before she completely stunned me by announcing she was going to draw wheat on her map – a genuine feature we were passing at that moment. Roo also found bugs and beasties to show me, looked down all the rabbit holes and pointed out that the elderflower we had visited a few days before on our foraging trip had grown lots of new flowers. It is amazing how much sinks in to little minds. 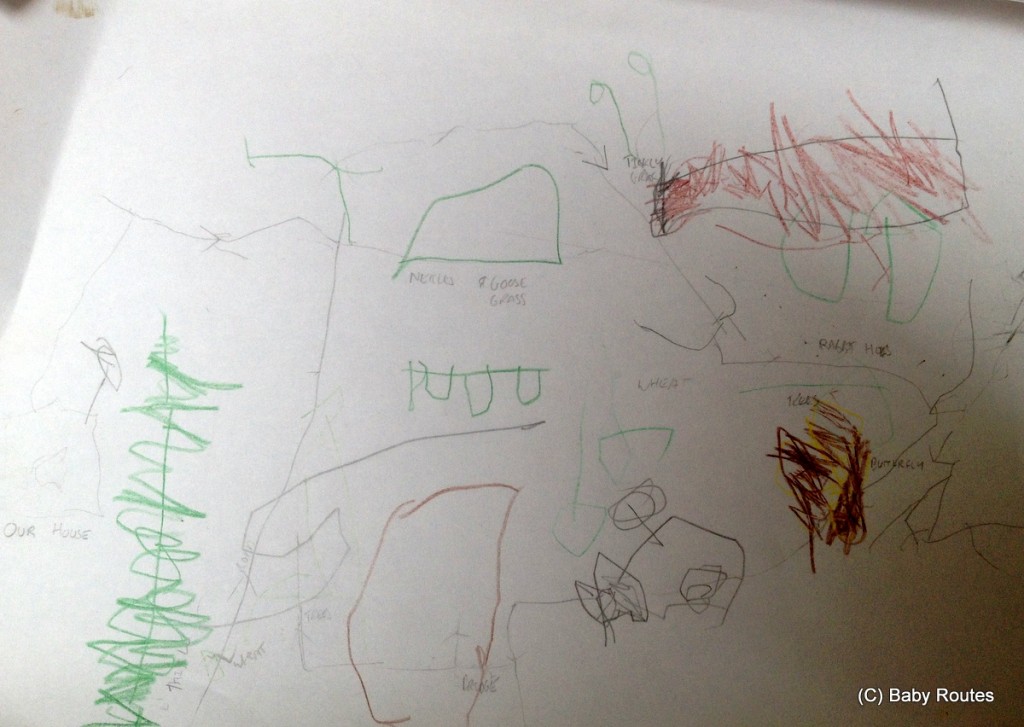 The final result, looking vaguely like a map! Having watched her make it, it’s actually not that inaccurate in terms of turns and features. Good luck Daddy though…

Roo’s final map result was surprisingly recognisable to me. It even managed to link up with the outward marked route, though more by complete luck than design I suspect. At her request I annotated her illustrations with those other magical symbols – words. We haven’t shown Daddy yet and the ultimate navigation test is still to come but she did have great fun making her map and I had a lot of pleasure in sitting back for once and watch her interpret the landscape through her own preschooler’s eyes. I really hope she still finds rabbit holes worthy of mapping when she is eighteen.

Permanent link to this article: https://babyroutes.co.uk/30-days-wild-day-8-making-maps/ 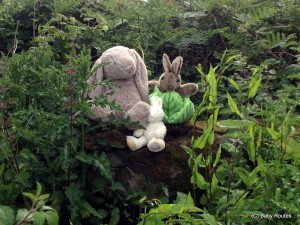 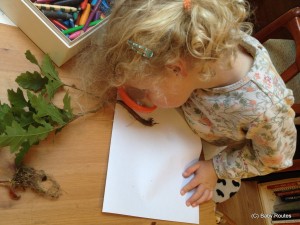 Which map? How to choose the right Ordnance Survey (OS) Map for your walk.