Outdoor Ideas for February Half Term

Bear’s First 1km (or walking with an inbetween, again…)

Just over a week ago Bear walked his first official continuous 1km. I’ve had a feeling he was capable of it for a while but we don’t record our every walk. It’s not really about the distance when you’re walking with kids, is it?

That Friday was a sunny, if somewhat nippy, January day. Bear was most definitely in an outdoor mood. He demonstrated this by fetching his wellies and waiting expectantly by the backdoor. When I failed to respond instantly he attempted to get one foot in a back-to-front welly, got stuck, fell over and banged the window and shouted in protest at the world’s general non-compliance with his wishes. It was time for a walk.

We headed to the historic market town of Wallingford armed with duck food and vague plans for a riverside and castle wander. Bear was far too energetic to consider putting him in the sling I’d brought with me. We took some time to feed the many ducks at Wallingford Bridge and then set off along the tow path at a snailish toddle. 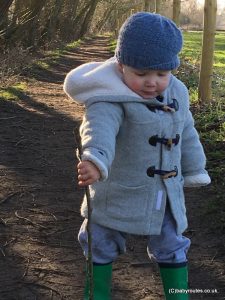 Snailish is probably an understatement. Bear stopped to inspect or pick-up literally every other stick, point at every boat (accompanied by attempts to sing ‘row, row your boat’), shouted expectantly for ducks at every half meter and occasionally, just occasionally, toddled on more than two meters in one go. 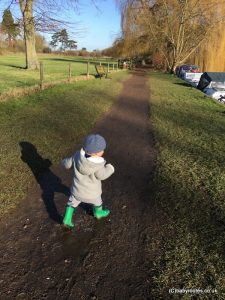 And he’s off… totally unphased by the Thames Path National Trail!

I was taken a little by surprise with being back at the inbetweener stage of walking with a toddler quite so soon. It’s one of the trickiest ages for outdoor families that enjoy a good stroll, especially when there is more than one child in the family.

It’s a stage that can last a good couple of years from my experience with his two big sisters and there’s really nothing for it but to plough on through, armed with a light-weight sling, plenty of super-short walking routes to try and buckets of patience. The more they toddle unaided and build stamina, interest and strength, the faster your toddler emerges as fully-fledged go-anywhere, up-anything mini-adventurer. 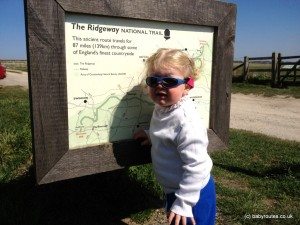 Roo at around 18 months excited to get going on the Ridgeway National Trail , having just hit the ‘inbetweener’ stage.

When it was just Roo accompanying us on our walks, the challenge was in us as adults having to relearn our style of walking. We learnt to slow down, enjoy simply ‘being’ outdoors, to know when to accept defeat on any route plans and be ready with cuddles and a carrier as soon as she had tired out. I remember that being really tough to start with.

With other children comes the extra challenge of finding a walk with plenty of interest for the older children or having lots of imaginative games up your sleeve. Roo is a super speedy six year old now and it’s easy for her and her sister to become frustrated at the slow pace when their little brother is determined to follow them on foot. 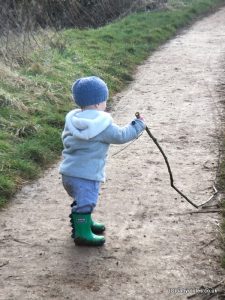 Yet another stick stop. Walking is slow going when there are quite so many sticks that require inspection!

I remember one walk we set off on last week where Bear insisted on walking the whole time. We made it as far as the end of just one small field before it began to get dark! Luckily there were plenty of hedges for his big sisters to race between whilst he made his plodding progress over each lump and bump of the muddy path. 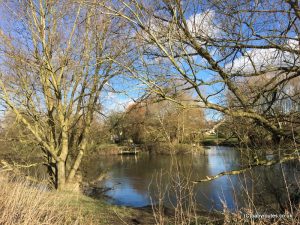 You could almost smell spring hiding round the corner!

Back on the path in Wallingford and Bear was still ambling along. By this point we had seen several fellow walkers twice, now on the return leg of their walks! It didn’t matter. It was a lovely spot for a relaxing stroll with plenty of hints of spring, boats, helicopters and historic interest for us both.

After an hour of meandering along the Thames Path, Bear took to plonking down on his bottom every so often and lingered longer and longer over each stick. It was time for the sling. 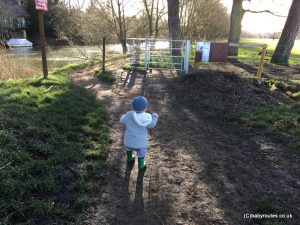 Bear beginning to tire, demonstrated by him heading off in the wrong direction (in my mind anyway) !

I reviewed our route options on my walk tracker and whilst doing so, realised that we had covered a whole kilometer. It sounds like a miniscule amount but for Bear’s tiny 16 month old legs this was a massive feat and yet it had slipped by almost unnoticed. 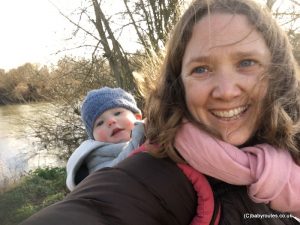 And time for a rest and ride!

We returned via the fields and Wallingford Castle Meadows on a circular loop. I was tempted to get Bear out for a toddle about the ruins of the old bailey (how Roo & Beth would have loved playing soldiers here) but he was snuggled up so cozily inside his thermal cover in his sling on my back I resisted.

By the time we got back to the car he was snoring loudly, no doubt dreaming of ducks and boats. In fact he was so tired out that he didn’t wake as I transferred him to his car seat and drove home! 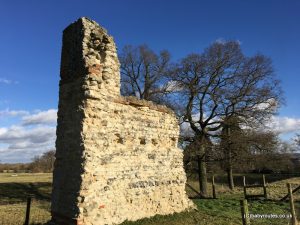 Part of the ruins at ancient Wallingford Castle.

So there we have it. We are now officially back in the ‘inbetweener’ stage of family walks.

Do you have an inbetweener in your family? What strategies do you use for still getting out and enjoying a good walk whilst they learn to find their feet?

You can find route details for our Wallingford Castle & River Walk here.

Permanent link to this article: https://babyroutes.co.uk/bears-first-1km-or-walking-with-an-inbetween-again/ 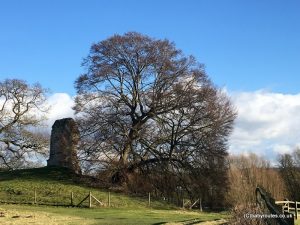 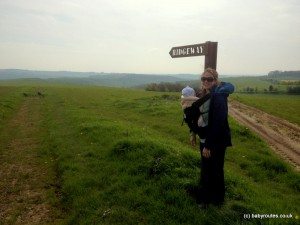