On Moving Across the World…

Los Angeles may be recognised globally as the glamorous home of movies but its reputation for appallingly bad traffic is not far behind. Home to the very first freeway in the United States and with a population of over 10 million people, Los Angeles County has developed a transport system predominantly focused on cars. Whilst cycle lanes do exist in places, using pedal power to get about is often not particularly easy or safe in most of LA.

Trying to address this imbalance is CycLAvia – a movement that, once every few months, shuts the streets of an area of Los Angeles to traffic. Instead of the usual jam-packed fume-ridden streets, whole sections of LA are opened up for free to bicycles, roller-blades, scooters, joggers and pretty much anything that doesn’t involve an engine and pumping out pollutants. 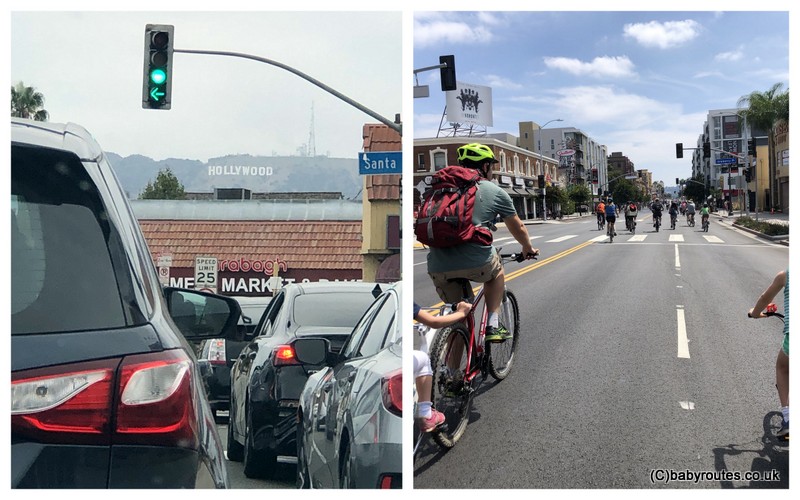 Tipped off by one of my husband’s colleagues, we packed up our bikes, helmets and children and headed down to check out  CycLAvia’s last event.  The ‘Meet the Hollywoods’ route wound through West Hollywood and on to Hollywood Boulevard and the internationally famous Hollywood Walk of Fame.

Our first stop was Bikes & Hikes LA, to pick up a rental tag-along for our five-year-old. Whilst an independent cyclist, she still has a rather alarming habit of lurching violently out to the side whenever she turns her head to look round – not ideal for sharing the road with others!

Tag-along safely installed, along with its grinning five year-old rider, we hit the wide and wonderfully empty streets at 9 a.m.  Our eldest, on her own bike, was gleeful to be able to cycle freely without one of us calling to her to ‘slow down’ or ‘be careful’ and both the other kids wore big smiles. The largest grin though belonged to my husband who didn’t have to put in any effort as our daughter was pedalling away with such enthusiasm on her tag-along that she was providing more than enough power for them both! 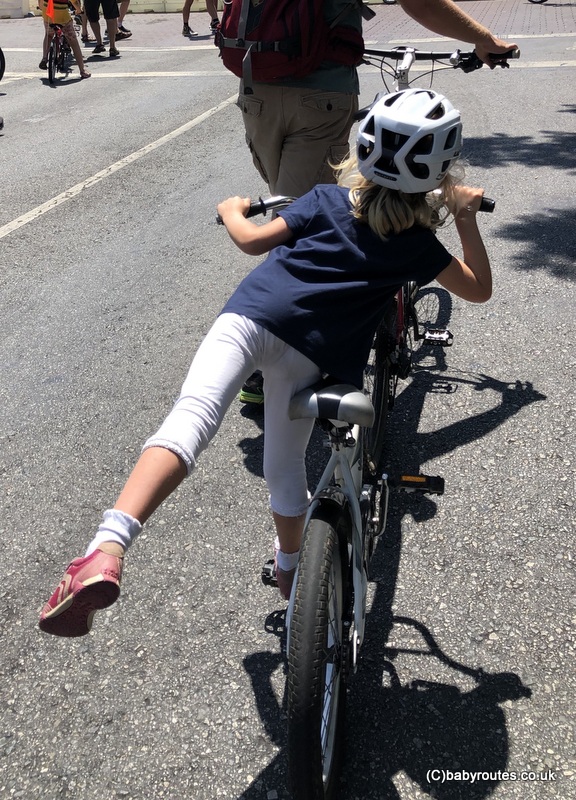 As well as powering her Daddy around the route, the tag-along also turned out to be good for practicing gymnastics…uh oh!

First stop was at the Plummer Park hub where the kids joyfully disembarked to have a go at scaling a climbing wall set up specially for CycLAvia, totally free of charge.  Starting early paid off – the kids got multiple turns without a single queue. More hubs lined the route, each with different stalls, freebies, refreshments and family friendly activities going on. 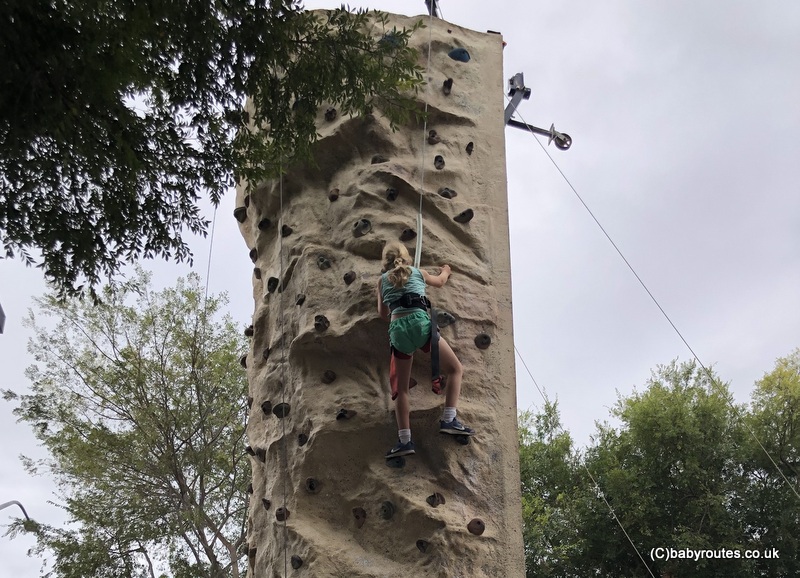 Scaling the heights when we thought she’d just be cycling…

Our highlight was cycling down Hollywood Boulevard. For those of you familiar with this area, it is usually heavily crowded with tourists posing by the stars or placing hands or feet in the casts outside the Chinese Theatre. Traffic is a constant presence, except when closed for special (mainly movie related) events. In amongst both cars and pedestrians prowl the occasional Batman of Spiderman in search of tourists willing to pay for a superhero selfie. It would seem that rescuing people just doesn’t pay the bills. First-time visitors, their heads full of retro-Hollywood glamour, are often surprised by the resulting lack-lustre feel of the place on an average day. 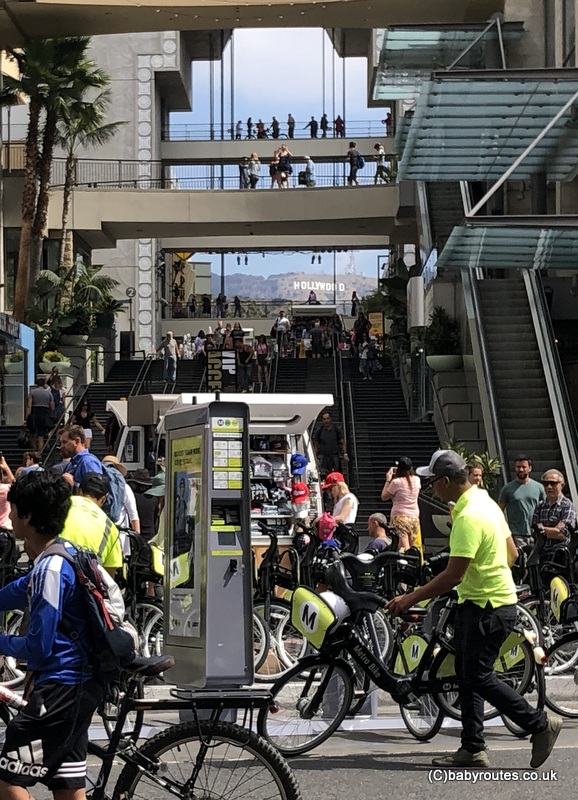 Spot the Hollywood sign through Hollywood & Highland Mall, above all the lycra & spokes.

On that morning CycLAvia had transformed the area around the Hollywood & Highland shopping mall and the Dolby Theatre, home to the Oscars, into a joyful cycle hub. A throng of casual cyclists checked out the sights whilst enjoying refreshments or trying out electric scooters. The sea of helmets and spokes made for an unusual scene.  ‘Is there some kind of event on?’ I overhead one bemused tourist mutter to another. 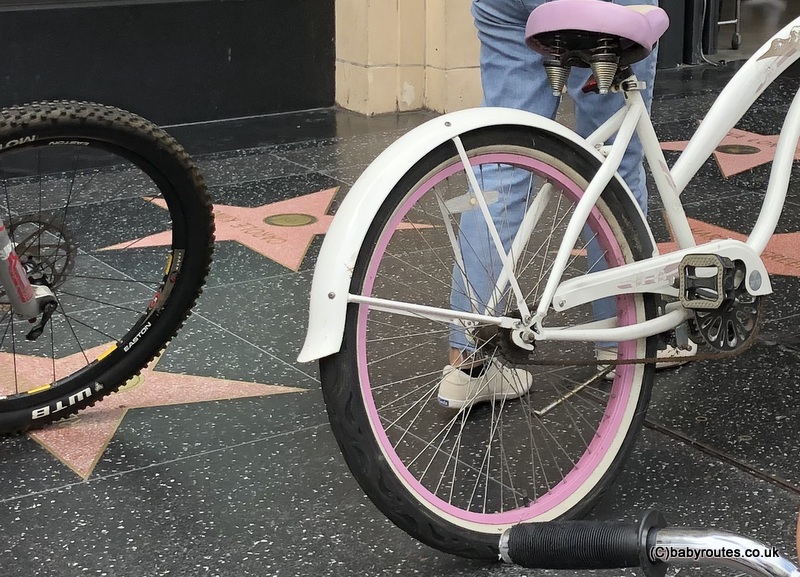 Cycling with the stars on the Hollywood Walk of Fame.

Mounting our bikes again at the corner of Hollywood and Highland, we continued along a remarkably green and pleasant Hollywood Boulevard, transformed by lack of traffic. How lovely LA’s streets would be if pedestrianised! We were able to enjoy occasional glimpses of the Hollywood sign and Griffith Observatory to the north without having to worry about colliding with crazy cars. We continued all the way to the end of the route at the intersection with Vermont to take a breather and grab some lunch from the food trucks. 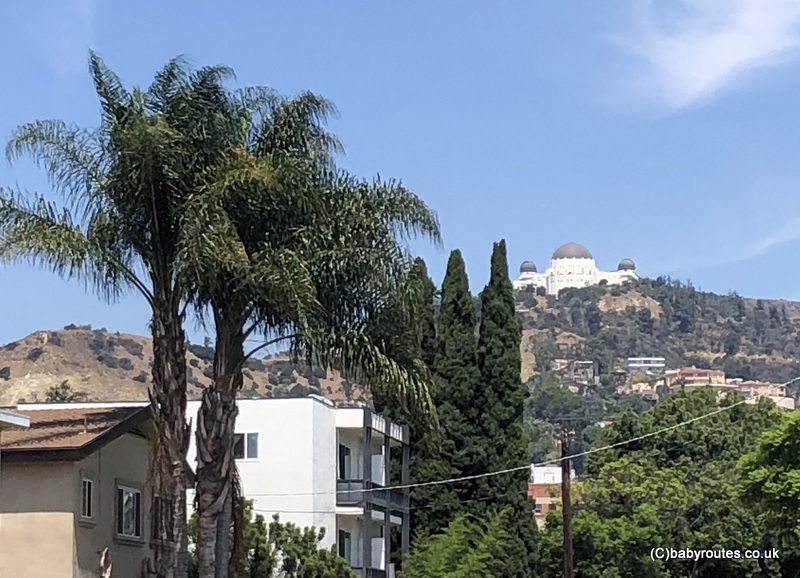 By the time we headed back things had really picked up but with an army of smiling CycLAvia volunteers, dismount zones and road intersection crossings  were managed smoothly. Our fellow cyclists seemed to take the event in the spirit intended – leisurely fun for all.  We were now flanked by all manner of road user – from tricycles doing wheelies and dogs in bike baskets to sofas on wheels and bikes towing miniature bikes. Music played out along the streets, bike-taxis waited to return weary foot travellers and everyone was in party spirits. This was LA at its most eclectic and fun and we enjoyed every second. 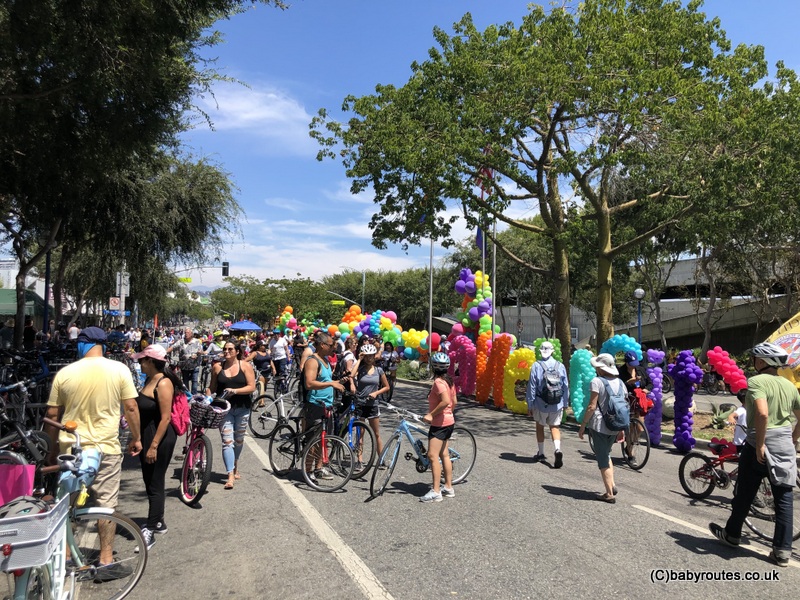 So much so in fact that the kids insisted on continuing past our intended finish and right down to the West Hollywood hub and back, despite that meaning finishing on an uphill. When we finally managed to persuade them it was time to get off their bikes and give back our rented tag-along,  you would think they might have been worn out. After thirteen miles of cycling however, all they really wanted to know was how soon they  could do it all again. 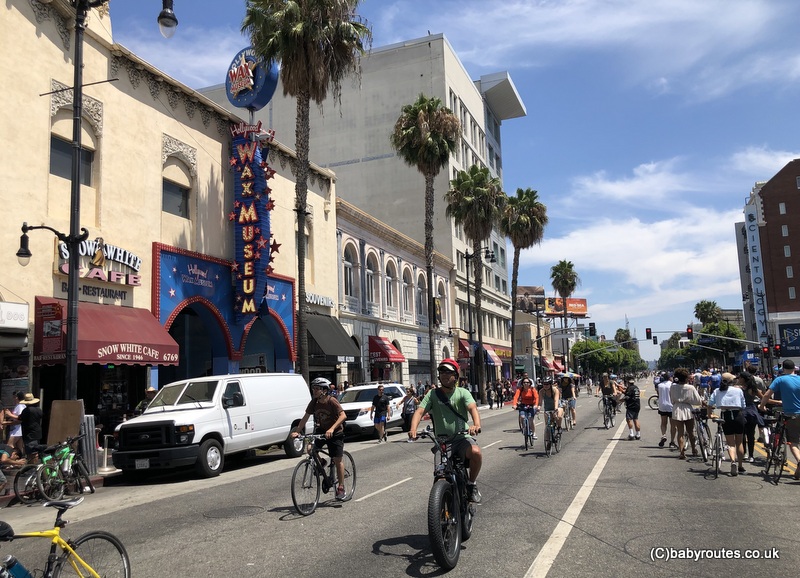 For more information please visit the CycLAvia website. The next event is Heart of LA  ( taking in Westlake, Chinatown, Little Tokyo, Boyle Heights and DTLA)  on October 6th 2019, 9-4pm.

Permanent link to this article: https://babyroutes.co.uk/cylavia-cycle-hollywood/ 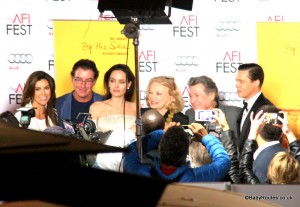 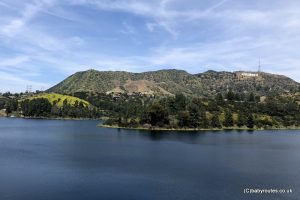