Family Days Out: The Swiss Museum of Transport, Lucerne 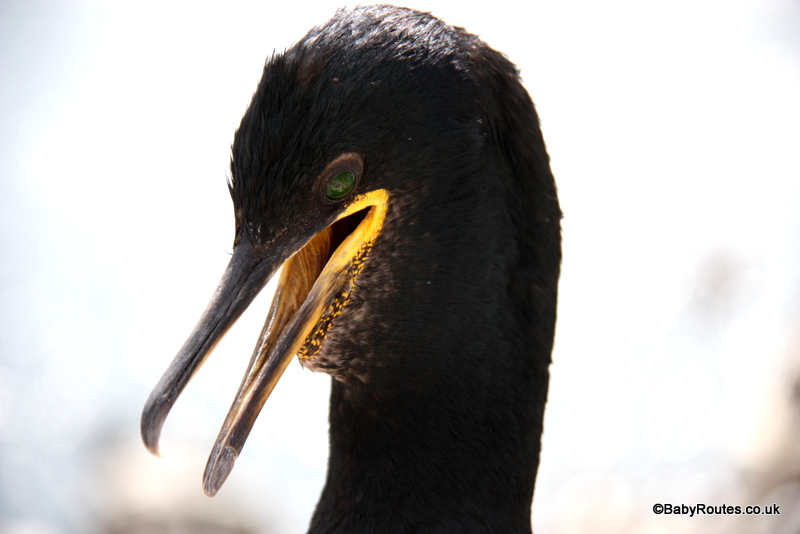 Taking young children on a bird-watching boat trip might not spring instantly to mind. If you’re in Northumberland between April and July though, it really ought to.

You don’t have to be a nature buff to appreciate the Farne Islands nor do your children need to know their coots from their woodpeckers. This is an outdoor experience that will leave little ones wide-eyed at the wonder of nature so close at hand. Trust me. You will all love it.

If you’ve watched the latest BBC Springwatch series then you won’t need convincing. The antics of the internationally important bird colonies of the Farne Islands entertained viewers for over three weeks in the 2016 series. You can catch up using the link above.

Each year thousands of sea birds flock back to the tiny rocky outcrops that make up the Farne Islands to breed. Some come from as far as Antarctica. Some never come ashore except for nesting season. Combine this massive influx of bird life with the fact the Farne Islands are so easily accessible by boat from Northumberland’s coast and you have the recipe for some of most exciting and up-close wildlife watching in the whole of the UK. 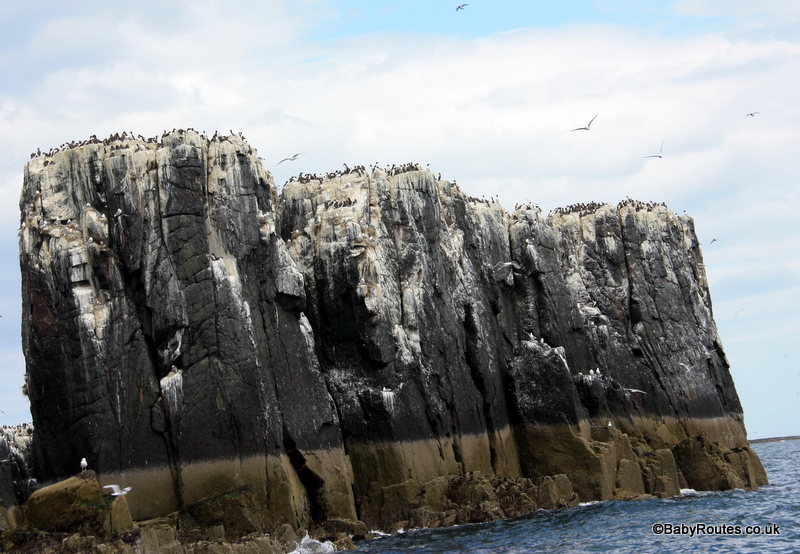 The rocky cliffs of the Farne Islands – home to thousands of nesting seabirds.

Having visited Skomer Island off Pembrokeshire, Wales, with the girls previously, we already knew that a trip to the Farne Islands was likely to be a big hit with them. For Roo (now four) who was aged just two-and-a-half when she visited Skomer, the puffins that captivated her heart there have remained one of her very few vivid memories of family holidays in her short life to date. We couldn’t wait to give Beth a similar experience. 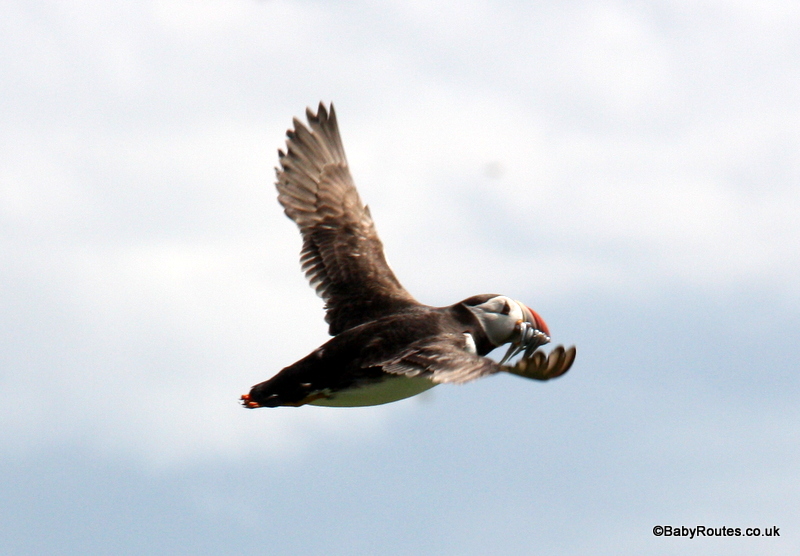 Puffins, their beaks crammed with sand eels, were a common sighting on our Farne Islands adventure.

At first our trip seemed uncertain. Warnings of bad weather all week and cautious mutterings about taking very young children from one boat company left me disheartened at the start of our holiday. I didn’t dare mention that I would also be sporting a 7 month baby bump at time of travel!

The Farne Islands still called to me though. When our penultimate day in Northumberland dawned bright and promising I picked up the phone to a different company. Serenity Farne Islands Boat Tours greeted me warmly. Within minutes a trip was booked to  Inner Farne for a few hours’ time. We were off on our Farne Islands adventure!

After a bit of a mad waddle-dash to the main pier (n.b. always use the public conveniences before heading off on a boat trip with preschoolers and/or if pregnant and ALWAYS leave time for an entire primary school trip to use them before you…) we made it to the Serenity kiosk to pick up our tickets  and landing passes (see Practicalities).

Waiting for our boat at Seahouses harbour.

For Roo and Beth, the ensuing wait for our boat to take its turn to pick-up passengers at the end of Seashouses harbour wall was an enthralling activity in its own right. By the time it was our turn to embark they were champing at the bit. 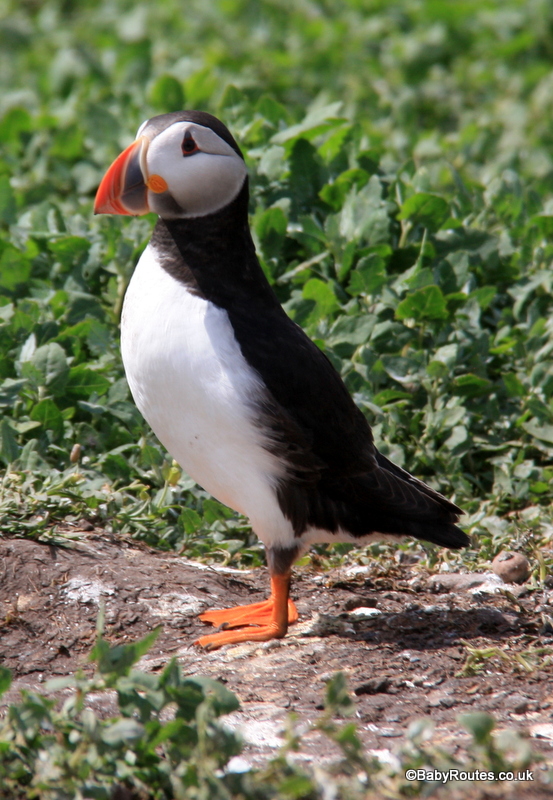 We didn’t have long to wait for our first exciting seabird sighting. Just a short way out of Seahouses harbour we noticed some familiarly comic shapes bobbing on the waves.

‘Puffins!’ repeated her little sister, in complete ignorance but equally captivated by the infinitely endearing, slightly awkward little birds. They are not known as ‘Sea Clowns’ for nothing! In that one moment our whole trip was made worthwhile. Little did we know but the fun had only just started. 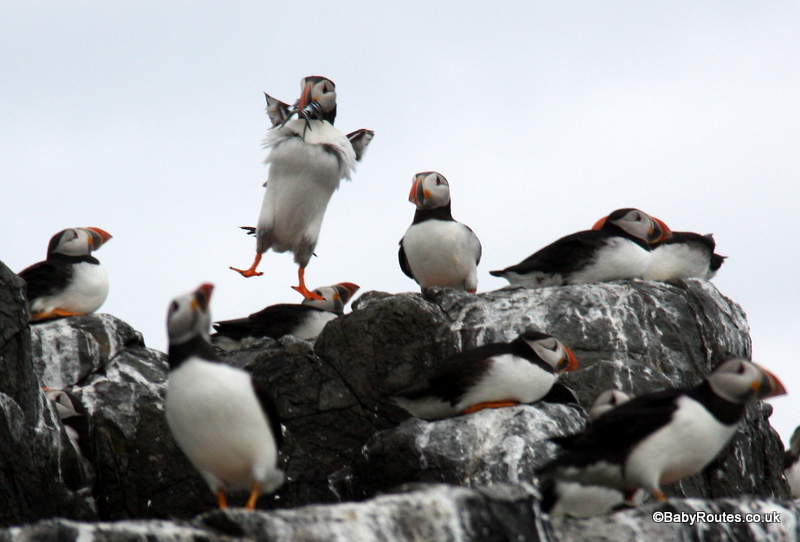 “Take-away is here!” What’s not to love about the comedic little puffin?

Before landing on Inner Farne our boat took us out to the more distant set of Farne Islands. It sailed closely by seals lazing on the rocky outcrops who watched us impassively through sleepy eyes. The Farne Islands have one of the largest breeding populations of Atlantic Grey Seals in England. Beth, who first really clocked seals during our trip to Norfolk last December, was in her element. 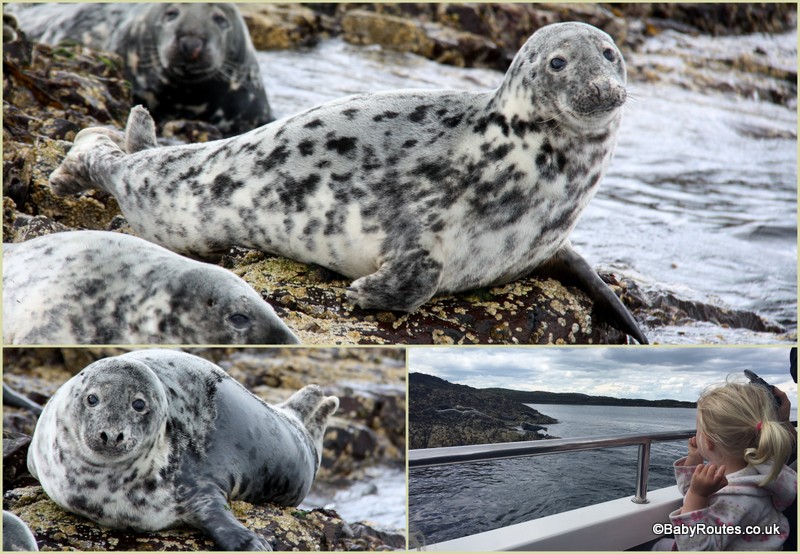 A highlight for Beth – plenty of seal spotting opportunities from the boat.

Tucking in closely amongst the cliffs of Staple Island we were met by the overwhelming din of hundreds of seabirds. That and their unforgettably pungent accompanying aroma! Seabirds crammed themselves onto every precarious ledge of the sheer cliff towers. They were so close it felt almost as though we were one of the throng ourselves. The kind faces of the kittiwakes peered out curiously from their carefully balanced nests, occasionally accompanied by tiny fluffy chicks. The guillemots crowded every inch of the rock-face, seemingly defying gravity. Blunt-beaked razorbills and the occasional silhouette of a shag loomed imposingly against the blue sky.

The British Penguin. Otherwise known to sensible birders and non-preschoolers as the guillemot!

It took some time to convince Roo and Beth that the crowds of guillemots were not penguins. I remember Roo having the the same identification problem at Skomer. With their dainty black and white bodies, habit of crowding together and their graceful movement in the water it’s easy to see why. I made a mental note to bring the girls back should the notion of an Antarctic trip occur to them anytime in the near future. The Farne Islands are a lot warmer and infinitely more affordable! 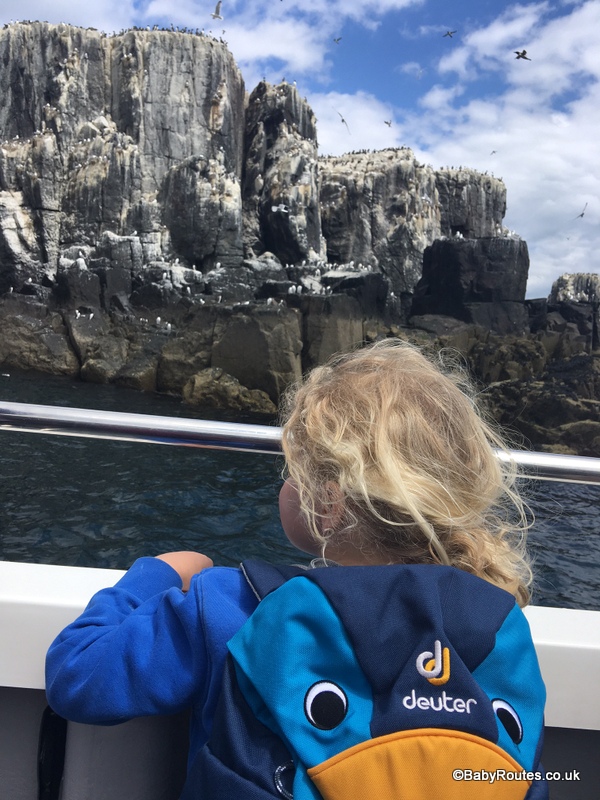 Roo entranced by the towering cliffs of “Guile-penguins”.

Despite these up-close encounters, nothing prepared us for just how near the birds would be once we landed on Inner Farne. We put on our hats as advised by the boat crew and disembarked with equal amount of curiosity and trepidation.

Within minutes the reason for the hats became apparent. Inner Farne is a particularly popular nesting spot for arctic terns and they really aren’t fussy about how close to the paths they make their nests. At the height of breeding season in June they definitely do mind you getting too close to them though, with dive-bombing and the occasional warning peck a common price for visitors to pay in return for such stunningly up-close views from the paths of the terns’ nests, eggs and chicks. 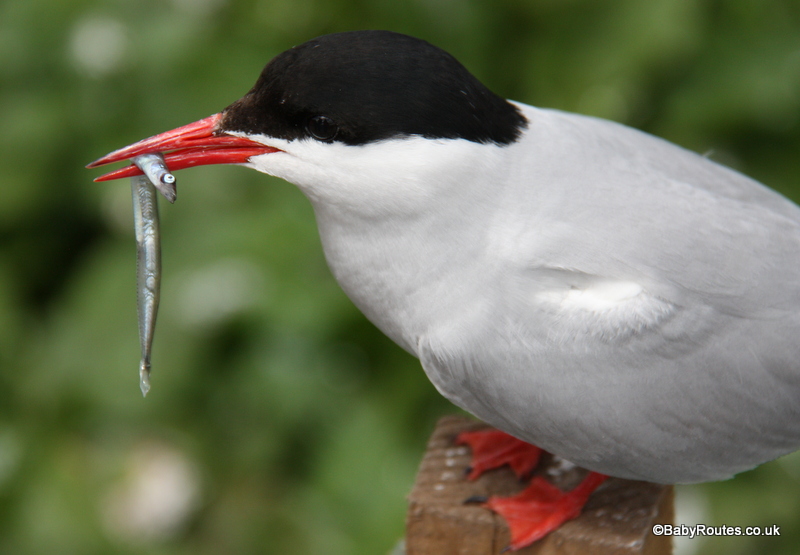 An arctic tern, perched bold as brass right next to us, with its sand eel catch.

This sounds and looks an awful lot worse than it actually is. A sturdy hat and a wave of your hand over your head was enough to deter most of our dainty assailants. I got pecked a couple of times through my unsuitably flimsy sunhat but it didn’t really hurt. If you bring a wide-brimmed more substantial piece of head-wear then you’re sorted. The sturdy sun canopy on Beth’s Deuter child-carrier meant that despite being the highest and most frequent target, she merely watched in unperturbed fascination as the terns flew right by her. 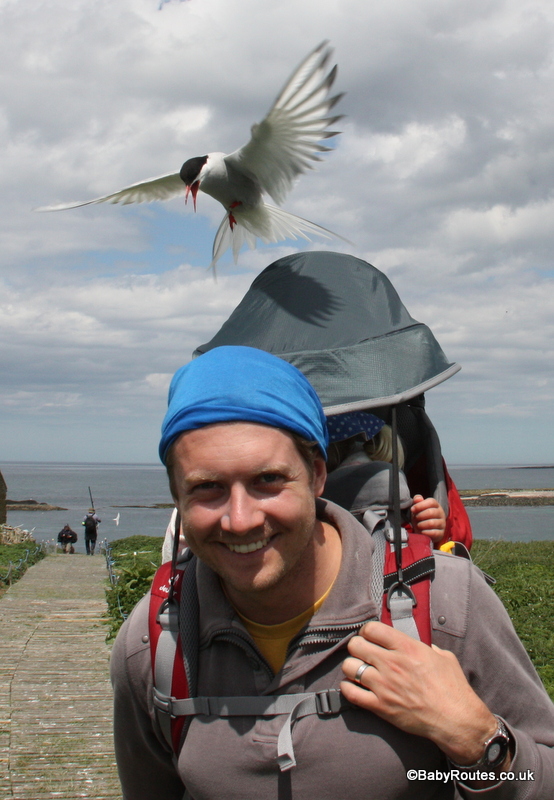 One cross arctic tern reminding a completely fascinated Beth that we were just a touch too close to its nest!

We wove our slow way round the under-1km walking route that circles Inner Farne. So absorbed were the girls in each nest, bird and chick that our one hour disappeared in no time. As well as the highlight of the feisty arctic terns, we watched Eider ducklings bobbing about on the inland ponds, came nose to nose with a Shag and its offspring on the clifftops to the south and could have spent so much longer observing the wonderful little groups of puffins. 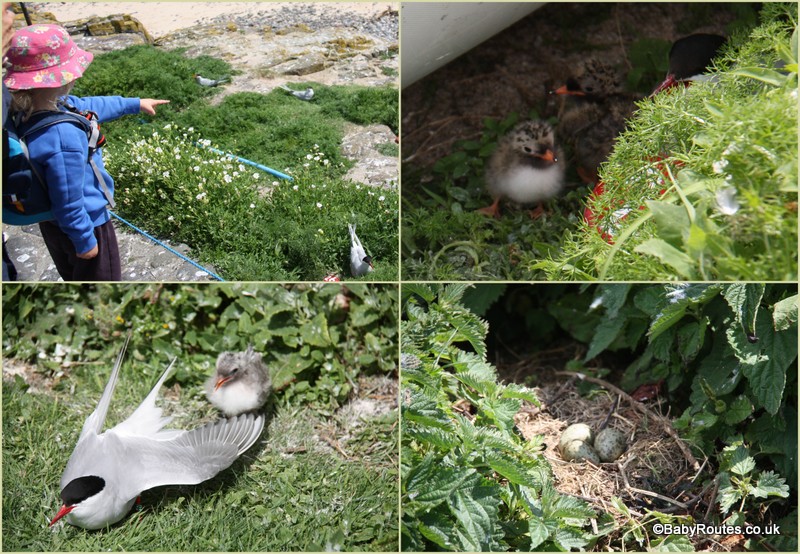 The north-western side of the island provided fantastic views back to the Northumberland coastline and imposing Bamburgh Castle. It also seemed to be the direct flight path for incoming seabirds, their beaks stuffed full of the glistening sand eels that make the Farne Islands such an important seabird breeding site. We spent so long absorbed in watching the seabirds that we didn’t get time to pop into the tiny chapel that commemorates Inner Farne’s famous non-avian resident, St. Cuthbert. 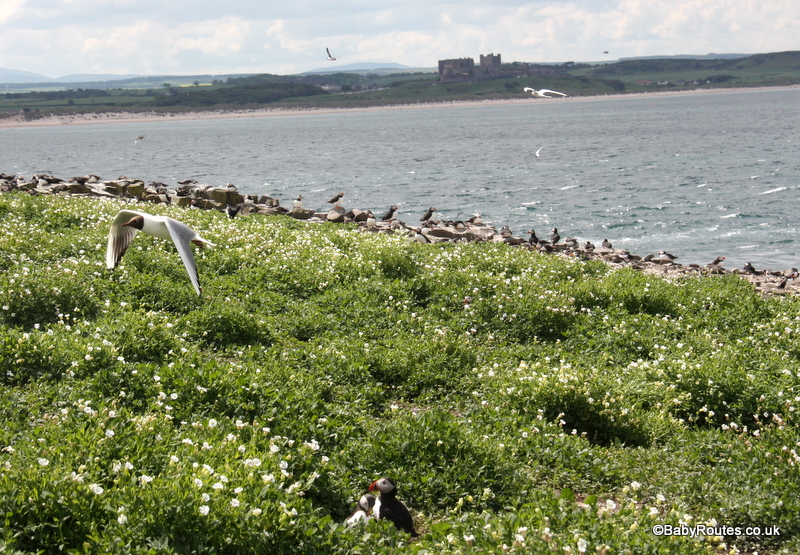 The beautiful backdrop of Bamburgh Castle from Inner Farne.

One last lingering wander back through the diving arctic terns to the boat and our trip to Inner Farne was over. Far too soon we were nudging once more back into Seahouses Harbour, where an afternoon on Bamburgh beach and fish and chips on Seahouses harbourside awaited us. It had been an absolutely magical few hours and an experience I hope to repeat often in the years to come

Practicalities of visiting the Farne Islands with young children

Permanent link to this article: https://babyroutes.co.uk/farne-islands-northumberland-with-children/ 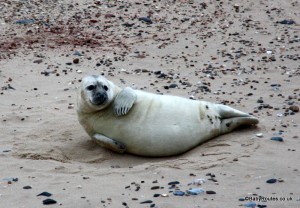 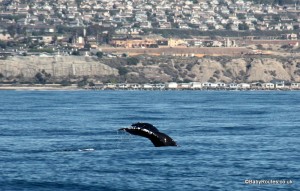