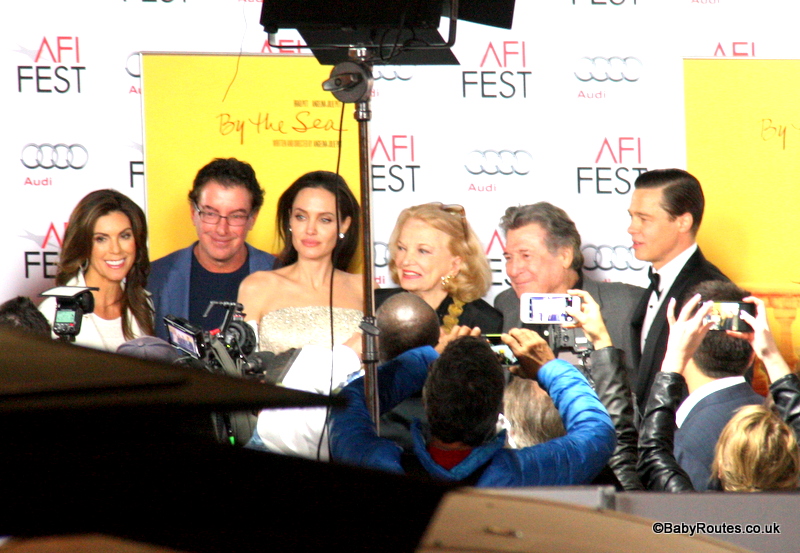 …continued from Part 1: Griffith Park & Hollywood – From the Stars Above…

Hollywood and the Stars Below

After days spent exploring the high ground that towers iconically over Hollywood’s famous streets, it was time to head back down from the hills. Back down at the bottom of the canyons our drive back home took us through opulent, green residential areas – home to the rich and occasionally famous. On the way to Bronson Caves we passed the security-gated Valley Oak Drive – supposedly one of the approach-ways to the LA residence of the Jolie-Pitt family. There are several other celebrity faces living nearby, some of whom, like the Jolie-Pitts, that even I have heard of.

I can see why this area is popular. If I had my choice of LA living and an unlimited budget I’d be tempted by these leafy, suburban streets in the shadow of the canyon. They are outwardly far less showy than the in-your-face wealth of the Beverly Hills mansions but I can’t imagine their interiors lack for much. The setting is in my humble opinion much nicer, tucked away from the city’s hustle and bustle with the call of coyotes from nearby Griffith Park a reminder of the nature on your doorstep. The only downside must be the likes of yours truly driving through the neighbourhood en-route to the start of one of the many popular hikes in the area – something that has brought the locals into conflict with ‘the rest’ in recent years. It seems that those living in the shadow of the Hollywood sign are just as prone to a spot of NIMBYism as the best of us. 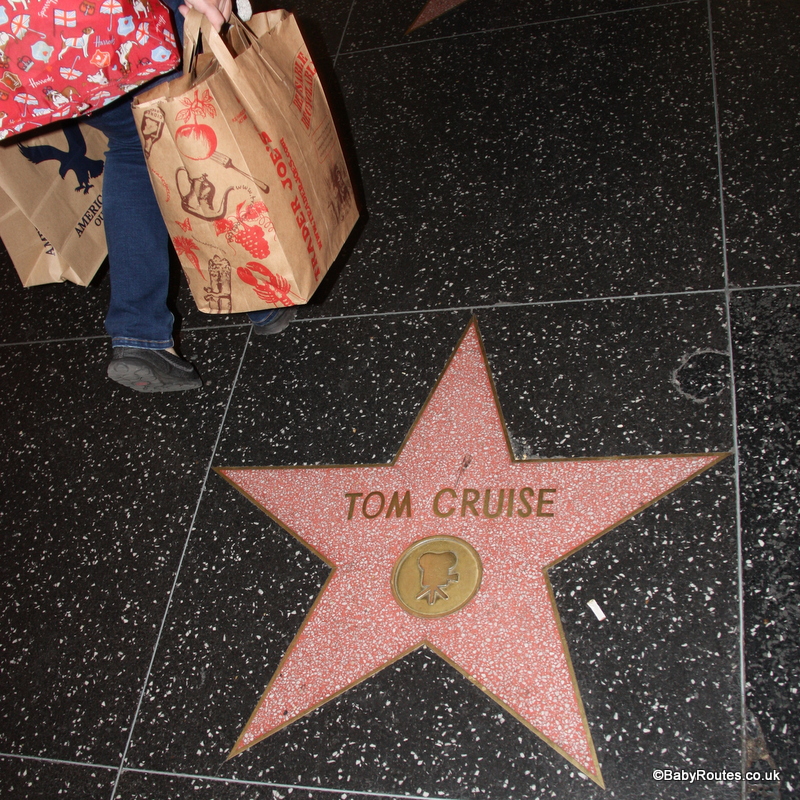 Walking on the stars at the Hollywood Walk of Fame. I’d definitely heard of this one too…

As our week in the Hollywood Hills drew to a close I decided I really ought to go and take a look at Hollywood itself. By this point, Roo was a lot more switched on to the idea of films, film-stars and filming locations and she was keen to go and see the famous names of Hollywood’s greats set in their stars on the Hollywood Walk of Fame.

Reluctant to lose a day’s outdoor exploring to city sightseeing, I arranged to meet my husband after work outside the Grauman’s Chinese Theatre. The Chinese Theatre is one of Hollywood’s iconic buildings – home to many film premières and location of the hand and footprints of some of Tinseltown’s most celebrated film personalities. I knew as soon as I hit the traffic on Hollywood Boulevard that something was up. It was painfully slow driving, even for LA. As I pulled up to my intended parking lot just behind the Chinese Theatre a big ‘Lot Full’ sign flashed ominously in my face. Below it was something scribbled about event traffic only/. The adjacent lot was just the same.

In desperation I pulled over to ask the attendant for directions to the next parking lot. She saw the kids in the back and took pity on me. I was immensely grateful as I turned down the ramp under the disapproving glare of my fellow frustrated motorists. Travelling with kids definitely has perks sometimes, as does what I had written off until then as LA’s ridiculously overstaffed car parks! I felt decidedly VIPish as I zoomed down the ramp. 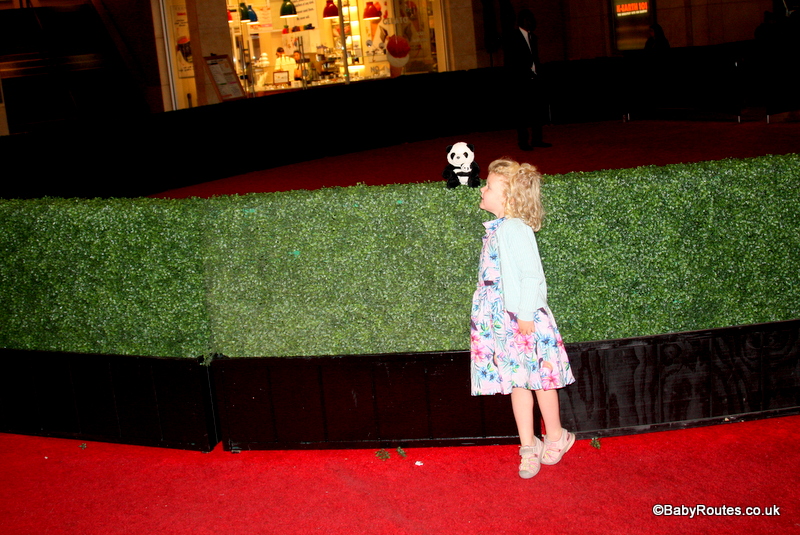 Inside the Hollwood/Highland Mall the red carpets were out for what seemed like some kind of radio personalities award at Dolby Theatre. I didn’t recognise the names on the posters but Roo enjoyed prancing about on the red carpet.  Eventually my husband joined us outside on Hollywood Boulevard and Roo had a happy time spotting the stars in the pavement on the seemingly endless Walk of Fame, surrounded by the likes of the Guinness World Records Museum, the Church of Scientology info centre and Hollywood’s Madame Tussauds. 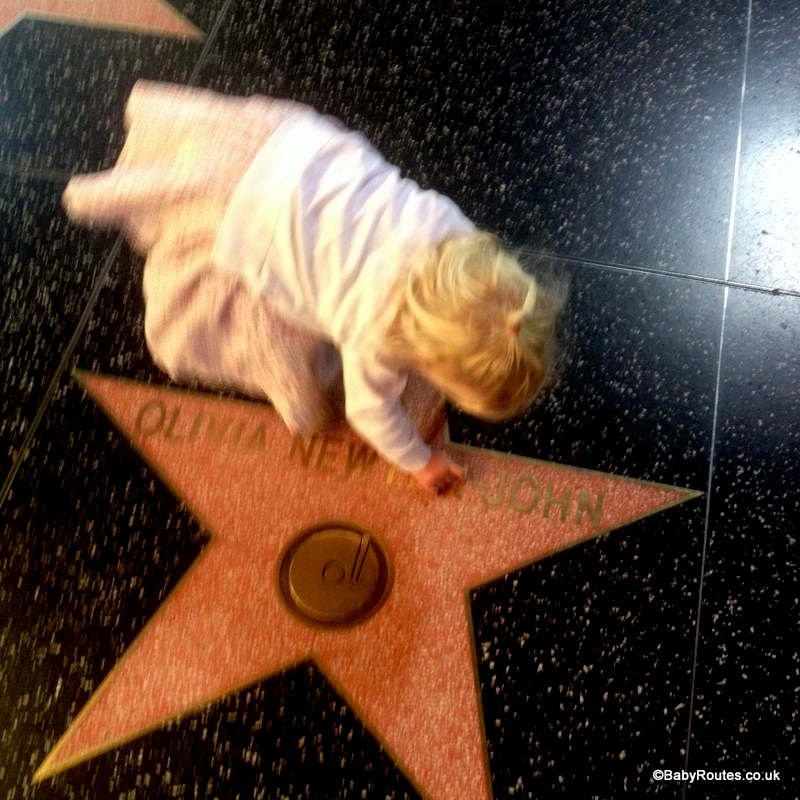 Beth’s favourite star was Olivia Newton John, quickly passing over Ricky Martin just next to it.

Around us milled many oddly dressed street artists, if you can call them that. More like opportunists dressed up as famous movie characters taking any chance to try and cajole you in to a photo with them and then demanding money from the unsuspecting in my mind. Perhaps I’m just a killjoy! 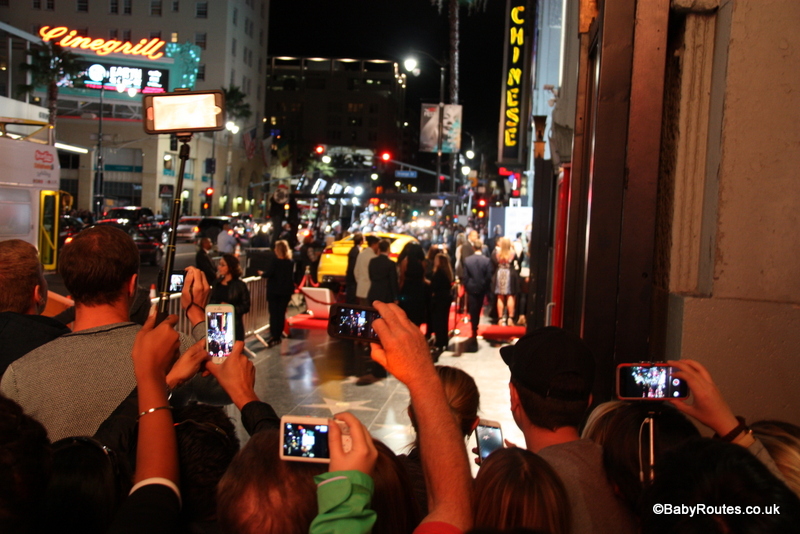 What a time to need a selfie stick…staking out the stars on Hollywood Boulevard.

It was at this point that we noticed a large amount of people milling about next to crowd control barriers on the pavement in anxious expectation. We asked them what they were waiting for. ‘It’s the movie première of ‘By the Sea” the excited bystanders informed us, obviously surprised at our ignorance..

I’d definitely heard of them. We decided to stick about for an authentic Hollywood experience. What were the chances? 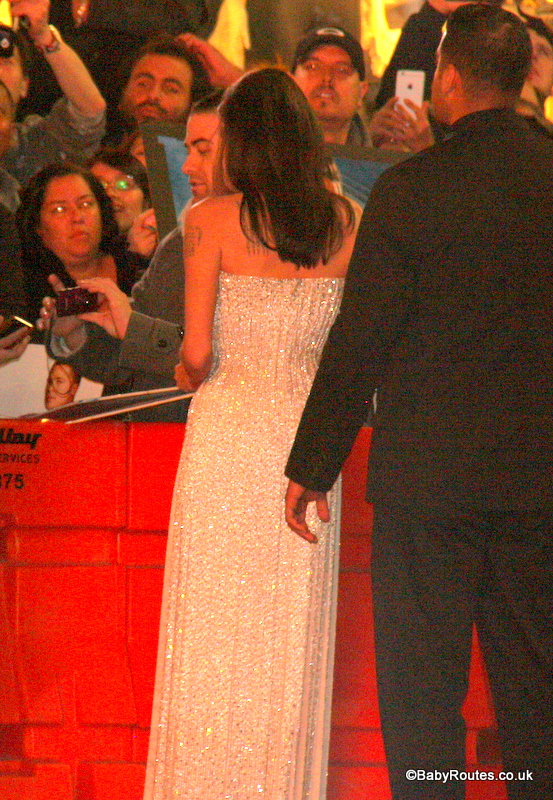 A dazzling dress from Mrs. Jolie-Pitt, looking every inch the movie star.

A decent wait later and the Jolie-Pitt car drew up pretty much next to us. I can confirm Brad Pitt is a gentleman, leaping out the car and whizzing straight round to open the car door for his glamorous wife. Angelina was dressed in the most Hollywood-ish of gowns – a dazzling sparkly white/silver number that dazzled and danced in the millions of camera flash-lights as she spirited across the road to greet the now considerable crowds on the opposite side. She looked every inch the Hollywood star and Roo’s eyes were wide at this fairytale like vision of a famous actress.

The spell didn’t last long – whilst her little sister attempted to excitedly join the crowd in chanting ‘Brad Pitt’ and ‘Angelina’ in her lispy toddler voice, her big sister, perched on top of my shoulders mimicking her loudly with the alternate version of  ‘Bad Fit’. Needless to say the famous duo didn’t come back to our side of the street or invite us in for the première. I can’t imagine why not.

Once the Jolie-Pitts were safely back inside the Chinese Theatre forecourt, dutifully undertaking what looked like a very dull series of interviews and photo-calls, we nipped across the road for some quick supper. With our preschoolers in tow we decided against nearby Hooters, nipping into Tex-Mex fast-food chain Baja Fresh Mexican Grill to settle our now starving children’s tummies. From the upper windows we got a bird’s eye view of the remaining action outside the theatre. Definitely a place to go for good views with a seat should we ever turn into serial LA move star spotters! 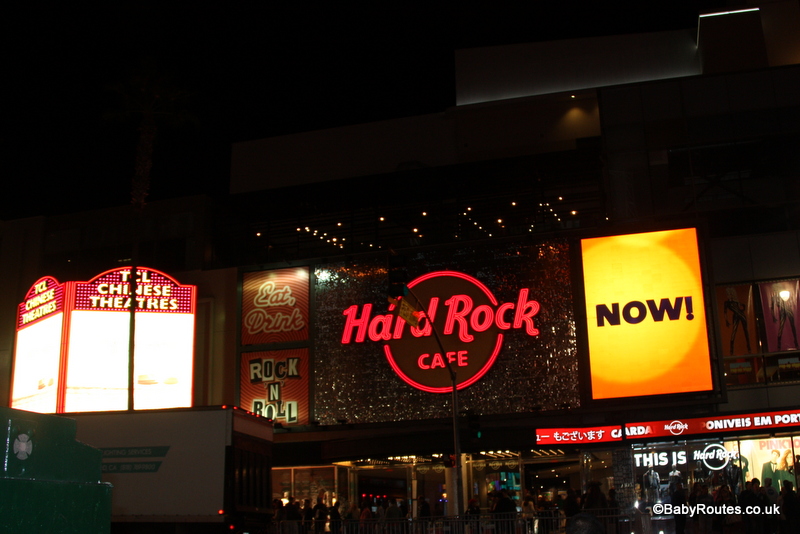 So that was our very Hollywood experience. On our very last day in LA, on a detour enroute to the airport, we cruised around Rodeo Drive and Beverley Hills to complete our city glam experience in about as much depth as we wanted. I admit to being drawn into the crowd and being a little star struck by our Hollywood celebrity encounter and judging by the pic below Beth may be considering the unlikely future career of a Hollywood pap! The ostentatious gated mansions of Beverley HIlls and posh names of Rodeo Drive left me unmoved though  – I much prefer the charm and bustle of the designer shopping area near the Spanish Steps in Rome, not that I would ever be actually going in the shops in either location! 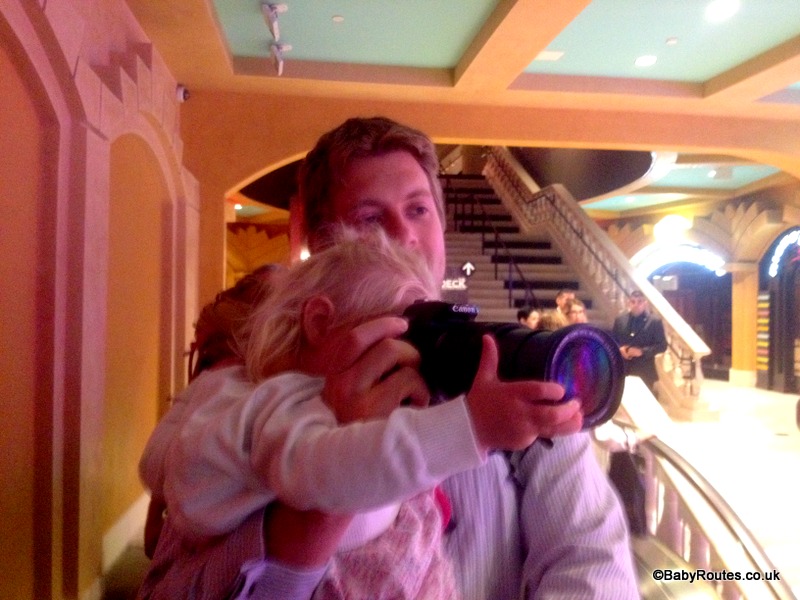 Beth zooming in with Daddy’s camera on the Jolie-Pitts at the By the Sea premiere.

All things considered, I enjoyed the Hollywood heights of the canyons and their amazing views more than the glitz and glamour of Hollywood itself. You can take a country girl into the city and all that, but give me a mountain or two and I’m happy as Larry. One thing is for sure- Hollywood and its surrounding neighbourhoods most definitely have star factor of both the natural and human kind. It was also fun once again to find a way to escape in even the most well-known city locations for something a little wilder and secluded.

Permanent link to this article: https://babyroutes.co.uk/hollywood-boulevard/ 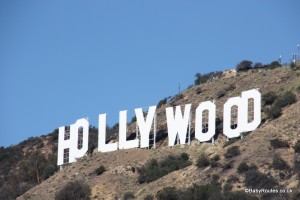