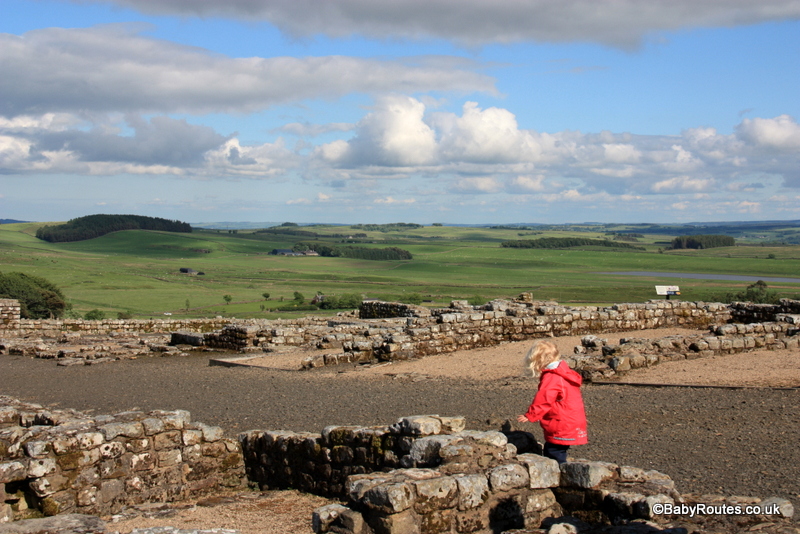 It is almost impossible when travelling through Nothumberland to escape constant reminders of Roman Britain, even around 1600 years after the Romans finally left Britain!

We arrived in Northumberland on a Friday evening in June.  Despite being nearly 2300 at night, the sky was that deep murky blue-black of mid-summer. Not quite dark but dusky enough to keep its landscapes a mystery to the weary traveller until daybreak. Even so, as we left the main roads behind us and headed into Northumberland’s wonderful countryside, there was no mistaking the nature of the seemingly endless straight road guiding us to our accommodation. Only a Roman could make a road quite that straight.

Ruins with a view. It’s not hard to see the tactical advantages of Housesteads Roman Fort’s location.

Northumberland’s most famous association with the Romans is of course Hadrian’s Wall. Stretching 73 miles long from east to west across northern England, it marked the north-western most reach of the occupying Roman armies in Britain. The wall itself was constructed on the orders of Emperor Hadrian as a defensive measure against raiding Barbarians on its northern side. Soldiers patrolled the wall and observation towers and gateways were installed. As with so many Roman constructions, Hadrian’s Wall has stood the test of time with substantial sections of it still very much in evidence today.

Hadrian’s Wall tops some of the most spectacular stretches of Northumberland’s wild, open landscape. From the remains of the wall you can often see for miles on either side – no doubt part of the Roman guards’ master-plan. As a result of the stunning scenery it has become a popular route for hikers. There is even an official National Trail route stretching 84 miles from coast-to-coast, following the line of Hadrian’s Wall. We wouldn’t have time to take in the National Trail (one day!) but a family walk along Hadrian’s Wall was most definitely on our agenda for our Northumberland holiday. 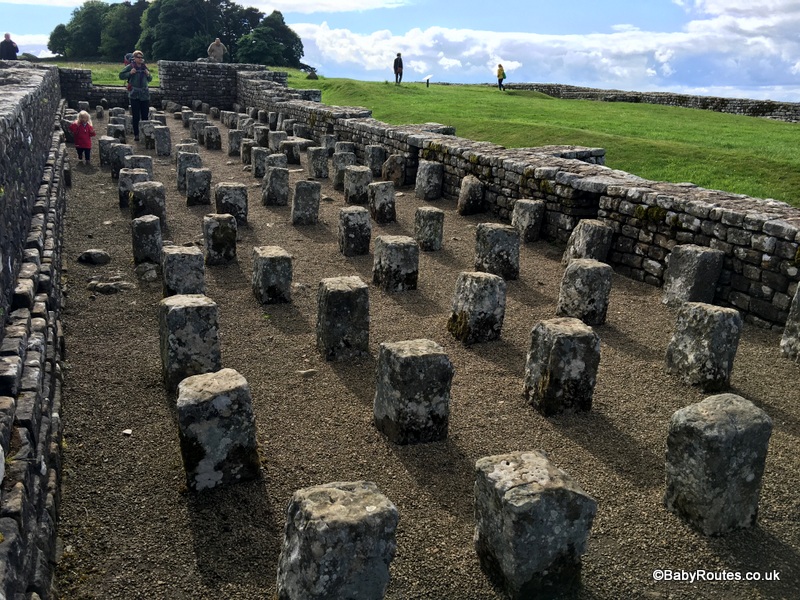 As my husband and I discussed walking routes along Hadrian’s Wall, it soon became apparent that our four and two year old girls had no clue what we were on about. I am always forgetting that my two mini-explorers are just starting out on colouring in their blank canvas of world knowledge and history. It wasn’t until Roo asked me why we were going to walk along a wall that I realised the Romans might as well be a herd of two-tailed multi-coloured goats as far as she knew!

To fill our daughters in, we headed to Housesteads Roman Fort. Housesteads is the most complete remains of a Roman fort in Britain. With its own visitors’ centre it also promised to provide a bit more history and insight than our own distant and hazy memories of Roman history from school. Given their age, we didn’t expect the trip to Housesteads to take that long. No matter how well preserved and restored, we didn’t think stone ruins were likely to hold the attention of preschool Roo and Beth. Plenty of time to carry on for our Hadrian’s Wall hike afterwards. Or so we thought… 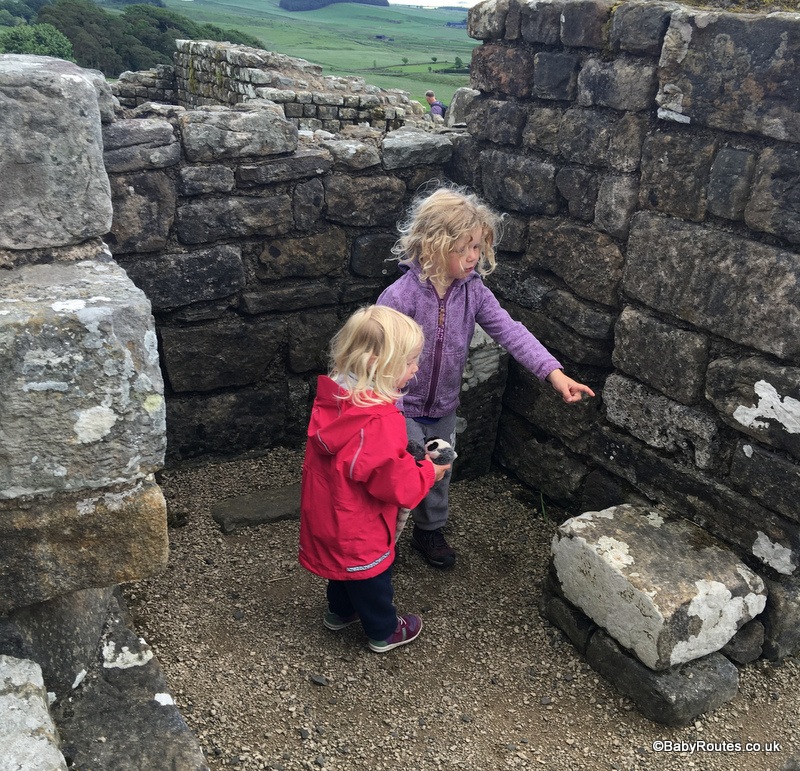 Beth taking Carlost the Lima for a wash in the bath house. Under her superior’s direction of course!

How wrong we were! Housesteads Roman Fort, or Vercovicium as it was known to the Romans (meaning place of the effective fighters), captured all our imaginations.

Day-trippers approach the fort by a short (but steep uphill) walk from the car park, via the National Trust visitor centre. As you ascend through areas once occupied by the Roman soldiers’ families and local civilians, the true scale of the landscape around you is revealed. This is a truly wild spot which offers unspoilt views stretching out all around you. The lack of any major modern development within sight certainly helps transport you back in time. Those Romans certainly knew how to pick a scenic look-out point! 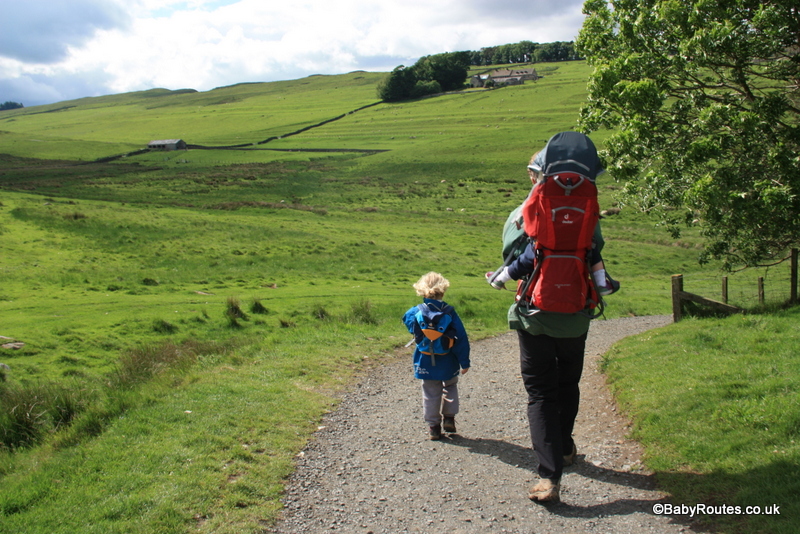 The route up to Housesteads Roman Fort. Well worth the walk.

At the top there is a small visitors’ centre run by English Heritage. The girls were far too excited to call in at the start of our visit. We headed straight for Housesteads Roman Fort instead.

Housesteads surprised us by just how well preserved and restored it has been. All the same, it is amazing what good management of a historical site can do to make an experience family friendly. Roo quickly spotted the information boards aimed specifically at children. Following the story of Felix, the Roman soldier, around the site, she (and we) quickly picked up on the crucial elements of what the different ruins were and how life had been for those Roman soldiers inhabiting Vercovicium all those centuries ago. Little gems like explaining that the holes in the granary foundations were not just for circulating air to the food stores but also for releasing dogs in to catch any rats helped to bring what could have been otherwise dry historical facts for a four year old vividly to life. 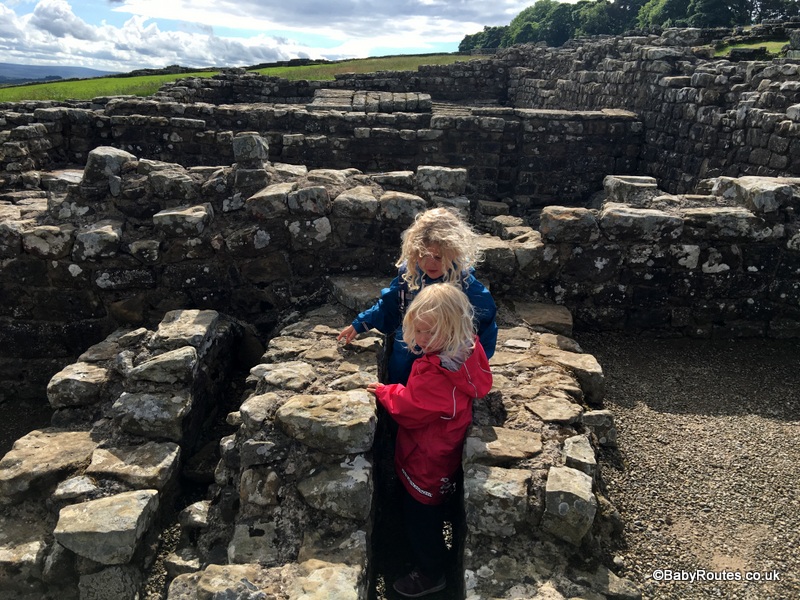 Both girls loved exploring Housesteads Roman Fort. From admiring the relatively grand-sized house of the Roman commanding offer, snuggling under their coats pretending to be soldiers bedding down in the remains of their tiny rooms that housed eight men or pretending to take a bath in the wash-house, they were both in imaginative play heaven. Being an old fort, Housesteads has fairly defined boundaries making it a good place to let younger children roam without too much worry. Of course, perched at its northern side is the remains of Hadrian’s Wall itself. The wall here is substantial still and with a decent drop on the other side of it, so it pays to take care with over-excited mini-Roman soldiers on the look-out for marauding Barbarians when visiting that area of Housesteads. Our two were still playing Romans and Barbarians several days later. 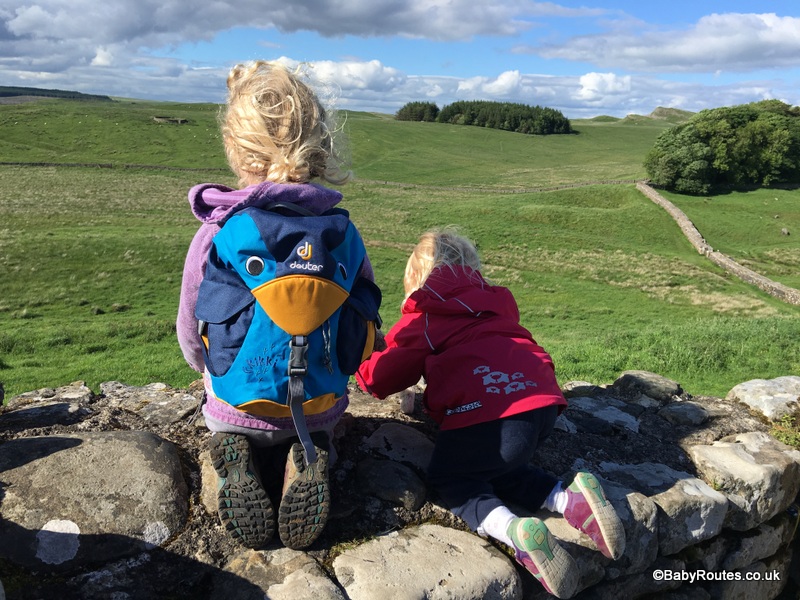 Our two mini Roman sentries on duty looking out for Barbarians from Hadrian’s Wall.

By the time we eventually managed to drag the girls away from playing Romans, it was far too late for our walk. Instead, we popped into the visitors’ centre and caught the final short film of the day, detailing the history of Housesteads. It’s a shame we didn’t have a little more time. Even though the visitors’ centre is just a couple of rooms, there is a surprising focus on children. Ours enjoyed a quick dress-up as Roman soldiers and feeling the chainmail samples. 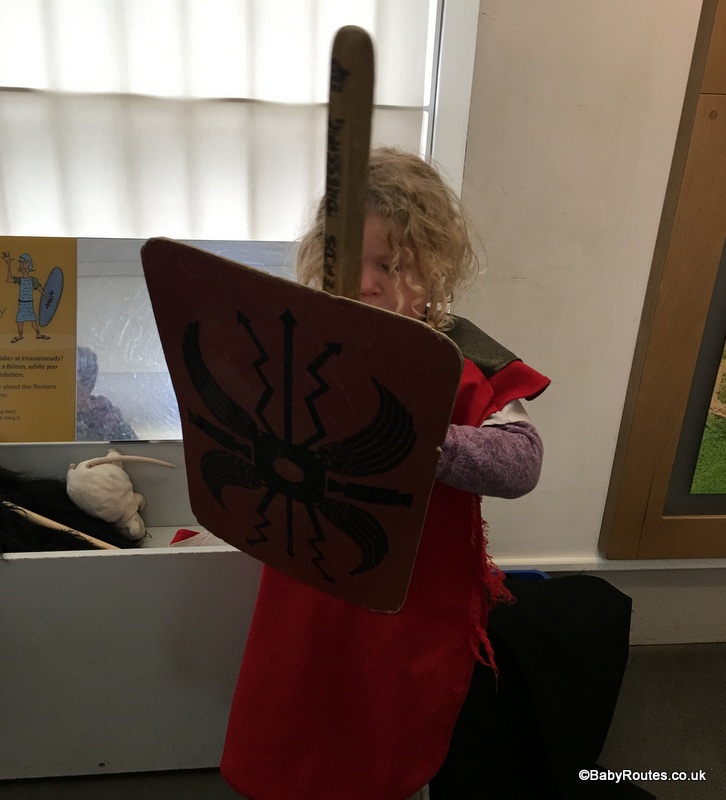 Dressing the part of a Roman soldier in the English Heritage visitor centre.

Roo left clutching a book on Roman history and asking why we didn’t have time to walk by Hadrian’s Wall. Whilst her sister is too young for Housesteads to have made any long-lasting memories, Roo is just of the age where ‘field trips’ are beginning to make a huge impression. Children amaze me with what they remember from some of the more hands-on days out. After so much fun exploring Roman life amongst its old walls, Housesteads Roman Fort had certainly made a big impression on Roo. This was concreted when she got to try out the mock-up of the Roman loos on the way out… the actual ruins are located in the South-West corner of Housesteads Roman Fort and are lauded as a most remarkable set of remains from Roman Britain. 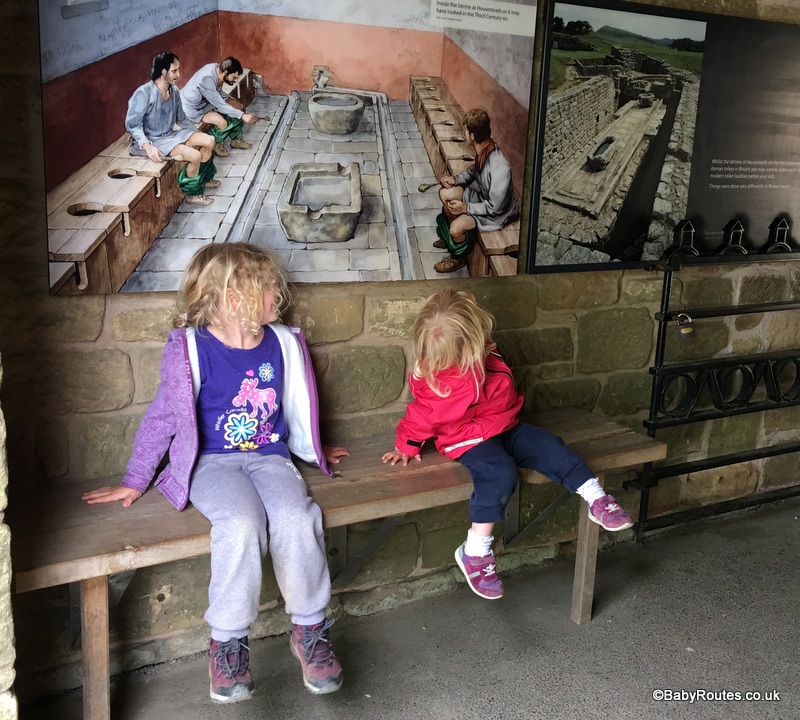 On the last day of our trip we did finally made it back to Hadrian’s Wall for our family walk. As we patrolled along the top of nearby Steel Rig, Roo knew exactly what it was all about. In fact she’d spent most of the preceding days spotting everything Roman and quizzing us endlessly about why the Romans were in Britain and various aspects of Roman life. I was glad we’d got that book – for our sake as much as hers!

Housesteads Roman Fort is located just off the B6318 between Greenhead and Chollerford.

There is a large pay and display car park. If you need to pay with card, as we did, use the machine closest to the visitor centre entrance. At the time of our visit, parking cost £4 for the day. Your parking ticket is valid for the same day at other roman sites along Hadrian’s Wall too.

Housesteads Roman Fort is jointly managed by English Heritage and the National Trust. If you are a member of either organisation, entry to all parts of the fort and information centres are free upon presentation of your membership card. Non-member need to pay an entry fee or buy membership. The latest prices can be found on the Housesteads Roman Fort website. 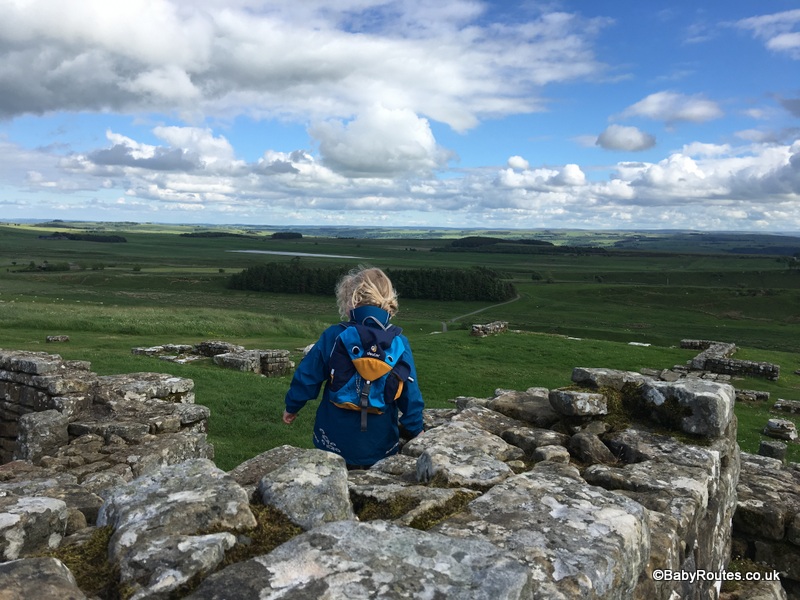 Whilst pushchairs are technically allowed into Housesteads Roman Fort, the ten minute walk up to the Roman fort itself is fairly steep and on uneven ground. We took a child carrier for two year-old Roo. Prepare for the walk up to include lots of short stops for very little walkers and take coats, layers and supplies with you. It is exposed at the top of the hill and it’s not so easy just to ‘nip back to the car’ should you need something!

There are baby changing facilities and toilets at Housesteads based at the bottom National Trust visitors’ centre. There are also picnic benches and some snack, ice cream and other refreshment options. Those with pocket money to burn will find a souvenir shop and plants to purchase! Roo of course had to have a postcard of the Roman loos…

Permanent link to this article: https://babyroutes.co.uk/housesteads-roman-fort-hadrians-wall/ 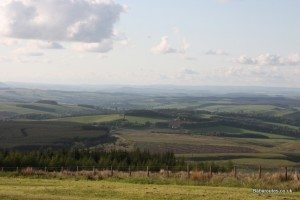 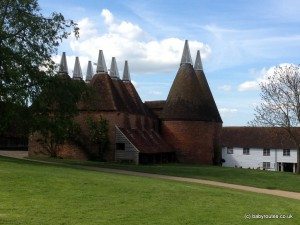 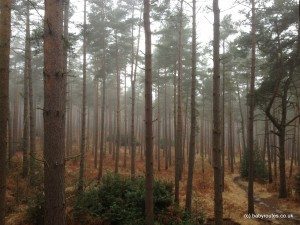