How to make an outdoor shoe storage box.

Departing for Scilly: Voyaging by Sea on the Scillonian III 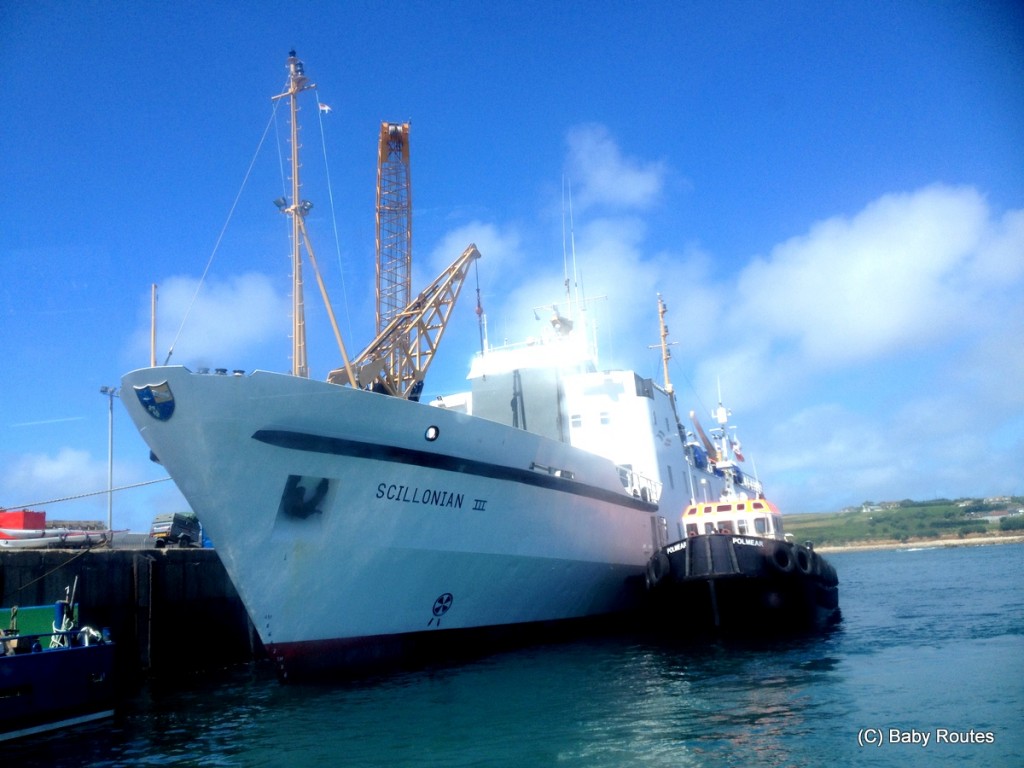 In our household the moment of departure for a trip is always the start of the holiday. Up until that point we are in chaos- washing last minute clothes, watering plants, catching children, unpacking and repacking for the third time…Then, after the ring of an uncharitably early alarm clock, it is time for the point of no-return. We are off. The release after all that buzz of adrenaline makes me feel euphoric and excited. The holiday has begun.

As speedy as my pre-departure preparations may be, the journey is another matter completely. After all that preparation it is a time of transition, a pocket of calm, of expectation, of removing ourselves from our usual routines and territories and creating space for new experiences. The manner in which we arrive somewhere directly impacts perceptions of the place itself. We are only human. Association of experience and a place or people is one of our strengths and also one our greatest failings.

Enjoying the experience was at the forefront of our minds when booking our travel out to the Isles of Scilly recently. We had a choice of ferry or aeroplane. We of course chose both.

The Scillonian III spotted whilst out island hopping. It became a familiar friendly sight during our stay.

Revelling in the joy of not needing to go anywhere fast, we decided to take the Scillonian III from Penzance for our outward journey. With a sailing time of 2 hour 45 minute, this lazy journey by sea helped to prolong the anticipation about the week to come, It added a remoteness to the Isles of Scilly and an expectation of adventure in this mysterious location, which for just a few hours more, remained completely unknown to us. We delighted in peeling off the wrapping paper of this unfamiliar place as slowly as possible, drinking in the small clues our passage gave us as we drew closer to the Isles of Scilly.

Our crossing on the Scillonian III to the Isles of Scilly was perfectly calm – a complete antidote to the stressful and time-pressured train journey my husband had made to get down to meet us in Cornwall the night before as London tried to keep its sticky grasp on him by throwing all its toys on the tracks. I have heard that the crossing is not always so smooth but it is often made up for by the regular appearance of dolphins following the boat. We didn’t see them on our crossing but friends of ours were luckier last autumn. Instead, we enjoyed watching the mainland slip away, waved to unmistakable St. Michael’s Mount and were treated to a sea-view of rocky Lands End, the UK’s most South Westerly point on mainland. 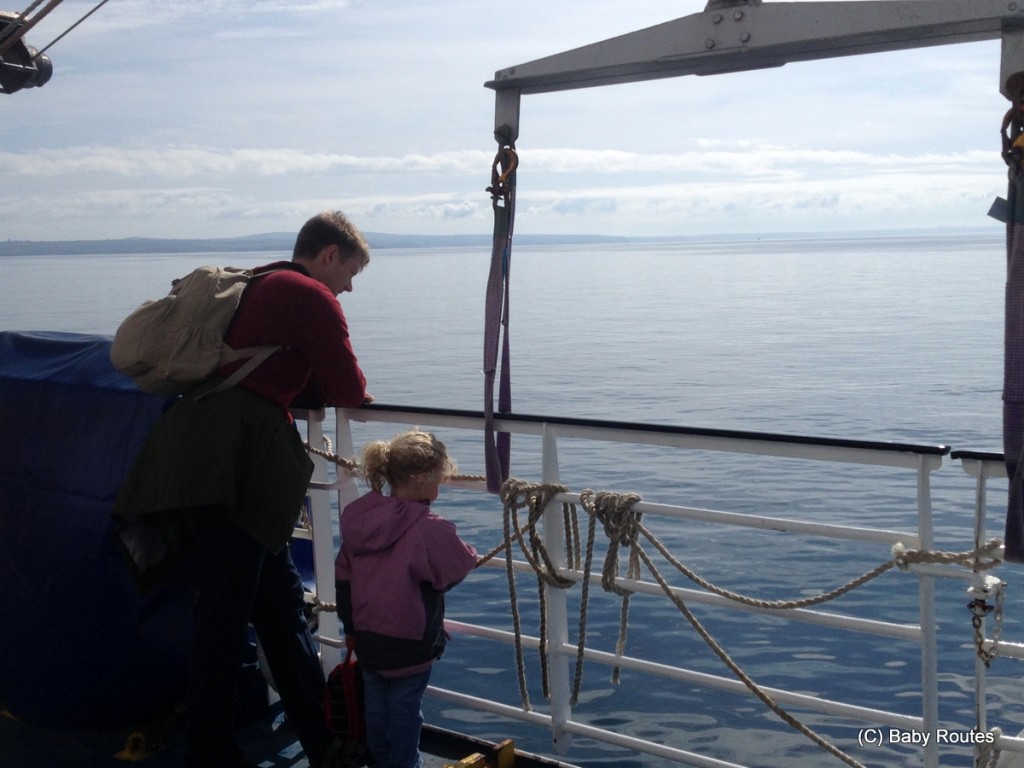 Lots to see out on the deck of the Scillonian III

The decks that morning were bathed in sunshine and every single seat out in the fresh air was taken. My advice would be to get to the boat fairly early if you want a good spot outside. The Scillonian III was full of returning visitors who obviously knew exactly where the best spots were!

Not that it mattered. Despite eventually finding a sun-trap on deck to enjoy, the girls wanted to explore non-stop and we walked many circuits of the boat, peering over the rails, waving to passing boats and inspecting the dogs lazing about on the deck with their owners in blissful relief at not being left at home. The joy of travelling by boat with children is precisely this freedom to move about. That and the never-ending fascination of watching all the loosening of ropes, winding of cranks and hoisting of freight. 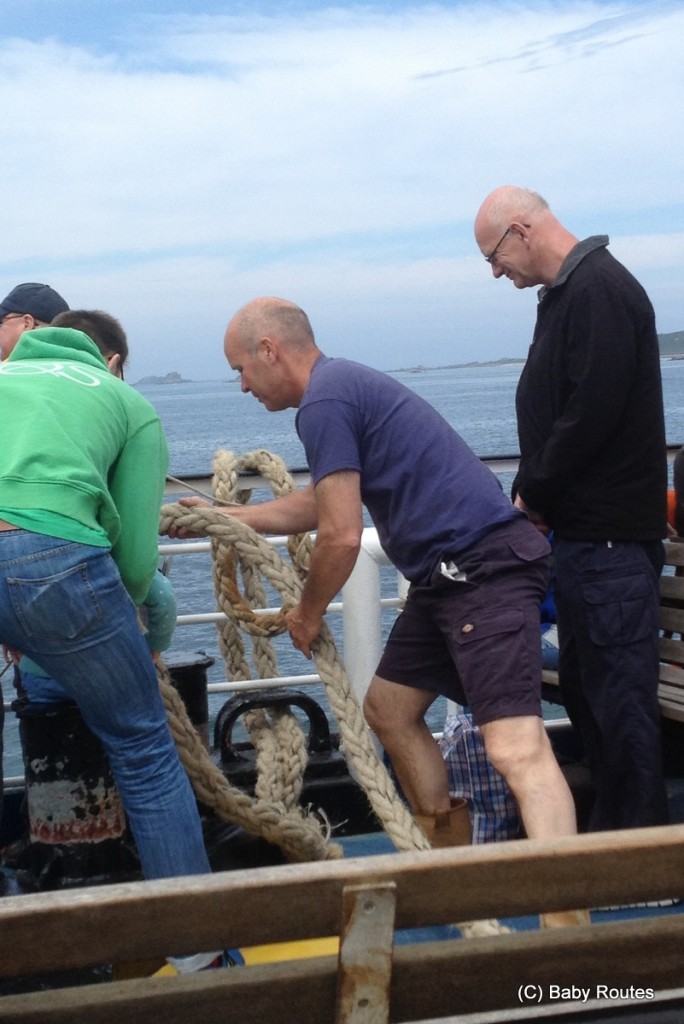 Preparing for the arrival of the Scillonian III at St. Mary’s with plenty of on-deck action.

Downstairs the largely empty cabins provided spacious, sparkling clean and comfortable seating. There were two catering areas, providing a welcome punch of strong coffee to brush off our morning cobwebs. An on-board shop lurked beneath on the lower deck with essentials for the journey and guides, maps and other bits and bobs to aid your time exploring the Isles of Scilly or provide some light entertainment for children on the voyage. 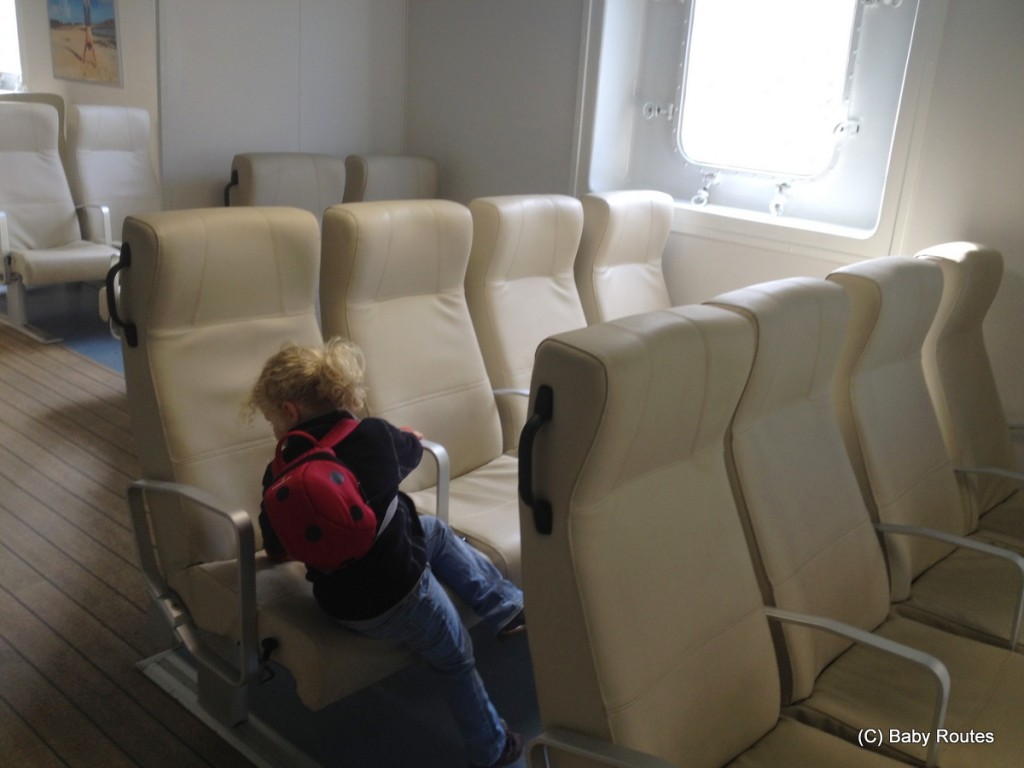 Tired out by their early start both girls eventually nodded off on deck, lulled by the salt air, gentle rocking and comforting hum of the ferry. As they snoozed the first distant glimpse of the Isles of Scilly appeared. It is a completely different experience arriving at an archipelago by sea. No familiar cross-channel bank of land loomed towards us. Instead twinkling little dots of green and brown lay scattered over a sparkling sea as if sprinkled there by chance. After all that expanse of water, it felt as though we had somehow chanced on a secret kingdom, the kind of place you read about in ancient tales of seafarers. It’s hard to believe the theory that the Isles of Scilly were once connected to the mainland. 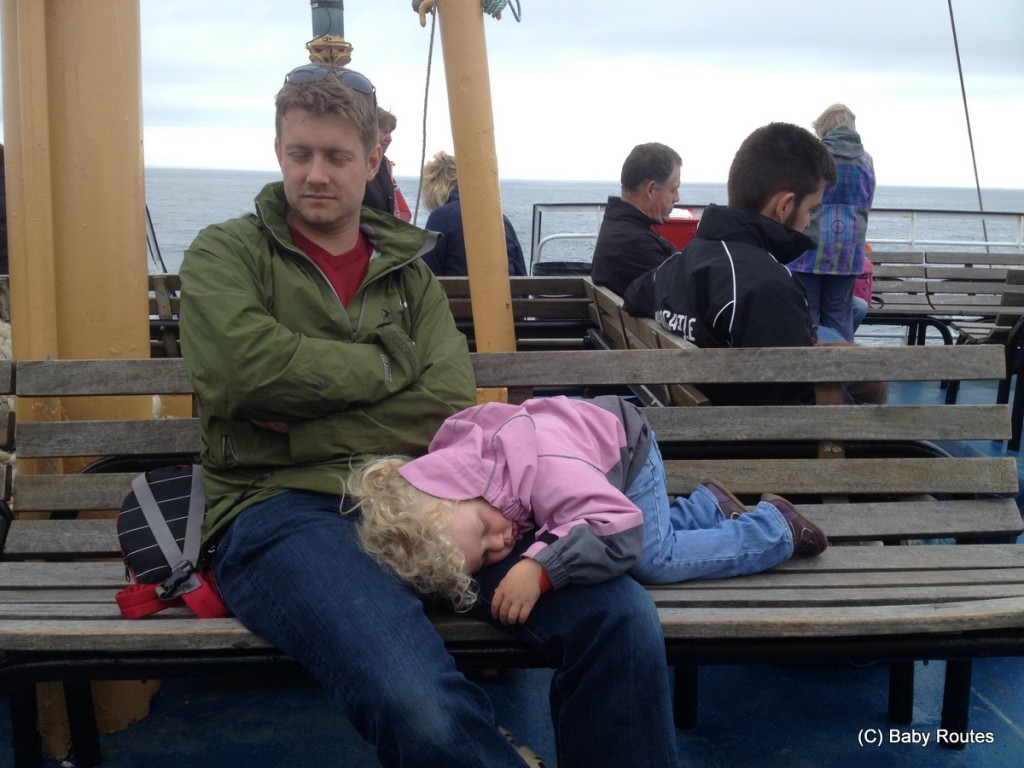 Snooze time on the decks of the Scillonian III

Drawing closer the islands took on distinct shapes. I was amazed at how many tiny uninhabited islands there were, their rocky sea-bird coated edges spiking up in warning to keep a safe distance. Many ships from less technological eras have met their doom in these waters. Further on the islands became gentler. Long stretches of white sand dazzled along the shorelines of Tresco and St. Martin’s. A tiny campsite perched above yet another sandy beach, its tents gently waving a salute as we sailed by. Soon these islands would become familiar to us. We would learn to spot the white and red day mark of St. Martin’s and the radio mast of St. Mary’s. Our week of island hopping would teach us to learn a landscape by boat but it also meant that next time we visit the Isles of Scilly our arrival would lose its shroud of mystery, exchanged for a familiar cloak of happy memories and recognition. 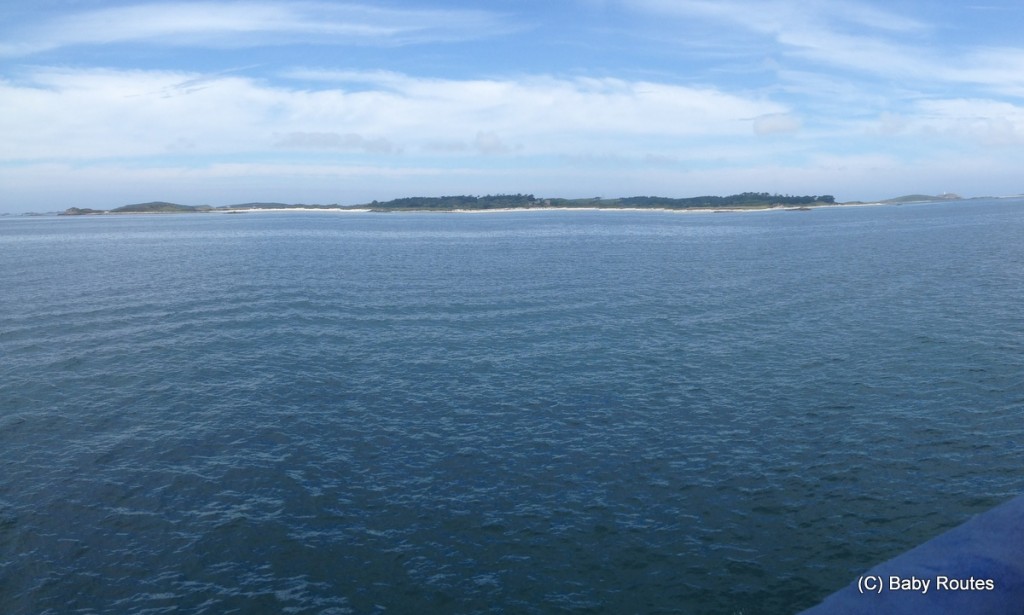 First views of the Isles of Scilly that would soon become so familiar.

Just as we drew toward St. Marys with most of the passengers crowded on one side of the ferry for the best views, the spell was broken. Roaring overhead a helicopter looped round the Scillonian III, giving the girls a rude awakening. It returned, banking sharply above the ferry and dangling impossibly above us in mid-air. Quite what it was doing there, I don’t know. Perhaps every arrival of the Scillonian III ferry is greeted with this show of daring flying? It did succeed in redistributing the ferry’s passengers more evenly over both sides of the deck as passengers turned their cameras away from the shoreline and upward instead!

As suddenly as it arrived the helicopter departed and we were left to the bubbling tranquility of Hugh Town harbour as we drew into the quay on St. Mary’s, our arrival setting the islands’ clock with its disgorgement of visitors and freight. Forget the stereotypical grim exit through an industrial ferry port. The most intrusive thing slightly marring an otherwise picture perfect habour-side panorama was a crane and platform being used to extend the quay a little. Here the Scillonian III ‘s dock was simply the end of a stone quay used more frequently for the myriad of local water taxis and ferries. Around us bobbed an array of little boats, watched over by the deceptively slumberous lifeboat. Ahead the small buildings of Hugh Town smiled a welcome. Had we known it, we could have waved to our hotel room perched up on the hillside in its panoramic repose at the landward end of the quay. 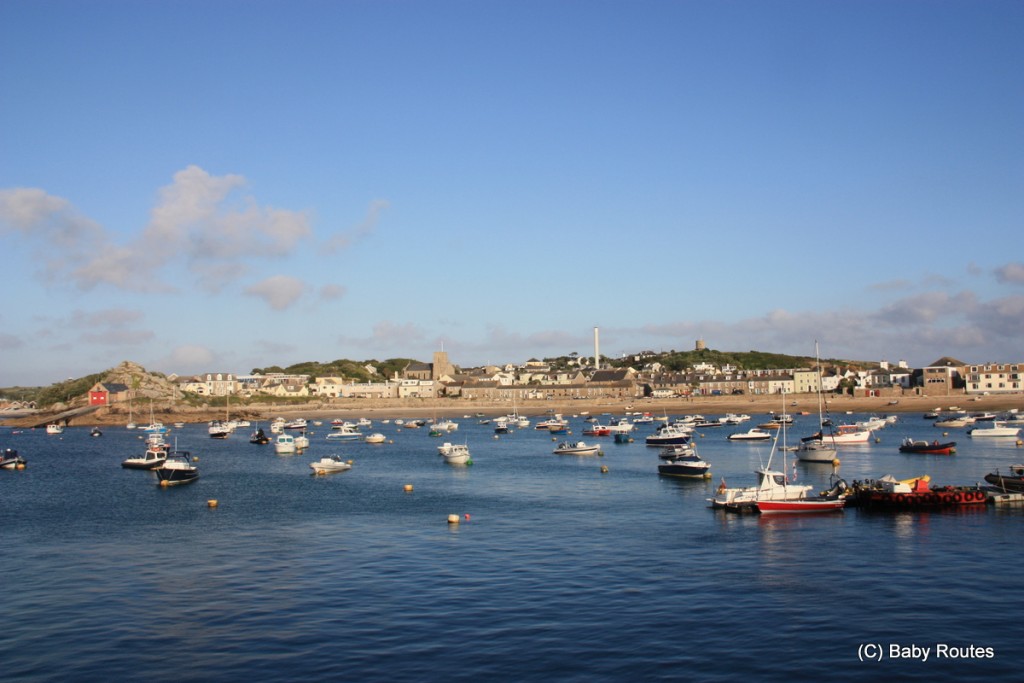 A small wait to disembark and then we were off down the quay, taking a few moments with Roo to watch the bags being hoisted off the ferry and to examine the many boat trips in offer, their itineraries sounding the more adventurous by being scrawled on blackboard with chalk. There was no need to wait for our luggage. Our bags would follow us up the quayside to our hotel a mere ten minutes after us. Instead of flustering about for tickets, luggage and exit signs we casually strolled up towards Hugh Town and Tregarthen’s Hotel, drinking in the sound of gulls mewing, the rocks and swaying weed on the bottom of the seabed below us, the lungfuls of clear, fresh Scillonian air. We had arrived. 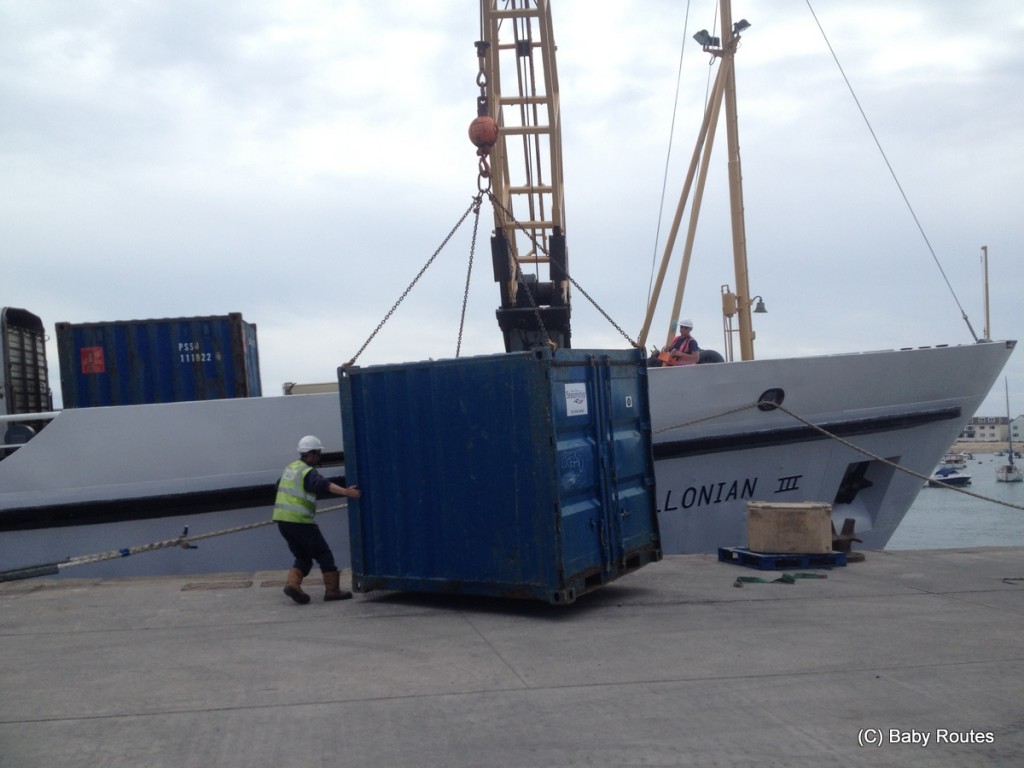 Watching the freight being taken off the Scillonian III was a favourite moment of Roo’s.

The Scillonian III ferry connects Penzance and St. Mary on the Isles of Scilly and runs daily between March and November. Fares start from £43 one way with concessions for children and infants. You need to be there an hour ahead and there are some weight restrictions on your luggage you need to check (though it’s pretty generous). You can find full journey and booking information on the Isles of Scilly Travel website.

You can get day tickets for the Scillonian III ferry. I’m not sure how relevant this is to families who might find the double journey a bit long to merit a quick trip but it is possible if you are down in Cornwall and fancy a taster. Be warned though – a day will definitely not be enough!

Take layers and a wind-proof jackets for sitting out on deck. Even on a sunny day it can be breezy on the Scillonian III. One couple had a small blanket with them – a great idea if you have luggage room.

Whilst the rails around the deck are pretty child-proof, if you know you’re going to worry then a rucksack with detachable child reigns and packing a baby sling for wriggly/wobbly tiny toddlers is a great idea. We’d have been lost without our sling!

Cars are not permitted on the Isles of Scilly unless you are a local (and even then there are restrictions). Instead, there are two secure car parks that you can leave your vehicle with in Penzance.

We used Isles of Scilly Parking Co. who have premium parking right next to the ferry or economy parking about a 10 -15 minute wander away from the ferry port (drop your luggage off at the ferry first). They also offer the chance to have your MOT or service done whilst you are away which could be handy. Our experience with them was OK. They looked after the car fine but after being told to call when our flight landed on the way back, so someone could come and open up for us, we were told they would ‘be there after finishing off a couple of jobs’ and we were left sweltering in the sun for fifteen minutes or so with two over-excited children. The walk to the ferry ended up being a bit of a power-march too -allow plenty of time! Scilly Parking are the other obvious option. They are based a little out of town but offer regular shuttles in to the quay and a pick-up service.

Our trip to the Isles of Scilly was in partnership with Isles of Scilly Travel and Tregarthen’s Hotel, St. Mary’s. As ever, all writing, opinions, research and sea-gazing daydreamings remain entirely my own. 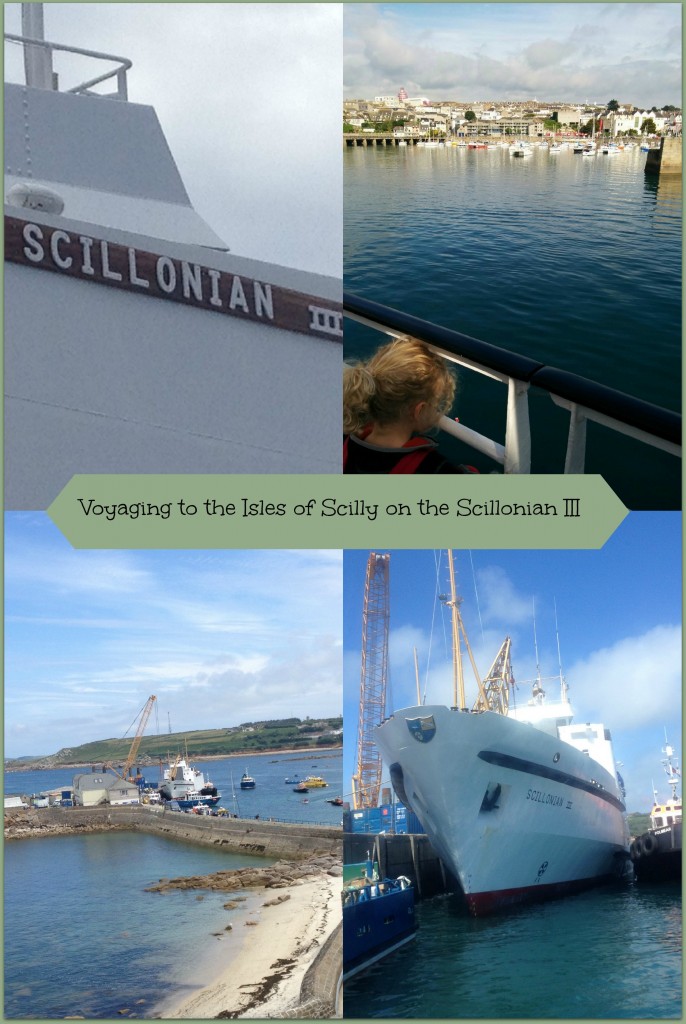 Permanent link to this article: https://babyroutes.co.uk/isles-of-scilly-scillonian-iii/

10 Reasons why I’m not ready to leave the Isles of Scilly. 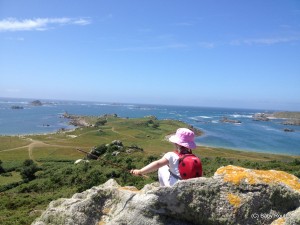