Top of the list for Beth’s summer holiday wish list was learning to ride a ‘big girl bike’.

Beth has been balance biking since she was about two and a half. It’s taken a while (both growing taller and technique) but about nine months after getting going she had both sussed.

On a trip up to Scotland in May she managed 10km along the Tweed Valley cycle path, striding along determinedly, and at considerable speed, just a little behind her big sister who was cycling on her red pedal bike. At that point we knew it wouldn’t be long before she would move to pedals. 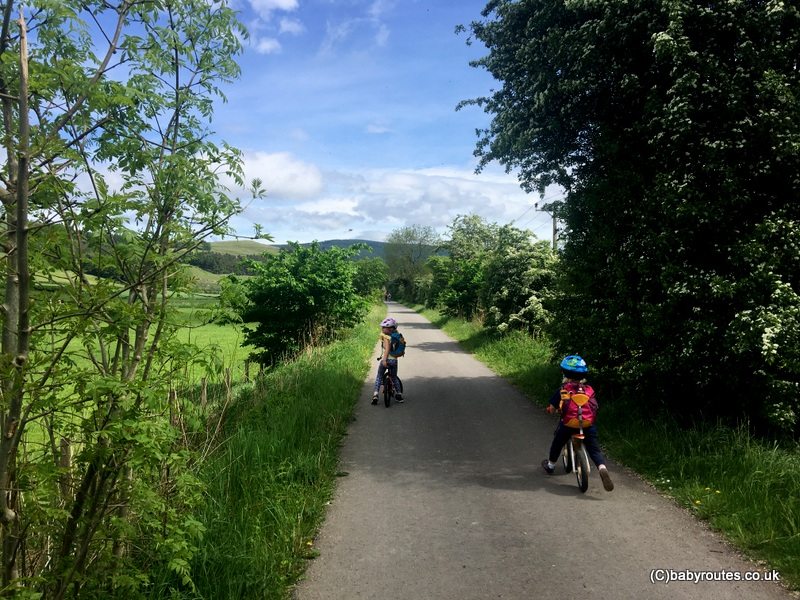 Flying along behind her sister on her balance bike on the Tweed Valley Cycle Path.

As summer approached Beth occasionally smuggled out the coveted Red Dragon pedal bike for secret ‘walks’ whilst Roo was at school. Mostly she just tiptoed clumsily along on it. On one occasion she wanted to have a go at pedaling but quickly became frustrated when she could only make them go backwards. Impatience at a lack of instant success and the sabotaging of her impromptu cycling lesson by her wailing baby brother caused a brief setback.The spark of ambition remained alight though.

It was therefore with perfect timing that an invitation from Ridgeback to attend the launch of the new Ridgeback Kids Club dropped into my inbox. There would be fun cycling skills sessions for the girls and the chance to try out some different bikes, all in the shadow of London’s iconic and sportingly inspirational Queen Elizabeth Olympic Park. Best of all, Beth could extend her skills without distraction from her siblings. I sent back a big fat ‘yes please’. 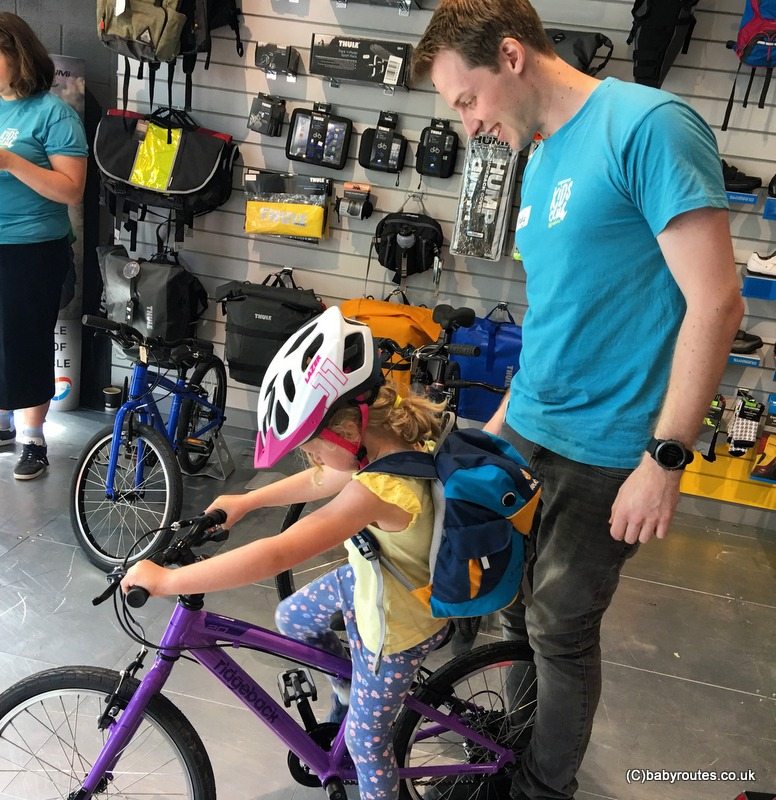 Roo getting kitted out with her first ever gear bike.

Ridgeback have been making making bikes for over thirty years, introducing a range of dedicated children’s bikes in 2003. They have built a reputation for quality and have started off hundreds of thousands of children on their two-wheeled journey to learning a skill for life. With the launch of the Ridgeback Kids Club they aim to create a community of cyclists-in-training, provide tips and advice for making learning to cycle a fun and safe experience, as well as some great offers and goodies!

The day of the Ridgeback Kids Club event dawned. Both girls were pretty excited as we arrived at Pave Velo bike shop in London where they were to be kitted out with helmets and bikes. 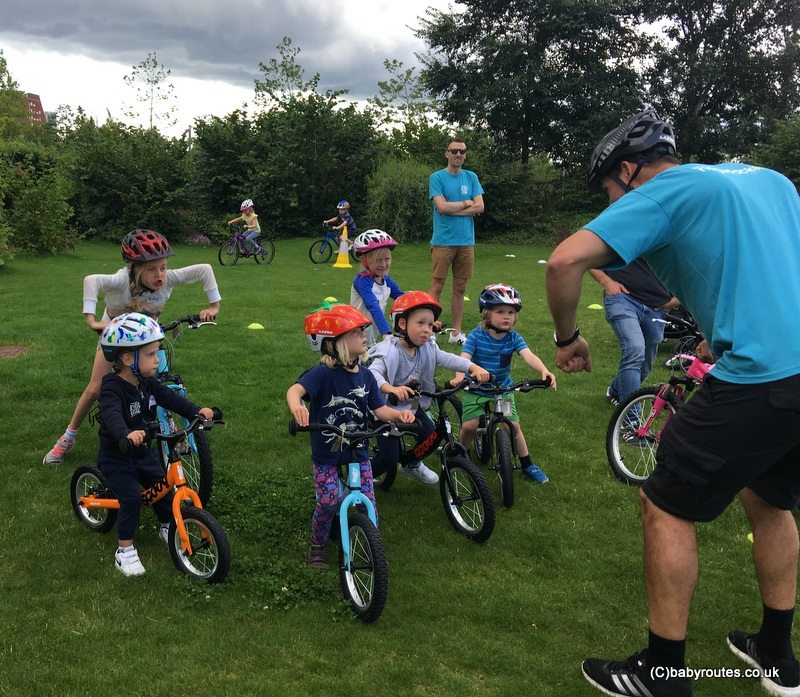 Beth raring to go alongside her new friends in the balance bike games!

The cycling session was run by Rob from The Bicycle Society, using games and challenges to teach and cement new skills. In addition to the tireless Rob, there were plenty of other Ridgeback reps in support, most of whom seemed to have young families themselves and a contagious enthusiasm for all things cycling.

For Roo there was great joy and pride as she wheeled out her first ever gear bike – a Ridgeback Dimension 20 swiftly named Speedy Purple. She soon got the hang of the size of it and was to be found whizzing under the bar in bike limbo, gleeful that being amongst the youngest and shortest in her group had at least some advantages! 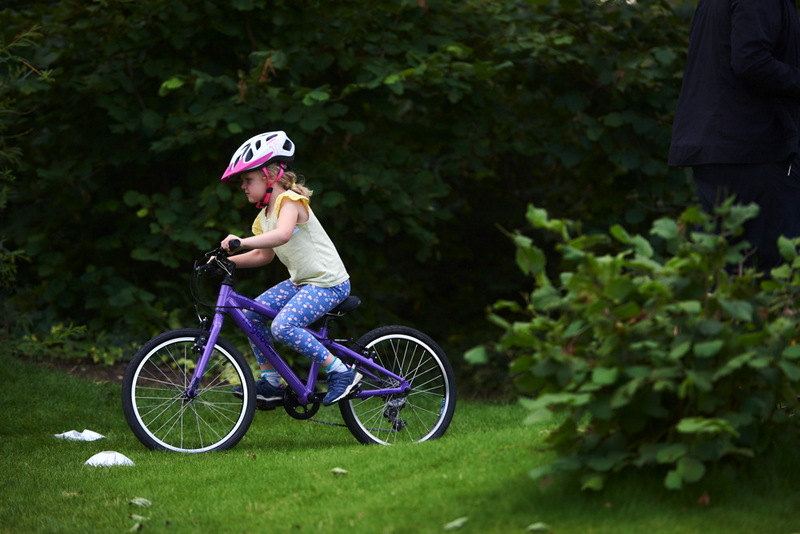 Roo getting to grips with gears and grass.

Beth, clad in her new strawberry helmet, would have to wait a little longer. She was given a balance bike for the skills sessions, with a promise of a go on the long-dreamed-of big girl bike later. She positioned herself at the front of her group, determined to prove herself as she put her balance bike through its paces playing traffic lights, pretending to move like different animals, lifting her legs up to bike through the ‘water’ and maneuvering round obstacles.

After lunch the big moment finally arrived. Under the wing of the super-patient Andy, her balance bike was exchanged for a Ridgeback Honey pedal bike, its optional stabilisers removed. 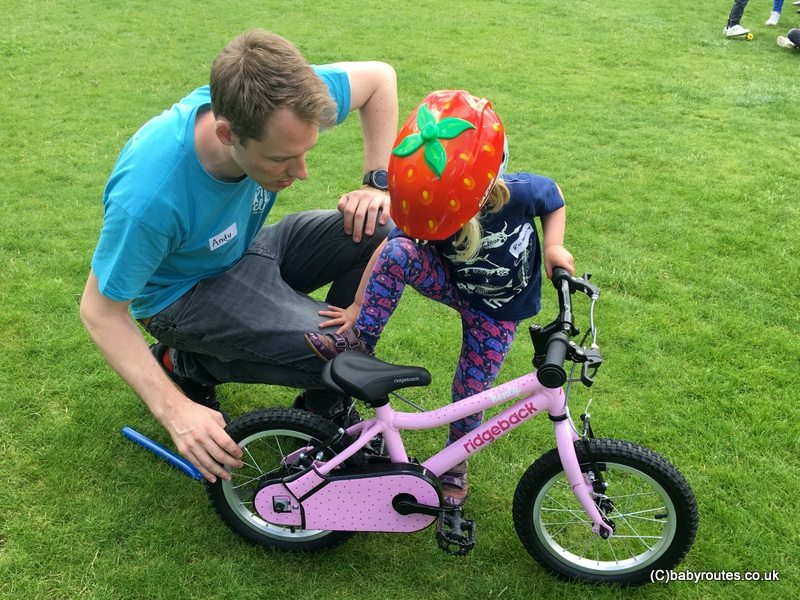 Finally! Beth clambering on to her new steed under the guidance of Andy from Ridgeback.

Riding a bike with stabilisers is a very different experience to riding on two wheels unsupported and it’s a route we’ve decided against in our family. The theory goes that the transition from stabilisers can be very unnerving for some children and make learning to cycle independently a drawn-out process. A balance bike teaches children the same skills they will need to cycle unaided  – how to distribute their weight properly and maintain their balance. It’s more a case of extending their skills when they make the transition rather than having to relearn them. It’s a personal choice but we’ve had great success with balance bikes with Roo and Beth.

At first Beth practiced getting used to the weight and size of her new bike with the pedals removed. The handy thing about the Honey model is that it comes with twist-on pedals (though you sometimes need a spanner to release them again), making it fairly simple to switch between balance and pedal bike modes.

By the end of the session Beth had had a few goes pedaling. She even managed to get them going in the right direction – definitely progress! 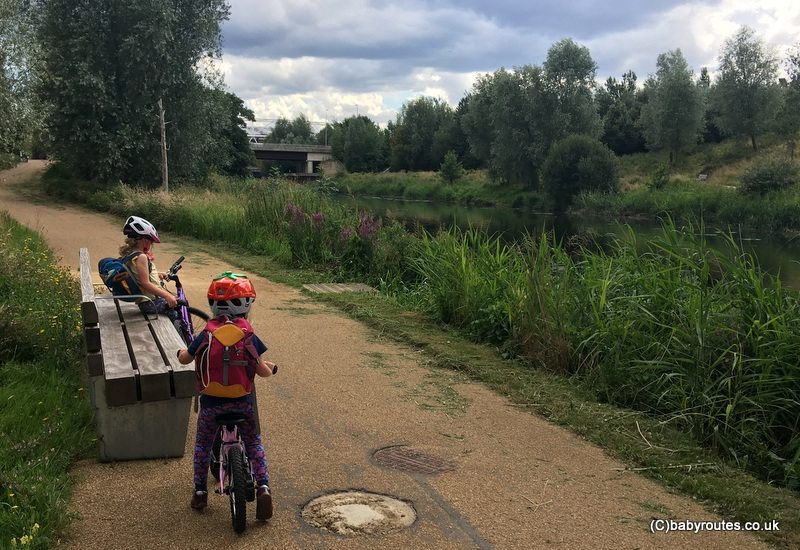 To their utter delight, the girls were gifted Purple Speedy and the newly named Pink Spotty to continue perfecting their skills. Reluctant to leave their saddles, we set off to explore the Queen Elizabeth Olympic Park which, with its paved paths, frequent benches and playground stops, is a perfect place for beginner cyclists. It’s no surprise that both of them zonked out as soon as they got in the car home, clutching their helmets and Ridgeback Kids Club goody bags. Never, it seems, has a high vis vest been quite so exciting!

As soon as the keys left the ignition back at home they were quick to rouse and lost no time in demanding to get back on their bikes again, setting the tone for what turned out to be a cycle-orientated two weeks and some serious boot camp for their mother!

Down in the West Country Beth got to grips with balancing confidently on Pink Speedy on the Strawberry Line just south of Bristol. The Strawberry Line is a perfect place for learning to bike – it’s a disused railway line given over to cyclists, walkers and, on some stretches, horses, with long off-road sections. Soon she was speeding along and able to pick both feet up off the ground for many seconds in a row. 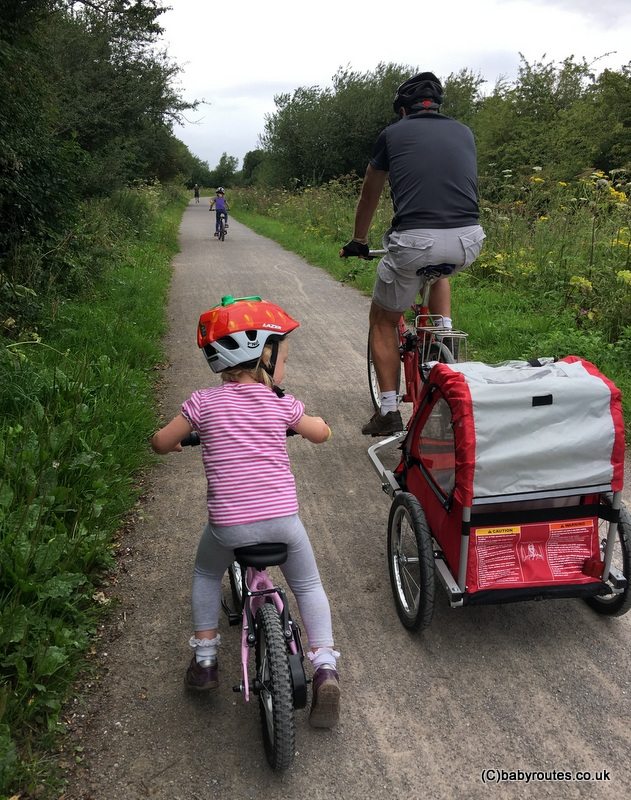 Beth finding her balance whist exploring the Strawberry Line with her baby brother safely contained for once! Roo is that rapidly disappearing purple blob in the distance…

The following week the pedals went on for a two hour circuit of the lakes of Dinton Pastures near Reading with lots of lovely breaks and the ultimate goal of reaching the amazing playground and ice-cream stall at the end.

After an initial go pedaling Beth would have happily reverted to the speedier option of balance biking so she could keep up with her sister. Unfortunately though I had ‘accidentally’ left the spanner at home for removing her pedals which seemed to have inexplicably (ahem…)  seized up. It was a choice of assisted pedaling or walk with me and her baby brother on his trike whilst her sister cycled…no prizes for guessing what she went for!

At first Beth made very slow progress. She seemed to have lost her ability to steer and spent more time staring at her revolving feet than where she was going, causing her to veer violently all over the path. I began to doubt if she was really ready. 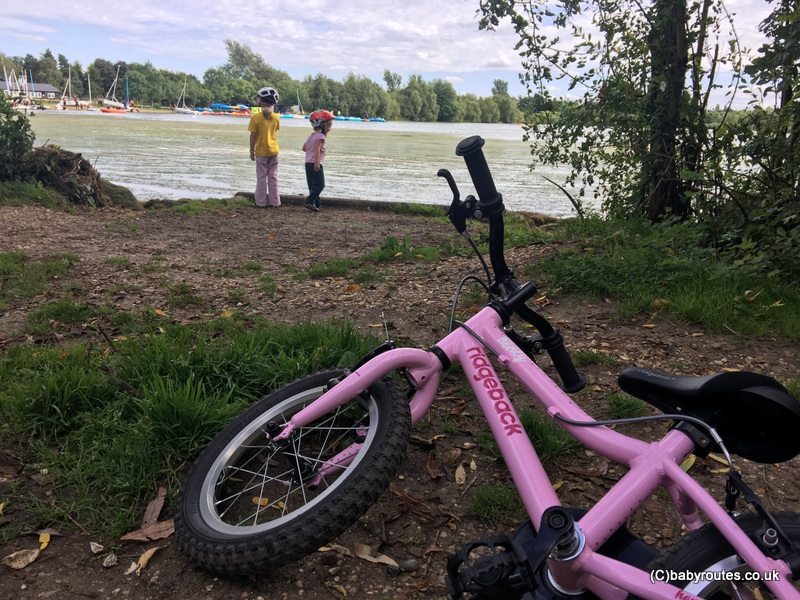 Taking a break from learning to cycle to watch the ducks and boats at Dinton Pastures.

As soon as she mastered keeping her head upright and I remembered about supporting her by her upper arms rather than the saddle, things changed quickly.  She was back in control, her balance was firmly centered and she had room to focus on keeping the pedals going. And going. And going! Now it was down to me to keep up with her as she still needed the reassurance of touch even though she was now pretty much entirely under her own steam.

For her support team this made for back-breaking, lung-busting work. Eventually I had to take a breather..

It was at this point the miracle occurred. After getting off her bike and peering at my beetroot face in a concerned way from under her strawberry helmet, Beth calmly announced,

As I held the bike steady, she climbed back on Pink Spotty once more and peddled several wobbly meters without so much as a backwards glance! 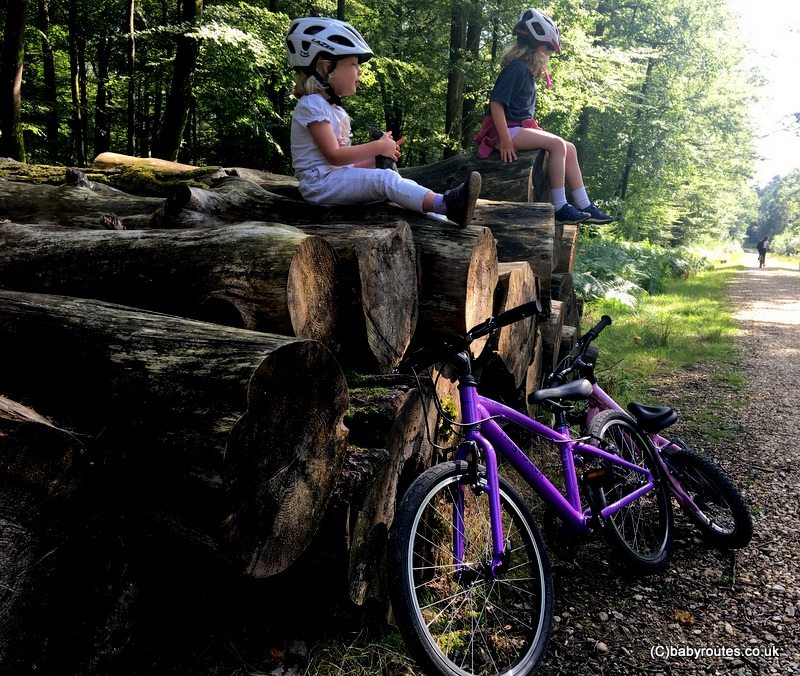 Taking a well earned break in the New Forest.

The following day we took a trip to the New Forest and took another two hour walk/cycle on lovely long woodland paths around Blackwater Arboretum. This was enough to consolidate those first few tentative unaided meters by bike.

By the end of the walk  – the culmination of a mere two weeks and four biking sessions since she first got on Pink Spotty, Beth was officially cycling with the biggest grin plastered on her face. 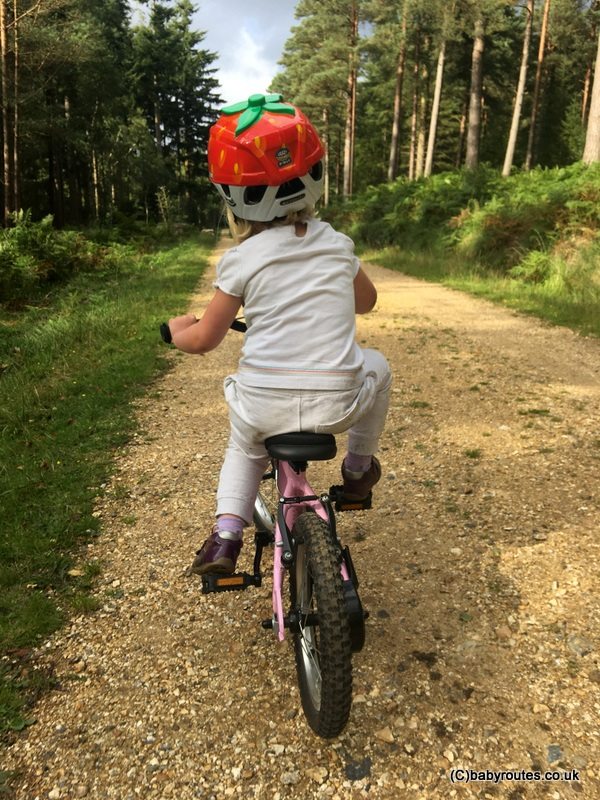 A big thank you to Ridgeback, Pave Velo and the Bicycle Society. Beth’s summer goal now has a big tick next to it and there is no stopping her.

I know though that these few weeks go well beyond a mere holiday ambition. Roll on a lifetime of adventuring by bike.

You can find more information on Ridgeback bikes and sign up to the Ridgeback Kids Club for  tips, advice, discounts and great special offers on their website here.

Readers should be aware that I was kindly given bikes, helmets and Kids Club goodies by Ridgeback as part of this event. All opinions, writing and aching backs from running after a wobbly but determined learner cyclist however remain, as always, entirely my own.

Permanent link to this article: https://babyroutes.co.uk/learning-to-cycle-with-ridgeback-kids-club/ 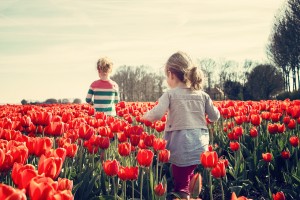 Walks in The Netherlands 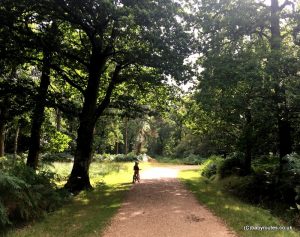 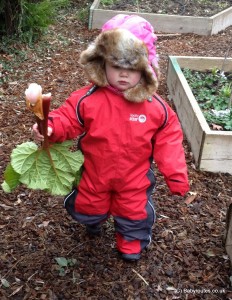