Design a Welly Competion with Joules 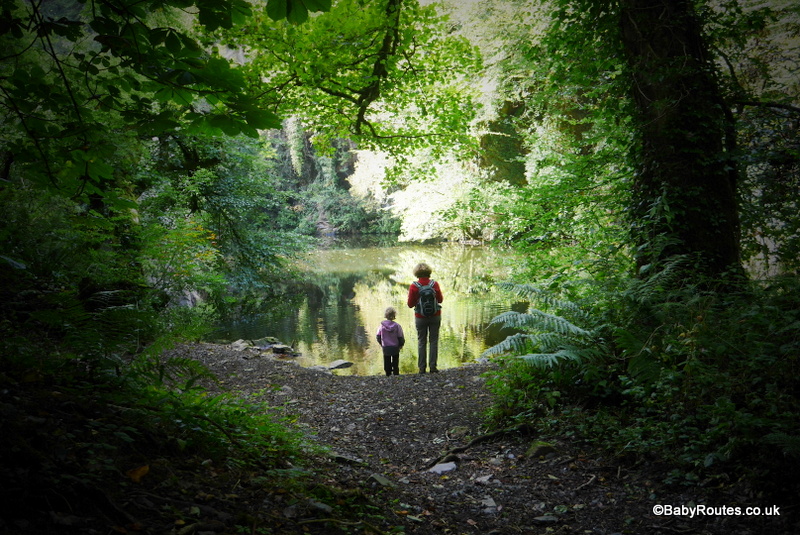 It was full moon during our stay at Wolfscastle Hotel in Pembrokeshire. As the girls slumbered peacefully, I found myself drawn to the view from our hotel window. High up on the hillside, silhouetted in the pale, yellow wash of moonlight, I fully expected to see werewolves or faeries fleet over the summit of the bizarrely shaped Treffgarne Rocks. They called to me and In the morning, well-fuelled by an excellent breakfast, my feet would obey their summons. 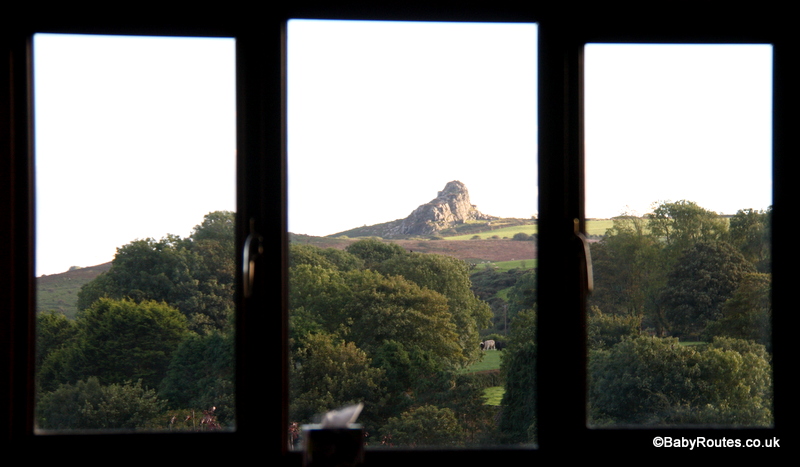 The tempting view from our room.

If magic still exists then it must surely be concealed amongst northern Pembrokeshire’s wild countryside. As other visitors dash straight through on the main roads to enjoy the region’s famed beaches and charming coastal walking, those who give in to the lure of a tempting tiny lane are in for a pleasant surprise. Inland Pembrokeshire is a landscape of peace and solitude, of sweeping views and rugged farmland. Yet bloody history, goose-bump inducing folk tales and mysterious ancient settlements come knocking at your imagination at every glance. It would take a hard-hearted person to not feel any connection to wilder times gone by in such a landscape. 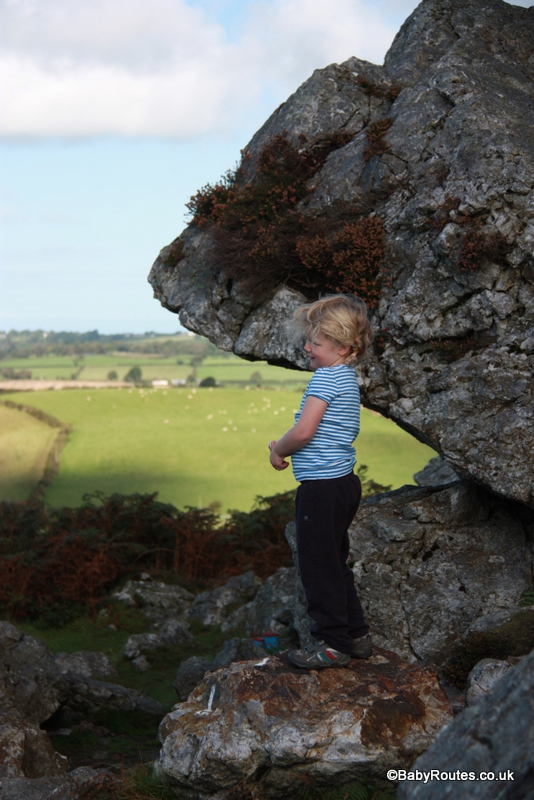 Enjoying the views and some rock scrambling at Treffgarne Rocks.

Wolf’s Castle itself is located just off the A40  – the main road between Haverfordwest and Fishguard. As well as a name that has you pulling out your notebook to pen the next children’s best seller, Wolf’s Castle also has a long and fascinating history. The village is home to, and takes its name from, a Norman motte and bailey castle, the obvious earthworks of which make a pleasant stroll and spot for a picnic from the hotel. Despite its idyllic and peaceful surroundings today, the castle was sighted at the confluence of the Western Cleddau and Anghof rivers – a good strategic point for defense at a time when the Normans were keen to protect their south Pembrokeshire heartland. It is thought that an iron-age fort may well have pre-dated the castle and that this may well be the last resting place of Owain Glydwr,  leader of a major Welsh uprising in 1400 – something that ought to fuel the imaginations of the children as they play knights, raiders or princesses on the grassy mound that remains today.

The motte and bailey castle at Wolf’s Castle is overshadowed by an even more compelling local landmark. Looming high on the skyline above the village and circled by ever watchful ravens seemingly straight out of Welsh folklore, is the unmistakable craggy outline of the Treffgarne Rocks. Such rocky outcrops are a common feature of Pembrokeshire’s highland areas and are part of what makes this region of Wales such a fantastic place for family walking. Many are easily accessible and offer wonderful views. 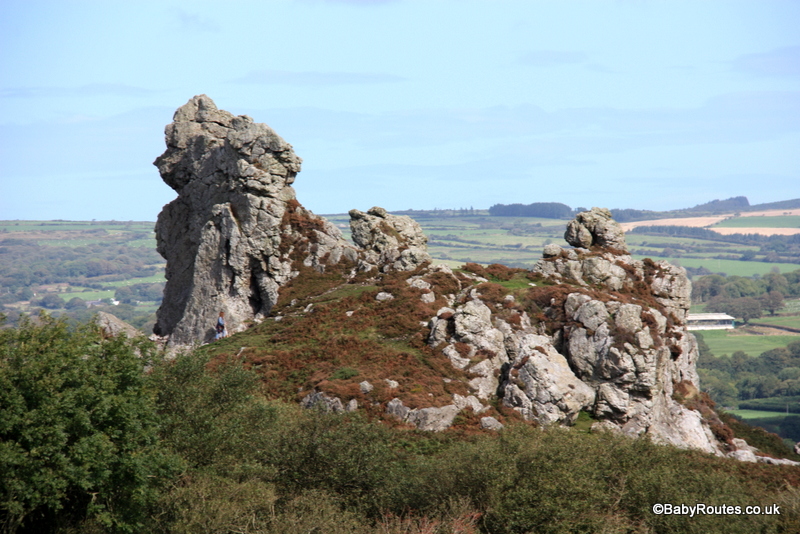 The Lion or is it a wolf, howling at the moon? We couldn’t decide.

With local names such as ‘The Lion and The Unicorn’, ‘The Teddy Bear’ and ‘The Wolf’ and an iron age hill fort thrown in for good measure, it would be hard to find a more compelling outcrop than Treffgarne Rocks to explore. Mini-adventurers undertaking the short walk up to explore closer will be rewarded with tremendous views for very little effort. The scrambling opportunities they present are an added bonus as is the ice-cream at the 14th century Nan – y Col Mill at the bottom of the hill! 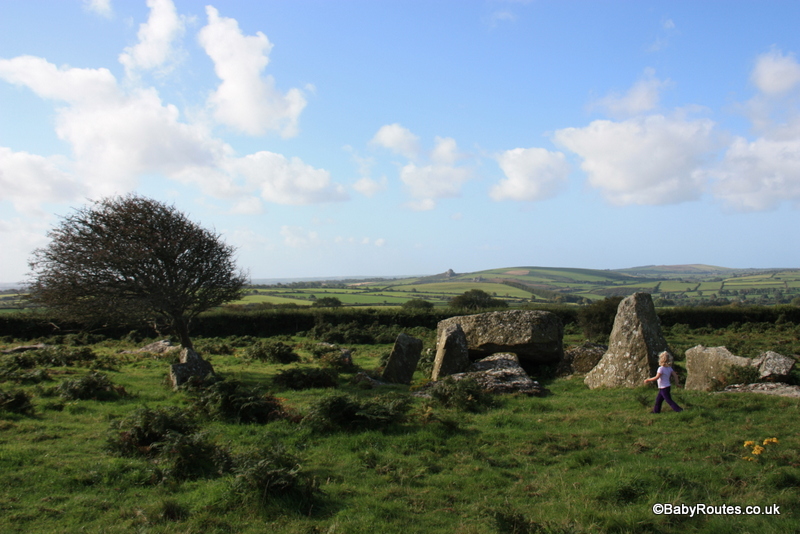 Garn Turne with Treffgarne Rocks clearly visible on the horizon.

Treffgarne Rocks are watched over from another iron age site that sits hidden from the untrained eye on the opposite side of the valley. Garne Turne is hidden away behind a high hedgerow and a very well concealed gate and is home to yet more rocky outcrops and 360 degree views, albeit without quite the same height or drama as Treffgarne Rocks. The main draw is Garn Turne’s ancient burial chamber. It took us a few moments to identify it but once we had, it was unmistakable. Everything from the colossal capstone the deliberate shape of its entrance area, the carving on its stone, right down to the gnarled old tree leaning in the wind at its side conjures shades of druids and ancient people whose ways and rituals we still do not truly understand.  Away in the distance Treffgarne Rocks stand boldly like a beacon on the horizon. It is hard to imagine such a prominent landmark was lost on whoever it was that first constructed the burial chamber at Garn Turne. 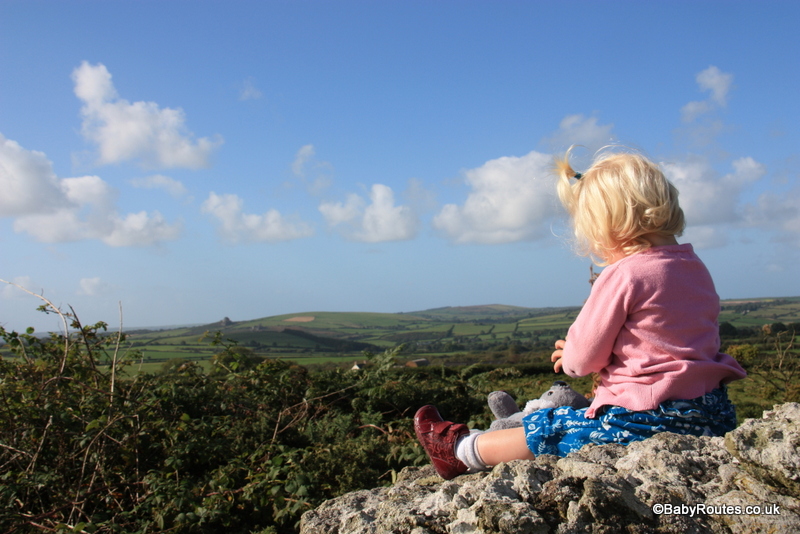 It amazed me that Garn Turne is so well concealed and is not preserved or promoted as a tourist destination, yet the truth is that there are many other places of equal interest dotting the landscape of inland Pembrokeshire. On a previous visit we headed to the impressive burial chamber at Pentre Ifan which can be found standing proud above more glorious views near the village of Nevern in NE Pembrokeshire. The sheer scale of the standing stones there is quite mind boggling when you think what it must have taken to get them into position. Yet more mind-boggling still is the fact that stones from the nearby Preseli Hills are thought to have been transported to build perhaps the most famous monument of them all – Stonehenge. Quite how that journey was made it still in the realm of the educated guess.

For tiny people on whom the history of the area may as yet be lost there are plenty of other tales to keep them interested as they explore this countryside on foot. Pentre Ifan for instance is said to be inhabited by fairies who dress up as little children soldiers. Closer to Wolf’s Castle, take a look for the small cave on the southern side of Great Treffgarne Mountain – it is rumoured that a dog once wandered into it and came out at St. David’s! 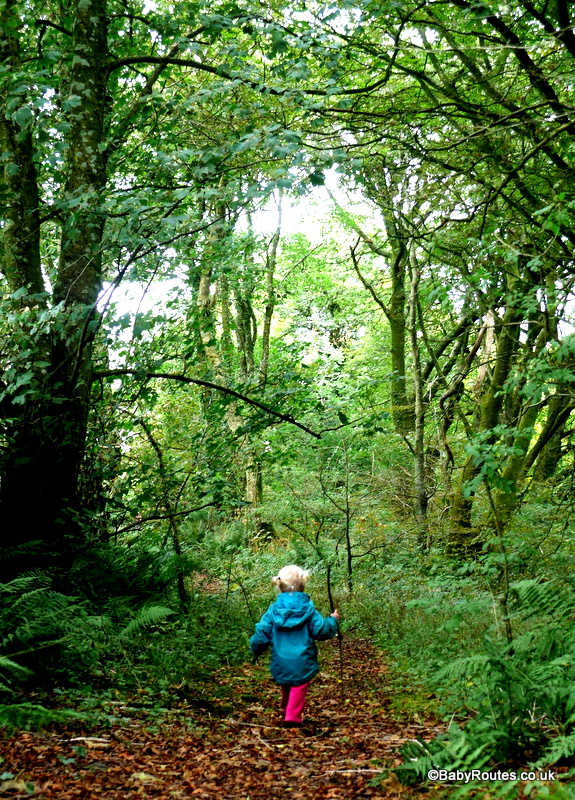 In pursuit of faeries in Sealyham Woods.

For making up tales of your own then head into the hidden woods of the Anghof Valley that lead down to Sealyham. In autumn the sun glances through the changing leaves as you crunch over beech nuts past a fascinating up-springing of toadstools fit for any imps or mischievous small folk. Continue on and you pass the pool formed by the flooding of old quarry works. Roo stood in quiet contemplation of the dancing reflections – a serious feat for an energetic girl of nearly 4 and who had spent the last twenty minutes galloping through the woods pretending to be a dog. The stillness and beauty of the pool must have cast its spell over her too -yet another spot ripe for stories of other-worldy creatures. 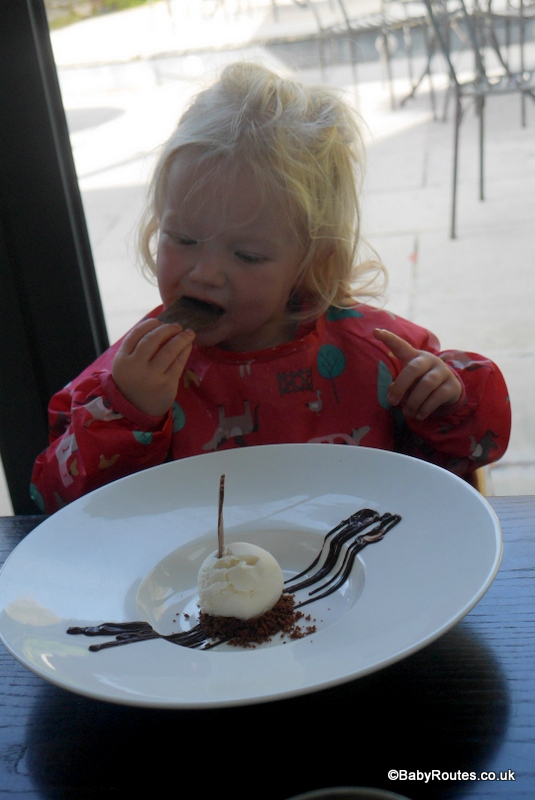 Back at Wolfscastle Country Hotel we were brought back to the real world with a delicious, hearty lunch. After the morning’s exertion’s the girls made quick work of their locally sourced meals although had the decency to linger over the beautifully presented ice-creams served for dessert. They would need all that energy for the next adventure that afternoon. Later that evening, Roo and Beth once more tucked up safely in their beds, I looked out once again onto Treffgarne Rocks. The moon was larger than ever, beaming off the black twisted form of a sleeping rock lion below. Was it my imagination or did it twitch an ear as I turned away to rest my weary feet?

I received complimentary bed and board at Wolfscastle Country Hotel for the purpose of review and exploring the local countryside. All words, opinions, moon-gazing and ramblings, verbal and physical, remain as always, entirely my own.

Permanent link to this article: https://babyroutes.co.uk/magic-mystery-exploring-wolfs-castle-inland-pembrokeshire/ 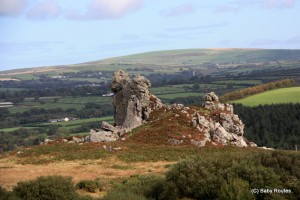 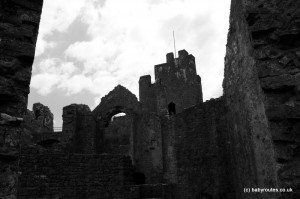