A few weeks back, I was invited by Funky Giraffe to review their bandana bibs for babies and toddlers. Always eager to try out products that could be useful for our walking trips or general out-and-about activities with Roo, I was happy to give them a go. Given that my baby is more of a toddler these days, I also thought it would be useful to test them on a younger model and so my friend, Mrs. C and her beautiful 5 1/2 month old daughter were enlisted to help us out. Here’s how we got on…

About Funky Giraffe & the Bandana Bibs

Despairing of her search to find stylish baby bibs for days out, fashion designer and new mum Yasmin set to work designing her own range of colourful bibs to smarten up babies eating out and so Funky Giraffe was born. With the aim of combining style with comfort and affordability, Funky Giraffe offers a vast range of fun and eye-catching designs for bibs and other baby clothing items with the aim of coordinating and enhancing a baby’s outfit.

Upon opening the promptly delivered parcel containing the two bandana bibs and the two extra large bandana bibs I had been sent to trial, this certainly held true. I had had great fun deliberating for ages over which designs to choose on the Funky Giraffe website and the bibs didn’t disappoint with initial impressions upon their arrival. They were vibrant and much more exciting in style terms than other bibs I had seen to date.

Made from 100% brushed cotton on one side and a cosy polyester fleece on the other, the bibs feel soft to the touch. The seam between the cotton and fleece has been made below the top neckline, preventing chafing and there is a handy little bit of extra material above the neck fastening level, which I found was great at preventing ‘yoghurt chin’ (you know, when you find baby’s dessert nestling in the folds of their neck hours later…) and also acting as a wind-stop for little throats.

The Funky Giraffe bandana bibs fasten with two poppers. I much prefer this design to velcro – for older and wiser babies with a habit of the Houdini about them, this makes it much harder for them to whip off their bib midway through their meal!

Roo is thankfully well past her days of terrible reflux when she had a bib around her neck for the most of the day and often on walks had a full blow muslin to help protect both her, me and the rucksack from her frequent milk regurgitation. The design of the bibs however is quite good for combating dribbling and wet, fluid foods. The brushed cotton is quite closely woven, working as a protective layer whilst the fleece backing helps to both soak up excess fluid and keep baby dry against the skin. We were only able to test out the bandana bib against yoghurt and drink spillages but it coped pretty well with no leaking to the back of the bib. 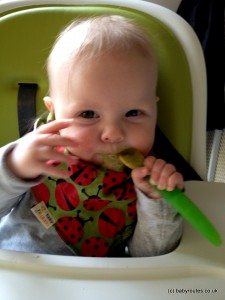 My main reservation about bandana bibs in general is that they do not cover up a baby entirely from messy food. For a long time now we have been using a thoroughly unattractive all-in-one plastic coverall bib with long sleeves which does the trick at home where looks don’t matter. It is hopeless for picnics outdoors though, meaning we either have to take Roo’s coat off (not ideal in cooler weather) or attempt to bundle it over the top which does not work at all. We had pretty much given up on bibs for picnics. The  Funky Giraffe bandana bibs however I found could be tucked under the coat whilst outdoors as an extra layer on the neck and then easily be slid over the top of the coat at picnic times, without the need to remove outer clothing layers at all. Given that our picnics rarely involve really messy items anyway, this is really handy! Their compact size also means stuffing a bib in a rucksack pocket for on the go is super-easy.

I also found surprisingly that even with indoor testing the bandana bib, particularly the larger design which is intended to cover the baby’s shoulders as well as their chest, was quite effective at catching drips from Roo’s spoon miscalculations. It’s downside however was that it is not able to intercept larger bits of food as pelican bibs do, which at 18 months is the main issue we tackle. I would recommend though that parents of older babies buy the XL size, as the regular bibs are just a little too small to be useful for toddlers.

‘I like the fact that the fastening is a popper and not Velcro – I find that the Velcro on my daughter’s other bibs wears out quickly and is soon so weak that she can just pull the bib off. The small size fits snugly round her neck now but it’s convenient to have the second popper fastening to use as she grows’.

Style is where the Funky Giraffe bibs come into their own. With around 250 different colours and designs for the standard bibs there is something for everyone. From plain colours to spots and stripes, pirates to butterflies and flowers, sheet music to designs inspired by the London Underground – you name it, it’s there. If it’s not then Funky Giraffe state on their website that they are always looking for new ideas, so send yours in and you never know…

After a long time pondering the different possibilities, I opted for bandana bibs with red polka dots, a pale blue stripe, a fun and vibrant ladybird design and a navy bib with a giraffe on it. All designs were bright and stylish and I was a particular fan of the red polka dots which coordinated brilliantly with Roo’s similarly designed coat and wellies. Some might call it overkill but for a polka dot fan like me it was brilliant!

The Funky Giraffe logo is present on a small label on the side of the bibs but is small enough and the giraffe logo cute enough to be inoffensive and unobtrusive.

“I love the look and style of the funky giraffe bibs – they are so smart that they are permanently in my daughter’s change bag so that we can use them whilst out and about to show then off!”

The Funky Giraffe bandana bibs are soft and compact when rolled, making them perfect to stuff in the side of a rucksack, handbag or lunchbox for ad hoc picnics or milk stops or as an emergency extra layer to fend off nippy breezes. They wash well at the advised temperature of 30 degrees but when I threw one of them in with a general wash at 40 degrees by mistake I did notice it had faded a little when it came out. The fleece however stayed bouncy and soft, unlike some competitor bibs.

“In terms of practical features, the bibs wash well (the underside stayed nice and fluffy and the colours remained bright). The only downside I can see applies to all bandana style bibs so is not a reflection on the funky giraffe brand. As she gets bigger, my daughter is going to get messier – especially once she fully takes charge of the spoon on her own! At that point I can tell I’m going to need to invest in full sleeve, full length bibs in order to properly protect her lovely outfits, until she learns some table manners!”

Funky Giraffe bandana bibs start from £4.00 for one with the extra large versions costing £4.50 for a single unit. The pricing structure however is designed to become economical the more bibs you buy. The cost of ten bibs for instance is £20.50, making each of the bandana bibs nearly half price the cost of a single unit. If like most parents, your baby gets through bibs faster than nappies, bulk buying is not so unrealistic or extravagant and you have the added bonus of being able to choose ten different designs!

Permanent link to this article: https://babyroutes.co.uk/review-funky-giraffe-bandana-bibs/ 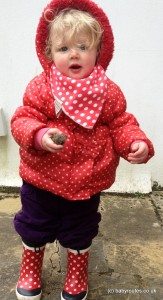 We have a winner…