Wildlife Wednesday: ‘S’ is for…

A month ago we headed out of the house with the usual assortment of hiking boots, baby carriers, water bottles and rain coats. Our destination for the day was just south of Swindon and our aim to continue our family challenge of walking the Ridgeway National Trail in family-friendly chunks.

We started walking the Ridgeway from Avebury back in April 2013 when Roo was just 16 months old. Our original aim was to walk the whole 140km over the course of that summer and autumn. Multiple ear-infections, repeated croup. weather unsuitable for toddlers and my own second pregnancy complications soon laughed that plan well out of the water.

Plus there are just too many other places to walk elsewhere too…committing to returning every weekend to where we last left-off without a change of scene didn’t seem like such an inviting plan after all. We had also started walking stretches of the Thames Path and were regularly walking across other areas of the UK – our walking time was split in many directions, quite literally. 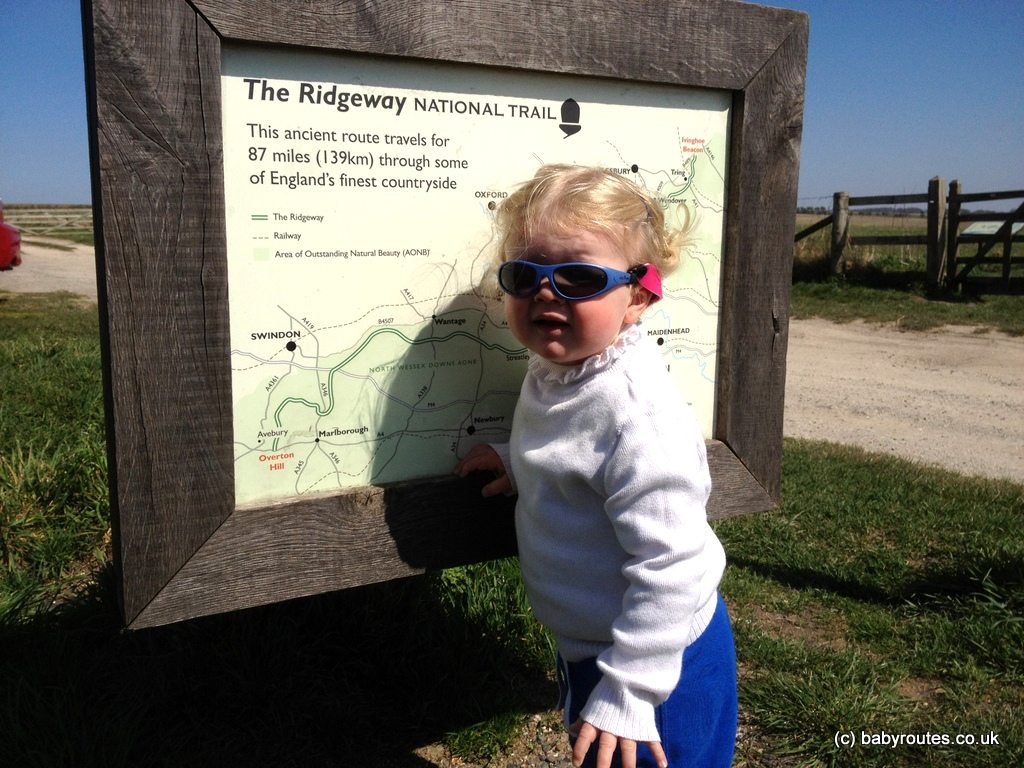 A very young Roo toddling off at the very start of our Ridgeway National Trail adventure.

Whilst still keen to complete the Ridgeway National Trail, we decided to take the time pressure off. There was no rush and given we were only ever completing a maximum walk of around 8km each time (and often half this distance actually on the Ridgeway as most of our walks are circular) our challenge was going to take a lot of return trips to complete.

By the time we reached Barbury Castle we had a new and very tiny addition joining our family walking party. Beth’s inaugural stretch on the trail was from Barbury Castle to Ogbourne St. George and I remember stopping to feed her on the trail whilst basking in glorious sunshine.  Walking with Roo was slow going at this point. She had got to the stage in toddler-hood of painfully slow dawdling. Every stick, flower and blade of grass required inspection. Her little legs were capable of walking but only in short, fast blasts after which she would need to rest. She had got too heavy to make carrying her in a sling easy anymore. Besides, with another little back-passenger and walking kit to carry for four of us, the rucksack space was already limited. We took a bit of a breather again and Roo got in lots of casual walking closer to home to help improve her stamina without her realising! The last thing we wanted was to make walking anything but fun and enjoyable for her.

The stretch round the Wiltshire village of Ogbourne St. George seemed to take forever. Walking around it in a horseshoe over the course of three or so walks, we felt as though we were never going to be released from its scenic clutches.  Every time we drove down to start a new walk though the M4 motorway seemed to get tantalisingly closer. We eagerly pointed out ‘the Swindon tree’ as we called it – the prominent tree on the hillside above the south side of the M4 motorway at Junction 15 just outside Swindon. We were fairly sure our route would take us past that very tree. We just didn’t know when.

Before setting off on our latest walk I agonised for hours over route options. We had been forced to finish the previous walk section a little earlier than planned as Roo had been flagging that day. This meant if we were to pick up exactly where we left off, we would be starting half-way along the main road between Ogbourne St. George and Chiseldon. There was no obvious bus stop nearby, the main road is really fast and unpleasant to walk along with small children and we didn’t really fancy another long stretch walking on the railway path. Neither did we fancy walking our route in reverse which the there-and-back again option from Chiseldon offered. 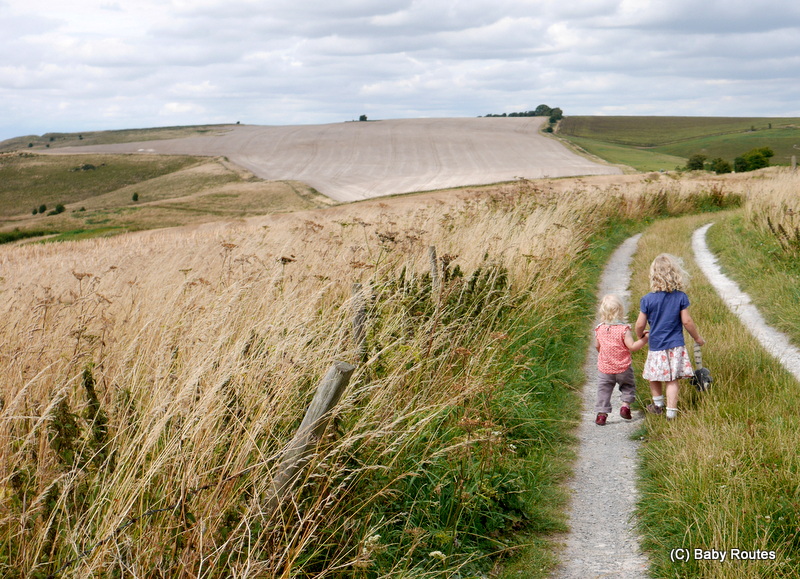 A much bigger Roo and Beth, finally out walking together on the Ridgeway.

What we really wanted was to reach Liddington Castle and then ideally continue across on the unglamorous road stretch of the Ridgeway to cross the motorway at last, ending in Foxhill. The trouble was, walking all that way in one direction would be almost 9km alone – too far to cover as a circular walk for little feet and impossible to link up to with buses given their routes and lack of operation on a Sunday!

In the end my husband came to the rescue. In a moment of insanity earlier this year he decided that taking part in a triathlon ironman would be a good idea. In case you aren’t in the know then this involves a sea swim of 3.8km, cycling 180km and running a marathon.

He has been flat out training (it’s this weekend!) and as part of this thought it would be a good idea to cycle to Swindon from Reading to meet us for our walk, all after a quick 3km swim in a lake first… Adding on  a quick cycle to fetch the car at the end of our walk didn’t seem to make a lot of difference to his already crazy activity planned for that Sunday. Suddenly our options were open again.

We met my husband (amazingly fresh-faced and smiling) for lunch at the Three Trees Farm Shop at Chiseldon. It’s within view of Liddington Castle, has a small toddler playground adjoining the outdoor seating and offers hearty lunches and a fantastically tempting farm shop full of goodies to take out on the trail with you. We then headed to the abandoned village of Snap, near Aldbourne from where we started our walk. We approached the Ridgeway from the east for a change, joining up with it exactly opposite from where we had made our descent at the end of the previous leg. Starting at Snap had cut off the hill climb up to the Ridgeway and Roo was fresh-legged for the onwards walk. It was all we could do to stop her sprinting. 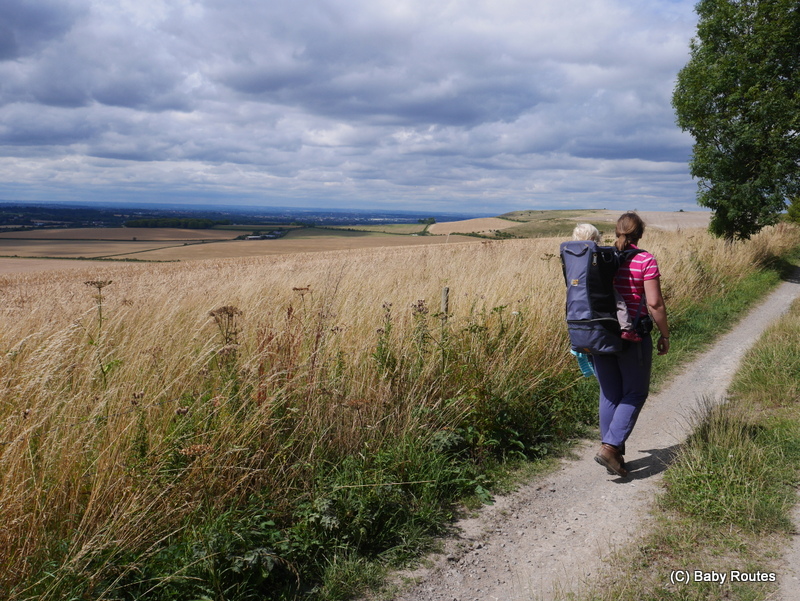 Even Beth got out and toddled for a while. It was slow going with her but she did really well on her tiny legs over the bumpy ground. I think having a big sister to follow only makes her more determined to do it herself.

This stretch of the Ridgeway was exhilarating. After the high view-screening hedges of the previous sections it was lovely to finally be out in the open with views falling away on all sides. The final approach to Liddington Castle felt as though we were on top of the world. Well, we were on top of the highest point in the borough of Swindon anyway and I have never seen that town from such a good angle before!

As we wandered back down from Liddington Castle’s trig point, we finally passed the Swindon Tree. It turns out it has a pill box behind it – who would have guessed! From reading up online, apparently this was a command point during WWII for an oil pit that was lit to simulate explosions, convincing waves of bombers heading from Swindon that the town was located at Liddington Castle instead. It seems that this site of Bronze Age fortifications has a rich history in defense through all its ages.

At the bottom of the hill we were relieved to find my husband’s bike where we had left it. Roo was still full of beans and it seemed a shame to sit still in the field and wait for him to come back for half an hour. Instead, we decided to plough onwards towards Foxhill, covering the road stretch of the Ridgeway I had not been looking forward to. Roo was excited by the prospect of walking over the motorway on a bridge though. Beth had gone to sleep in her carrier and didn’t have much to say about it other than the odd snore. My husband wasn’t missing out either – he had already cycled over this stretch of the route earlier. 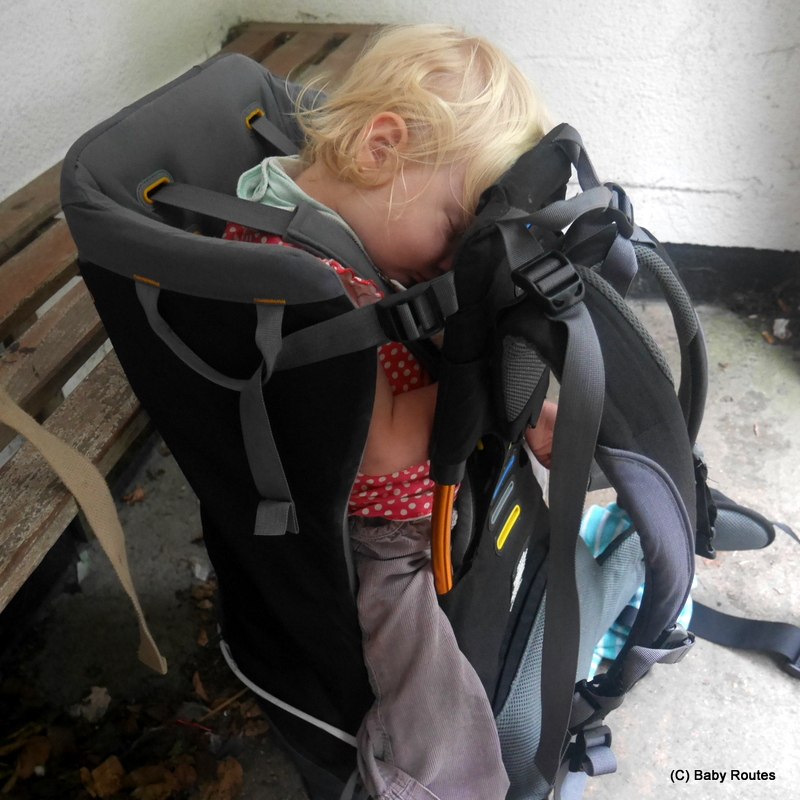 I would not recommend walking this final road section unless you really, really want to. It’s particularly unpleasant with young children. There is a path cut into the verge alongside the roadway but the road is very fast. At one point a stone thrown up by a passing car chipped my sunglasses. After that, I made Roo face the hedge every time a car passed us.

Going over the motorway bridge was fun for Roo and she was very well behaved and sensible. The stretch on to Foxhill afterwards though was more of the same – fast cars and an ever dwindling grass verge to walk on. We were glad to get to the bus shelter at Foxhill and to wait for my husband. The lovely people at The Burj indian restaurant there filled up our water bottle for us. It smelt amazing in there and they open from 5,30pm. I think our next walk will have to be circular and timed so we can end it with a curry! 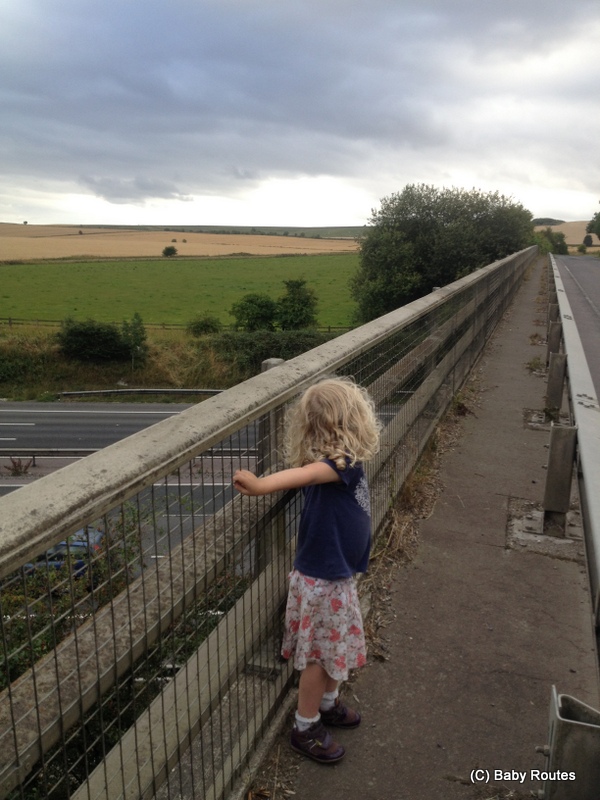 Crossing the M4 motorway at last!

I think we all felt a sense of achievement as we piled back into the car that day. Roo had covered nearly 9km of walking with barely more than a couple of meters of piggy back along the way and not a single moan. My husband had somehow managed to stay awake and moving despite the ridiculous amount of miles he had covered swimming, cycling and walking. For me, I was elated to have finally cross the M4 motorway and be heading closer to home.  For a while now it should be easier to nip out for a quick Ridgeway walk at weekends without quite such a long journey to get there and with Roo’s improved distance walking skills, we ought to cover more in one go.

Not that it matters that much though. It may have taken us over two years to walk a mere 25km of the Ridgeway National Trail but our slow pilgrimage continues. The walk has now become a kind of symbolic journey through the childhood of Roo and Beth, getting ever closer to the place they call home before eventually destined to turn their backs on it and walk every further away again. Every time we pick up a new section, we recall the girls’ ages, mannerisms and little anecdotes from the previous section. Every time we end a walk we wonder how long it will be and what will have changed by the time we pick up the route again. Who knows quite when our Ridgeway journey will end?

Permanent link to this article: https://babyroutes.co.uk/ridgeway-national-trail-heading-north/ 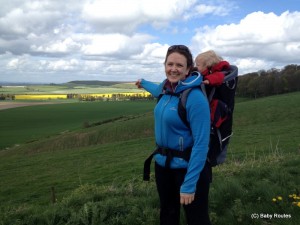 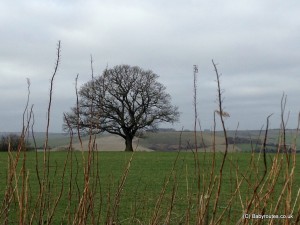