Design a Welly Competion with Joules

As we headed out for the afternoon in Santa Monica last week we passed the friendly lady in our local corner store. We exchanged a few pleasantries and she asked us where we were going.

”The Natural History Museum in Downtown LA.’ I told her.

‘By bus?’ she asked incredulously, taking in my bulging rucksack-come-child-carrier, the two tiny tots with sun hats firmly jammed down on their heads and our lack of car keys.

‘Well, bus and then the train.’ I clarified.

Never one to pass up good local knowledge I asked her whether her good wishes were due to safety concerns.

‘I wouldn’t know, I have never been on the train’ She gave me an odd glance. ‘Do you do this kind of thing a lot in your country?’

Her reaction was by no means unusual. Even at my husband’s office only one person admitted to having used the train and people talked warily about buses. Every book, person or website I had consulted before flying to California told me that a car would be essential. I was told LA was too big and public transport was nearly non-existent and in places pretty suspect.

We picked up one hire car from Hertz at LA airport on arrival. It was a beast of a thing and took over an hour to sort out but at least it got all our luggage in. We spent the weekend exploring and getting used to LA’s crazy traffic – driving to the Getty Centre, Malibu and using our humongous wagon to cart back our equally humongous haul of sun-ripe tomatoes, bunches of fresh asparagus and a sack of aromatic oranges from the local farmer’s market in Santa Monica.

On Monday my husband set off to tackle the commute to Downtown LA and our set of wheels went with him. The plan was for me to hire a second car so the girls and I could explore whilst he was at work but it seemed pointless on that first day. We were still working off our jetlag and a wander to the beach was probably as much as we would manage. 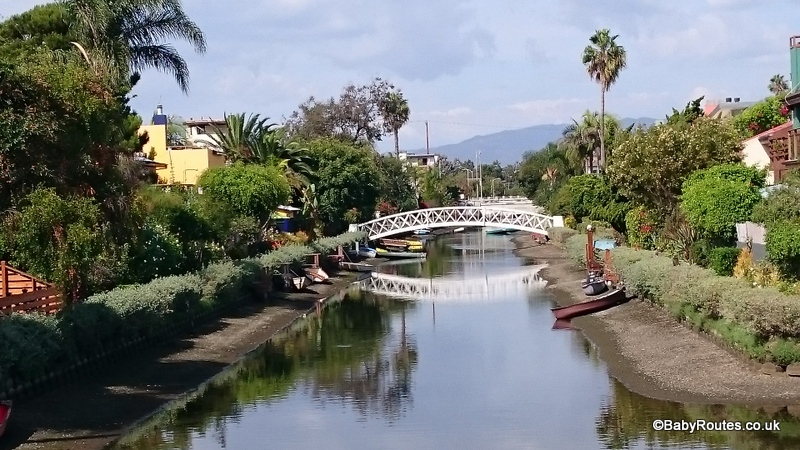 Unfortunately my chronic bear-went-over-the-mountain-itis struck again. Our little ‘beach wander’ ended up taking us on a 2.5 mile trek from Santa Monica to Venice Beach Boardwalk and round the Venice Canals, taking in several beach and playground stops along the way. They have swings that close over your head here and slides made out of rolling bars ‘just like on the luggage ramps from the plane’  as ever eagle-eyed Roo observed. How could we resist?

By the time we had had enough of exploring the sun was beating down fiercely and there was no way Roo was going to enjoy the return walk. I considered calling Uber for a cab but then remembered we would need proper child seats. I consulted that beacon of knowledge, Google Maps. The only remaining way to Santa Monica  was by bus. I decided to give it a go. 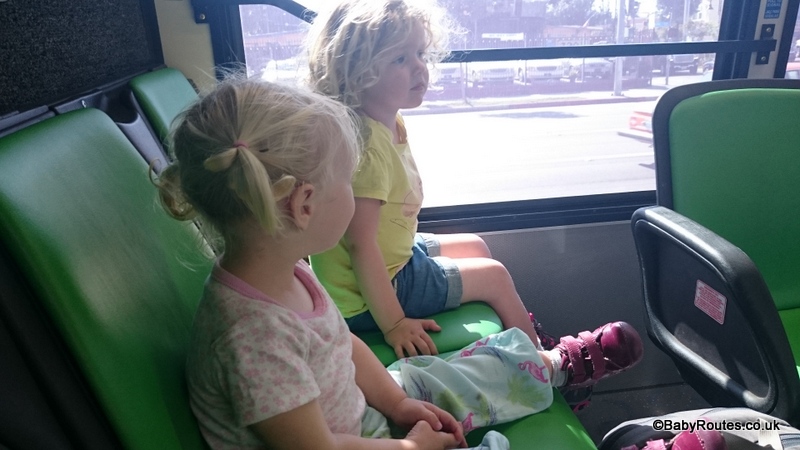 Our bus was clean, modern, spacious and deliciously cool. It took us under ten minutes to get back to the end of our street and the whole experience was incredibly pleasant and stress free. Best of all, it only cost a dollar to ride and as they are under five, the kids travelled free. I picked up the Santa Monica Big Blue Bus network map on the way out.

For the rest of that week we travelled everywhere by Big Blue Bus. We used it for heading into the centre of Santa Monica, for sunset trips to Santa Monica pier and beach, down to see the boats and sea-lions at Marina del Rey and for trips along the coast and even up to Tamescal Gateway Park from where we climbed the Tamescal Ridge Trail for some amazing views over LA. We had planned on using it to get to the Swim Centre in Santa Monica too but ran out of days! If we had known (and the bus had had enough space) we could have even used it to travel from LA airport, making use of its rapid service.

Paddlin at sunset on the beach at Santa Monica. Another stop-off on our bus adventures!

The bus took us longer than driving but the girls couldn’t cope with more than one big outing a day anyway and we saved ourselves a small fortune on car rental and car park fees (expect to pay around $10 and up for popular places).  The bonus was that the girls found riding on the bus super-exciting which stopped them from zonking out at a time when beating jet lag was a key goal. Beth kept up a never ending stream of recently acquired ‘hello’s to anyone who glanced her way and Roo was baffled by the continual comments on her resemblance to Santa Monica golden girl Shirley Temple. Who’d have thought? I can’t say I missed driving in LA traffic and I felt vaguely virtuous to not be adding much to the city’s vehicle emissions for the week. 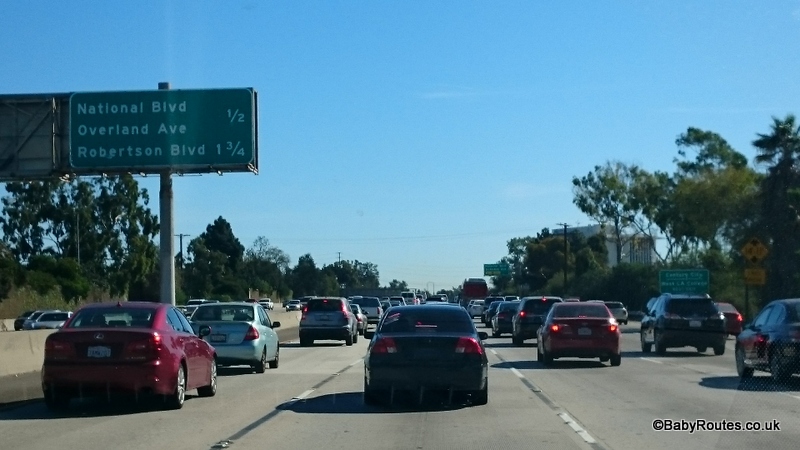 Our experience was largely positive. Buses ran every 15-20 minutes and on the whole were pretty empty. We did have to stand on the bus once but could have chosen to wait a few minutes for the bus behind. We only one bad Big Blue Bus experience where we had to wait 30 minutes for a bus as the one before it was full. Generally though, we never used a timetable and still on average only ever waited about 5-10 minutes for a Big Blue Bus to arrive.

When we weren’t catching the bus we walked and Beth hitched a ride in our brilliant LittleLife Ultralite carrier. We ambled past vegan cafes and boutique fashion stores, sneaked a peak in at the glamorous ladies having their manicures and pedicures in the beauticians, tested out every park we found and drank in every palm tree along Santa Monica’s endless golden sands. We quickly got our bearings and chatted to locals, tuning in a lot faster to the area than we  might have done travelling by car. 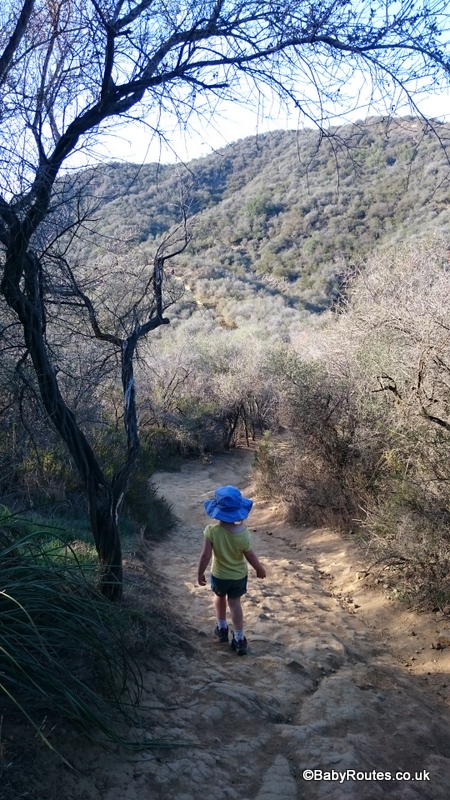 By the end of the week in Santa Monica we were ready to spread our wings a bit further and head into Downtown LA. Whilst we could have got the bus all the way, it was fastest to take the Expo Line light rail from Culver City instead. We duly hopped onto a Big Blue Bus, changed for a Metro bus service at Venice  (a whole $1.75 for that service – outrageous!) and then hopped onto the train direct to Exposition Park – home of the Natural History Museum and Science Centre in Downtown LA. The journey from Santa Monica took us an hour and was hassle free other than Beth squirming on my lap. Our only fellow passenger for most of the way was a lovely lady who opened up conversation by asking if we knew that Roo looked just like… Next year the Expo Line is due to open up right down to Santa Monica centre, opening up car-free travel across LA. 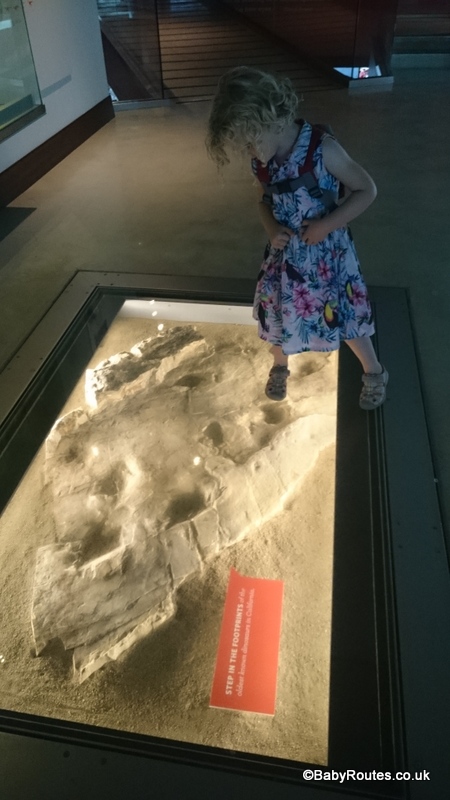 Treading in dinosaur footprints at the Natural History Museum in Downtown LA.

By Saturday we had our wheels back again. It was nice to be able to drive out to the Angeles State Forest north of LA in just an hour and not to worry about trying to stuff all our hiking gear into just one bag. As I finally got behind the wheel a week later to drive a few hours along the Pacific Highway, past Manhattan Beach, Redonda, Long Beach and on to our next stop Dana Point, I was glad that I’d got to know Santa Monica by foot and Big Blue Bus. In that little corner of California at least, a car is not always necessary for a fantastic family adventure.

Permanent link to this article: https://babyroutes.co.uk/santa-monica-without-car-bus-los-angeles-la-california/ 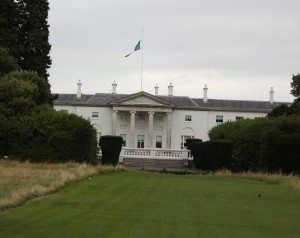 8 Top Tips for Visiting Dublin on a Budget! 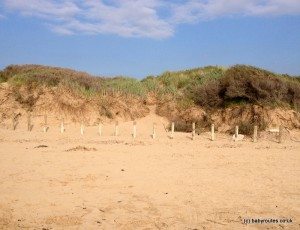 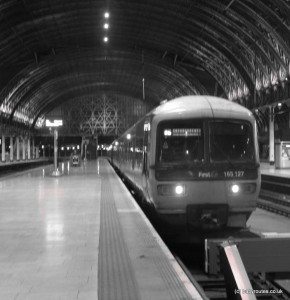