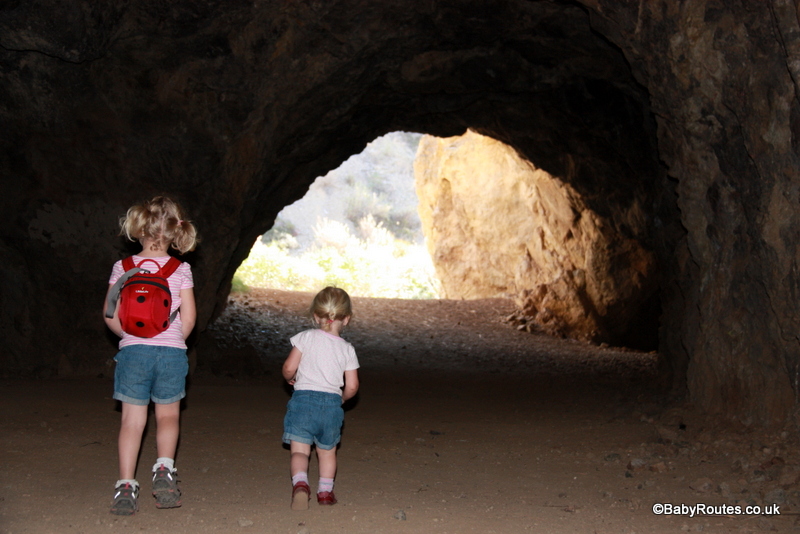 Walk Distance: 1km there and back

Walk Duration: 20 mins at toddler pace but you’ll need closer to 50 mins if you want to let the kids explore and play in the caves and to a take in the scenery.

Map: This is such a short walk that so long as you stick on the trail you’d be pretty clever to get lost!

Suitable for: Babies in carriers and buggies (dust track), toddlers, little walkers, Batman fans and all the family. 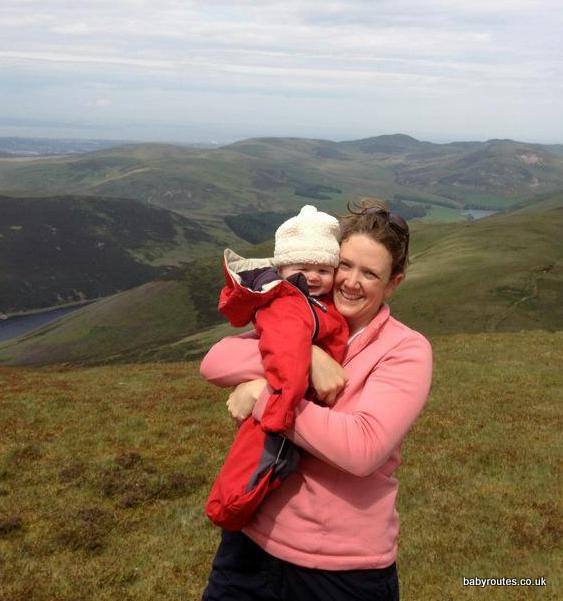 ‘The Bronson Caves Batman Walk is not so much a hiking adventure as a short there and back again stroll, making it perfect for families looking for a short outdoor adventure with a Hollywood twist.

The Bronson Caves are artificially made and a popular filming location. They are most famous as the Batcave in the famous 1960s TV series of Batman.

Even the most reluctant little walkers ought to be able to make it as far as the caves and when they do, it’s unlikely few children can resist exploring the dark tunnels carved into the rock-face. Even for those too young to know much about Batman, this is the perfect place for playing at going on a bear hunt as Roo & Beth did! Just scout it out with some loud stamping first – I would imagine that the odd rattlesnake would find the Bronson Caves an equally inviting hidey-hole!

Don’t forget to step out the back for a good view of the Hollywood sign and leave time for the small playground back by the start of the walk.‘

The Bronson Caves Batman Walk starts from the car park (parking lot!) at the far end of Canyon Drive in Bronson Canyon. The trail starts between the two car parks. If there’s space then it’s probably easier to park in the the one at the very furthest point of the road, although if you’re planning on spending time on the playground on your return the other is better. 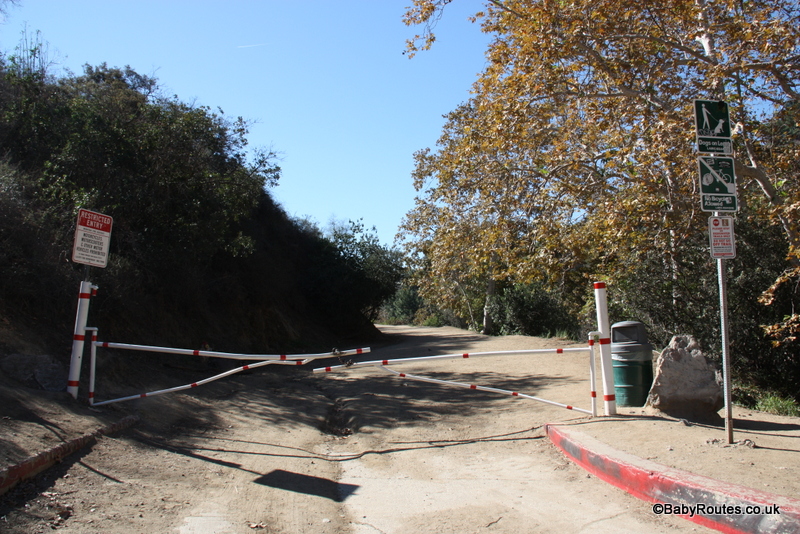 The start of the Bronson Caves Batman Walk.

From the furthest car park turn your back to the end of the road and the start of the main hiking trail up into Griffith Park and follow back down towards the overflow car-park right down the road.

This is pretty much the trail…the Bronson Caves are round the corner at the top of this picture.

A short way on you will see a trail leaving the road on the opposite side up to the left. It is normally barricaded off to vehicles, although if it’s open, who knows, maybe there’s filming going on! 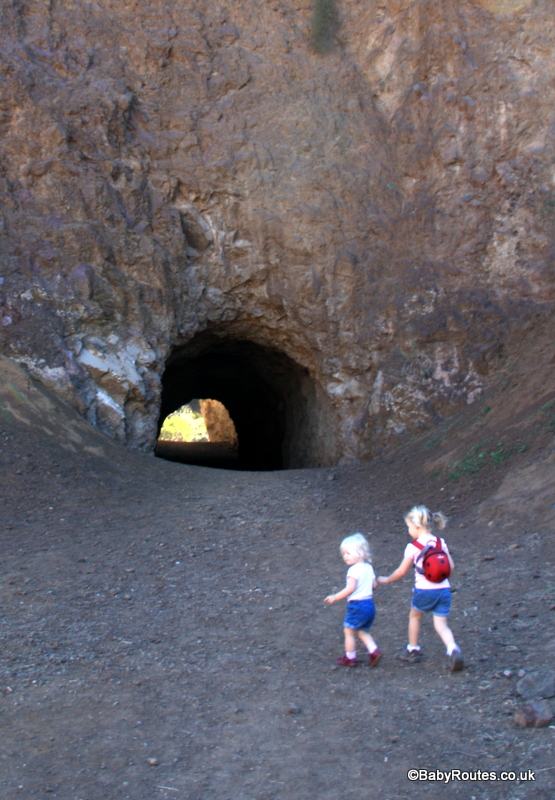 Approaching the front of the Bronson Caves.

Follow up the dust trail until it bends round to the left. Beyond the Bronson Caves are unmistakably before you.

The tunnels are only short with the main tunnel splitting into three tunnels towards the back of the rock, one of them small enough for little folk to clamber through on their own adventure. 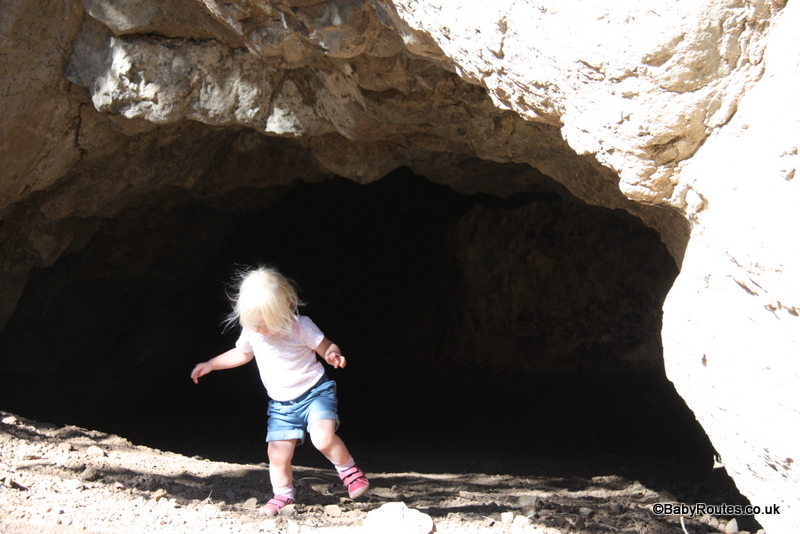 Outside the back of the caves don’t forget to stop and take a look at the Hollywood sign – there’s a good view from here on a clear day that’s hidden from view from the front of the caves. 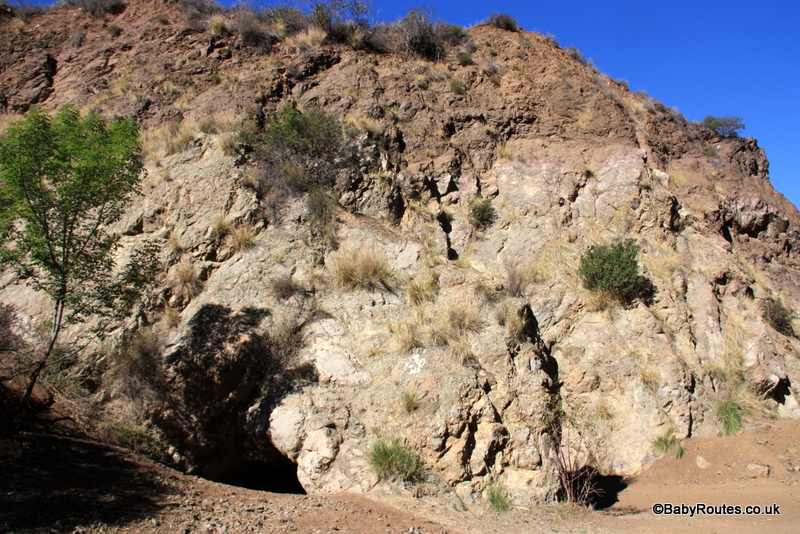 The view from the back of the Bronson Caves.

Finish the walk when you’re ready by retracing your steps back to the car parks and playground.

There are two car parks located at the far end of Canyon Drive. This is a popular hiking starting spot though so visit early or midweek to avoid waiting for a spot.

Permanent link to this article: https://babyroutes.co.uk/walking-routes/international-walks/walks-hikes-usa/california-walks-hikes/bronson-caves-batman-walk/