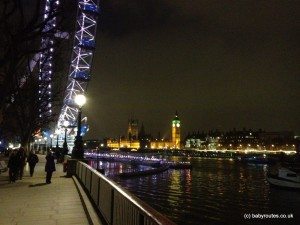 Suitable for:  Pushchairs, all the family.

Lined with historical and cultural gems and some of London’s most famous landmarks, this unmissable London walk along the South Bank of the Thames is wide, flat and well paved so you can walk along the Thames Path National Trail with a pushchair or family of any age. For a magical twist in winter, make the most of the short days, pack a snack and set off on this enchanting walk at about 1600. London ‘s famous landscape gloriously illuminated will make pushing back baby’s bed time half an hour completely worth it. The following route describes this pushchair friendly walk – if you don’t have a pushchair, feel free to just follow the river and negotiate the steps for a marginally shorter walk.

The Tower Bridge – Westminster walk begins on the south side of the Thames at Tower Bridge. For step-free access from London Bridge for a pushchair, see ‘Directions’. 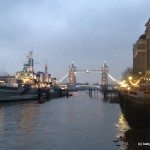 Before you set off on the walk, drink in the magnificent views of Tower Bridge, Tower of London and London ‘s City. Then, turning your back to Tower Bridge, join Queen’s Walk, passing City Hall, home of London ‘s mayor, on your left. Children will gravitate towards the impressive HMS Belfast on the right, the Royal Navy’s largest Second World War cruiser. For some impressive photos with HMS Belfast and the Tower of London together, walk on a little further beyond the ship to a view-point and seating area.

Continue on Queen’s Walk before turning left down a small alley by some black railings as the path narrows. If you get to the steps and are doing the pushchair walk you have gone too far (& found the reason for the detour) –  turn round and you will find the alley by the black railings on the first right.

Southwark Cathedral and the Shard

At the junction with Tooley Street, turn right and under London Bridge. You will pass Southwark Cathedral on your left. Look up to see a perfect example of old London blending into new as the Shard towers over the spire of Southwark Cathedral. There has been a church on this spot since AD 606 and evidence of pagan worship prior to that and Southwark Cathedral is the oldest cathedral building in London – well worth exploring its history further if you have time.

Turn left, following round Southwark Cathedral and then turn right down the pedestrian walkway signposted to South Bank and the Golden Hinde. Upon reaching the boat in question you will find a smaller and older but equally prestigious vessel as HMS Belfast. It was in this ship in 1580 that Sir Francis Drake became the first Englishman to circumnavigate the world.  After admiring the Golden Hinde, turn your back to the ship’s main entrance and walk down the alley ahead.

Turn left and walk along Clink Street. You will pass the remains of Winchester Palace on your left – the 13th century home to the Bishops of Winchester and an important building in London until its destruction by fire in 1814. Walk on and under Cannon Street Bridge, where you will find the Clink Prison museum. Built on the site of the original clink prison, dating back to 1144, the museum commemorates London ‘s and one of England’s oldest prisons and the origin of the phrase ‘in the clink’ (referring to someone in jail). 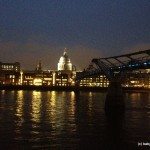 At the end of Clink Street, turn right and you will rejoin the Thames waterfront, passing The Anchor pub – the ‘little alehouse on Bankside’ from which Samuel Pepys chronicled the Great Fire of London in 1666. Continue the walk along the riverside, passing under Southwark Bridge. From here you will get some lovely views of St. Paul’s Cathedral on the skyline on the opposite side of the river.

With fantastic views down the river , the Tower Bridge-Westminster walk takes you past Shakespeare’s Globe Theatre. Walk a little further and you will find Millennium Bridge  – the so-called ‘wobbly bridge’ after its dubious opening when swaying was felt and its subsequent two year closure to rectify this. The pedestrian suspended footbridge leads over to St. Paul’s on the north side of the river and aligned to frame its magnificent dome with the bridge structure.

Continue along the edge of the Thames and follow the path taking you under Blackfriars Bridge. Children will enjoy listening for the noisy rumble of trains overhead at the busy station. Continue along the South Bank and under Waterloo Bridge, walking past the Southbank Centre and the Royal Festival Hall. Passing under yet another bridge you will emerge to the spectacular sight of the London Eye towering over the trees immediately ahead of you and London ‘s iconic landscape of Big Ben, the Houses of Parliament and Westminster Bridge beyond. 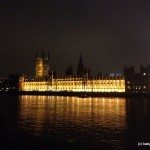 There is no step-free access from the riverside directly onto Westminster Bridge. If you are walking with a pushchair and not interested in seeing the riverside façade of the London Aquarium then turn left just before the London Eye into Jubilee Gardens. There is a playground here consisting largely of climbing walkways which older children will enjoy and flat access for a pushchair onto the street beyond.

Keep to the right on the paths through the gardens and upon reaching Belvedere Road turn right. Walk down the road until it shortly reaches the intersection with the main road. Turn right here and walk over Westminster Bridge, enjoying that famous view of Big Ben and the Houses of Parliament. If time allows, why not finish your walk by following the road round to the left past Big Ben and into Parliament Square. Here you will be able to see Westminster Abbey – the iconic landmark that has been witness to so many historic moments.

If you are ending your walk here, you can pick up the tube from Westminster. The Circle line and Jubilee lines are both accessible for pushchair users. District line is accessible via ramps – please ask for assistance at the station entrance.

For those keen to walk more, why not return to Tower Bridge via the north bank of the Thames or continue with another suggested route? (Details of onwards walks will be updated here shortly).

The Tower Bridge to Westminster sightseeing walk starts from Queens Walk on the west side of Tower Bridge. There is step-free access for those doing the pushchair walk from London Bridge Station close by: exit via Tooley Street and turn right. Cross the road after London Dungeon and continue to walk until you pass Battle Bridge Lane. Here there is a pedestrianised area to your left with shops and cafes, turn down it to City Hall, the riverside and Queen’s Walk – the start of this walk. Please note, there is no step-free access at Tower Hill Underground Station.

View Untitled in a larger map

Permanent link to this article: https://babyroutes.co.uk/walking-routes/london-walks/london-classics-tower-bridge-westminster-southbank-walk/