Suitable for: pushchairs, babies in backpacks, all the family.

The Thames Barrier to Millenium Dome walk is an easy meander along the side of the urban Thames river past a fascinating and less known stretch of London towards the impressive Millennium Dome. The walk begins at the official starting/end point  (depending which way you are walking!) for one of the most accessible National Trails – the Thames Path, which itself stretches 294km west along the river Thames to its source in the Cotswolds. There are plenty of food outlets and good public toilets and baby changing at the Millennium Dome.

Whilst this walk description starts at the Thames Barrier, a fun option is to travel from central London to Woolwich pier by the Thames Clipper boat service and add an extra 25 minutes to your walk by following the Thames Path extension route to the Thames Barrier. The path is clearly marked from the pier with a barge symbol, tracks the river and is easy to follow.

Those walking the Thames Path might like to combine this walk with the Millennium Dome to Greenwich walk for a longer but still manageable start to the National Trail.

The east work-horse side of the Thames Barrier.

Begin from the Thames Barrier. Those walking with pushchairs should follow the Thames Path bike route signs which will drop you round to the western side of the barrier. Walkers or those with pushchairs who want to mark the occasion with a photo next to the sign marking the official start of the Thames Path should head up the steps following the Thames Path sign. Pushchair users – be aware if you go this way there are a further two sets of steps to carry a buggy up and down before you rejoin the accessible bike route. You can use the disable lift in the visitor centre to the right to avoid the worst of the steps and gain access to a good viewing area for the Thames Barrier.

Head down the steps on the other side of the grass bank and turn left towards the Thames Barrier. You get a great view of the barrier up close from the riverside here and little plane enthusiasts will have a great time spotting aeroplanes taking off and landing at City Airport on the opposite bank of the river.

Run by the Environment Agency, the Thames Barrier is one of the largest moving flood barriers in the world and is a key defence in protecting London from flooding caused by tidal surges. The barrier works by raising ten steel gates at times of flooding across the breadth of the river which using detailed forecasts up to 36 hours ahead of an event, help to regulate surges in water levels. It’s an impressive piece of engineering and reaching a height equivalent to five stories, is pretty imposing! Visit the Information Centre to learn more – opening hours can be found here. Toilets and a cafe can also be found here. 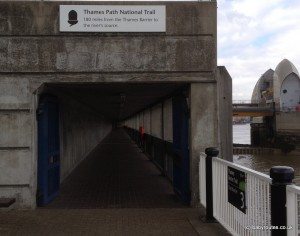 The start (or end) of the Thames Path National Trail.

Head through the tunnel, marked with a sign for the start of the Thames Path National Trail. Through the length of the tunnel the key settlements and height of the river above sea level are marked out along the wall, giving a real sense of just how vast this famous waterway is. Exit the tunnel, turn left up the steps and then follow the footpath signs around to the right. If you are following the bike route instead, the two paths converge here.

The path is clearly signposted along this stretch of the river with the National Trail acorn symbol marking the route along the bank of the Thames. The path ambles past plenty of maritime and industrial points of interest – kids into boats and machines will have plenty to keep them busy and particularly enjoy seeing the dredgers at work.

Dredger at work on the Thames.

The Thames Path passes by the Greenwich Peninsula Ecological Park – set up to preserve an area of marsh and green land after so much of this natural habitat disappeared from the surrounding area as it developed industrially. The park is free to access and has accessible board walks and bird hides to spot the visiting wildlife.

After the ecological park, continue and pass under the cable cars crossing high above the Thames to its north bank. These were built for the London Summer Olympics in 2012. From here the Millennium Dome looms close and good views towards the city.

The walk finishes at the Millennium Dome. Built to mark the Year 2000 , the Dome is one of London’s iconic landmarks. Head through the canopied walkway to your left opposite the North Greenwich boat pier and you will arrive at the front entrance to the Dome.

The structure was designed by architect Robert Rogers and contains symbolic references to its close position to Greenwich and the Greenwich Meridian Line. It is supported by 12 yellow support structures – one for each month of the year or hour of the clockface, and its diameter is 365 metres – reflecting the number of days in a year. Inside, the Millennium Dome is now home to the O2 arena and also  hosts a bustling cluster of restaurants, a cinema, the Museum of Popular Music and many other attractions. It is also possible for those with a head for heights to climb over the roof of the Millennium Dome.

From the Millennium Dome, onward travel connections are easily made with North Greenwich tube stop just next to the Millennium Dome and plenty of buses to take you both east and west (see SE Traveline for you journey options). Those looking for a novel way to cross to the north bank might like to take the cable car and the ferry back into central London or back to Woolwich can be found at the pier next to the end of the walk.

The walk starts at the Thames Barrier. Charlton and Woolwich Dockyard are the nearest stations although are some distance from the barrier. Bus is the best option or for a more novel approach (and adding c.20mins to the walk, take the ferry to Royal Arsenal Woolwich Pier and follow the Thames Path extension signs west along the river to the Thames Barrier.

Permanent link to this article: https://babyroutes.co.uk/walking-routes/london-walks/thames-barrier-milleniumdome/