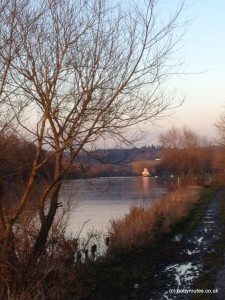 View of Temple Island from the Thames Path, Henley-on-Thames

Suitable for: Pushchairs (in muddy winter weather only possible on first section), all-terrain pushchairs (all year), little legs, baby carriers, all the family. 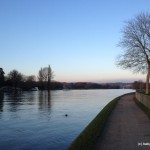 The start of the Henley Regatta walk.

This is a lovely walk for all the family although do not attempt it during regatta week (Henley Regatta is usually the start of July) when it is closed. You can check the Henley Regatta dates here. The first section of the Thames Path from Henley is paved, making it easy strolling for pushchair walkers. The second part is a mixture of narrow path and compact earth – perfectly passable with a sturdy pushchair in dry weather but really only to be tackled by all-terrain pushchairs or with baby in a carrier in wet, winter weather or after flooding. The route is entirely flat with the exception of two small footbridges and given you can turn around at any point, makes a perfect wander for those going at toddler walking pace – just watch out for the river! There are also plenty of ducks and boats to keep little ones entertained along the walk. 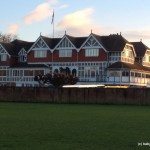 The walk begins in central Henley. Leave the main town behind you and walk over one of the town’s famous landmark’s – the lovely five-arched stone Henley Bridge. Cross to the pavement on the left-hand side of the road (if not already on it) and turn down the small brick-lined alleyway on your left a very short distance after crossing the bridge. This alley will take you down to the side of the river and the start of the Thames Path and the Henley Regatta walk.

On your right you will see the prestigious Leander Club   – finishing point of the Henley Regatta races and one of the oldest rowing clubs in the world, whose members have won more Olympic medals than any other single-sport club in the world.  It’s members have included Olympic greats such as Sir Steve Redgrave (who carried the Olympic torch beneath Henley Bridge in a rowing boat in 2012) and Sir Matthew Pinsent. 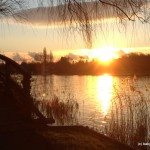 On the opposite bank there is a lovely view of Henley-on-Thames. There are several boathouses that huddle sleepily together against the lapping waters of the Thames and the bridge looks great from here.

Continue along the Thames Path towards Remenham, passing the wide open lawns on your right that once a year play host to the stands, boat racks and VIP entertainment area for the Henley Regatta. Pass over the small footbridge after which the path begins to deteriorate a little. Keep on the Thames Path following the river.  A little further along you will pass by Remenham and Upper Thames Rowing Clubs before coming to the sweet little hamlet of Remenham itself, which borders down to the Thames Path, with the spire of rural St. Nicholas church just visible tucked between the trees.

As you continue, the river opens up with the start of the Chiltern hills tumbling down towards the water in the distance. As you come around a small bend you have a first glimpse of Temple Island and its iconic and ornate folly – a former fishing lodge for nearby Fawley Court. Enjoy the rural Oxfordshire views as you approach Temple Island before turning and retracing your steps, taking in a different aspect of the Thames as you walk back along the Henley Regatta course in the right direction and approach the town once more.

If you prefer a longer walk or an alternative return route, there are several options from Temple Island. Please check back soon for more routes!

The Henley Regatta Walk is easily accessible from the town of Henley-on-Thames. It is possible to catch a train directly to Henley from London or connect with other train services via Twyford. If travelling by car, there is parking close to the river by the River and Rowing museum (as well as great playground there for the kids), or there are three car parks in central Henley – one off either side of Greys Road and the other by Waitrose, off King’s Road. These are all pay and display. For public transport options, Traveline South West is a handy planning tool.

Permanent link to this article: https://babyroutes.co.uk/walking-routes/oxfordshire-chiltern-baby-walks/henley-royal-regatta-walk/