Return to Avon and Somerset Walks 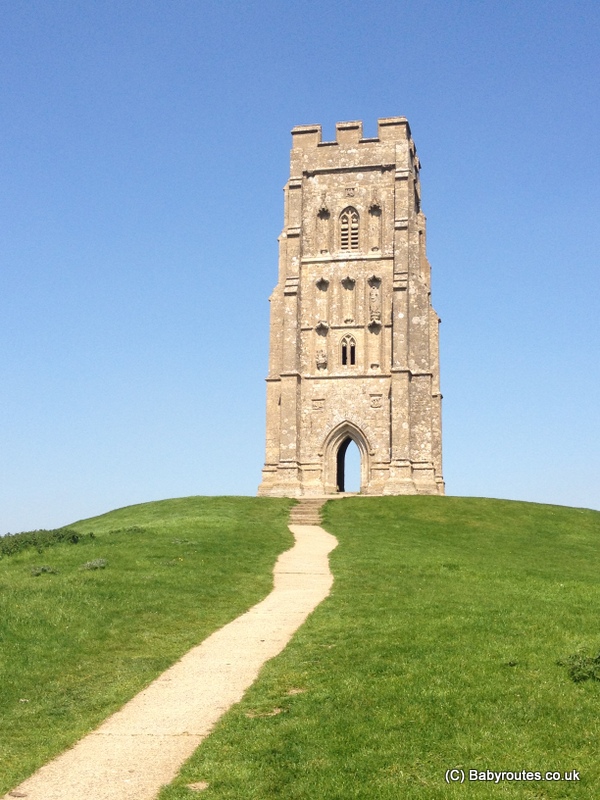 Glastonbury is a place of history and legend and one that children will love. Steeped in mystery and magic, home of the imposing Glastonbury Tor and a place of pilgrimage for Christians and Britian’s more ancient religions of Paganism and the druids, Glastonbury is a fascinating, alluring place where time stands still. Glastonbury Tor itself is prominent on the horizon of the region, a beacon to all who see it towering above the otherwise flat wetlands of the Somerset Levels.

The Glastonbury Tor and Abbey Circular Walk scales the heights to the top of Glastonbury Tor itself before meandering through the tranquil lanes and countryside to the north east of the Tor before returning into Glastonbury ‘s historic centre and offering the chance to detour to visit Glastonbury’s famous Abbey. The final part of the walk does include a small amount of road walking but this is on very quiet back lanes followed by pavement in the town centre.

The walk starts from the family-run Draper Factory at 26 Chilkwell Street (BA6 8DP for sat nav users). There is limited cheap all day private parking for £2 here  – a fraction of the cost of the official tourist parking just down the road and the advantage of being possible to nip in and buy a pair of their lovely sheepskin slippers or gloves. The car park operates on an honesty box basis when the shop is closed, so make sure you bring the exact change to put in the factory letter box and please don’t park in the factory patron only parking area. Space is limited though so arrive early or be prepared to park elsewhere and pay. The route described here passes through central Glastonbury so you can easily join it if parking elsewhere or taking public transport. 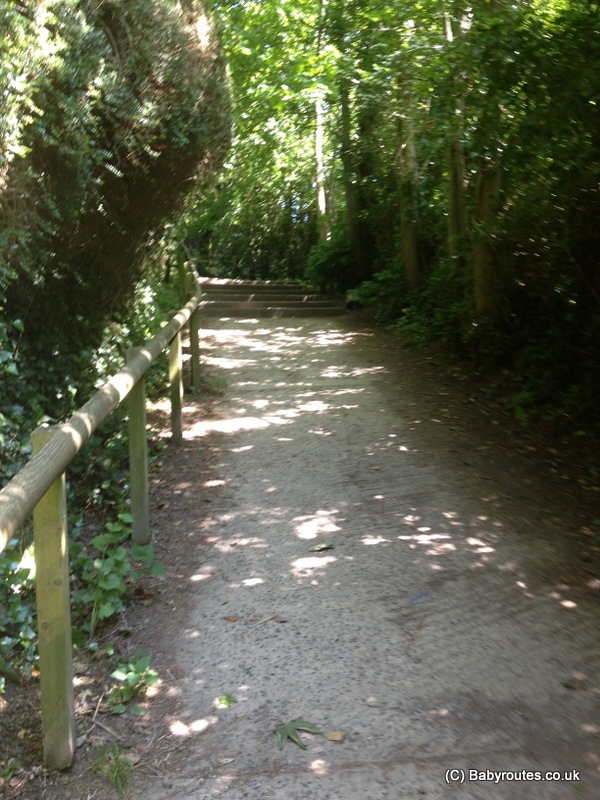 With the car park to your back, cross the road onto the opposite pavement and turn right down Chilkwell Street. You will pass the Chalice Well and Gardens on your left – the site of one of Britain’s most ancient holy wells and a place that people still visit today to find a place of peace and reflection. Turn left onto Wellhouse Lane and cross over, where you will see a small pedestrian lane signposted with a footpath waymarker heading up the hill. Follow this up to the left and you will come to the entrance to the National Trust land surrounding Glastonbury Tor and the path to the Tor itself.

Head through the gate and join the path through the lower meadows – a great place for a picnic – before heading on to the main ascent up the Tor to the remains of St. Michael’s Church on the summit. The path is well-made and makes the climb easier but those carrying babies in carriers should be prepared for a good amount of uphill effort, particularly on warmer days!

Glastonbury Tor is the name of the mound itself, with Tor coming from the Celtic meaning rocky outcrop and is thought to have been home to humans since the Dark Age and likely earlier, with remains of a 5th century fort being found at the Tor. Medieval Saint Michael’s Church was built on top of Glastonbury Tor and remained until 1275 when an earthquake was recorded to have destroyed it. A later church was rebuilt on the site in the 1360s although was not to withstand the turmoil during the dissolution of the monasteries in Tudor times. Richard Whiting, the last Abbot of Glastonbury Abbey was put to death on the Tor at the time of the second church’s final destruction at the hands of Henry VIII. St Michael’s tower is now the only remaining part of the building.

View from the top.

Continue the climb and enjoy the more gentle ascent of the last few yards to St. Michael’s tower and the summit of Glastonbury Tor.  Amazing views over the surrounding countryside in all directions greet you when the weather is good and it is possible to see across three counties from this point. Stop and explore the tower itself, or just take a seat on the hillside in sunny weather and soak in the atmosphere. Remember to hold on to your hats as it can get very breezy on the exposed top and if you’re planning a picnic it may be advisable to wait until you get back down  to the bottom unless you want to risk the wind whipping off with your sandwich!

There is real atmosphere to the Tor and nowhere do you feel it greater than at the top, shadowed by the ruined tower of St. Michael. It is not hard to believe that legend has it the Tor is the fabled Isle of Avalon of Arthurian tales – a story circulating since the supposed discovery of the coffins of Arthur and Guinevere here in 1191. It doesn’t take much imagination to picture Arthur standing looking out across the then flooded plains surrounding Glastonbury Tor and with the mystery this site evokes it is no wonder the Tor is closely linked to Celtic god Gwyn-ap-Nudd – King of the Fairies and First Lord of the Underworld in ancient British mythology. Inspire the kids and listen to an audiotape of local myths and legends to whet their appetite on the car journey here! 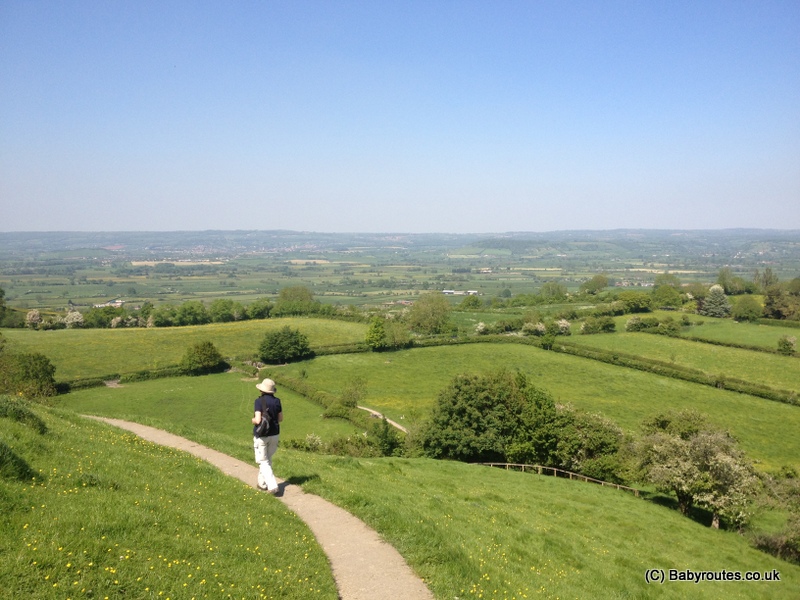 Path down from Glastonbury Tor

When you are ready to move on, descend the Tor using the other path to the south of the Tor. There are only two proper paths to and from the top so you can’t go wrong. The descent is reasonably steep so those with baby carriers take care but the path is good.   Keep on the path until you reach the bottom of the Tor and then follow it round to the right to a small gate leading you out of the main park surround Glastonbury Tor. The path now leads through a lush meadow – a good spot to stop for a picnic with views of the Tor in the background.

At the end of the meadow, pass through the gate and turn right down the lane. Just as the lane bends around to the right there is a smaller lane carrying straight on down the hill. Continue on this lane, leaving the views of Glastonbury Tor behind you for now and enjoy the shady walk downhill.

Near the bottom of the hill you will see a footpath crossing the lane in both directions. Turn left along the footpath, passing the metal gates and down a grassy hedged lane, passing a campsite and caravan park hidden behind the trees on your right. Look out for a footpath sign on the left hand side and when you come to it, climb over a stile in the hedge on the left and continue on the path leading up through a field back towards the Tor. At the top of the first field under the treeline there is a stile (although at time of writing this was in need of some repair and you could walk right past it). Stop and enjoy the views back across the levels before continuing over the stile and through the next field. On the far side of the field the path goes over another stile. Hang on to your wellies here as the ground around the stile can get very muddy after wet weather!

Turn right along the little  track beyond the field and continue along the now fairly flat footpath along the edge of the hill, looking out for the tantalising views back across the levels which drop away from you every so often. At the end of the lane you will come to a crossroads. Cross straight over and continue your walk along the quiet lane back into Glastonbury. There is some traffic along here so do keep an eye on little ones but it is generally pretty quiet. Follow the lane downhill until it take you down to an intersection with the main road that heads back to Glastonbury centre. Turn left and walk on the pavement along the road, which at the end of you will reach a t-junction with the main high street of Glastonbury just opposite and to your left. If you fancy a diversion then explore the unusual array of shops offering everything from crystals to healer treatments and anything else magical and mystical as the environment demands! There are also plenty of places to stop here for refreshments. 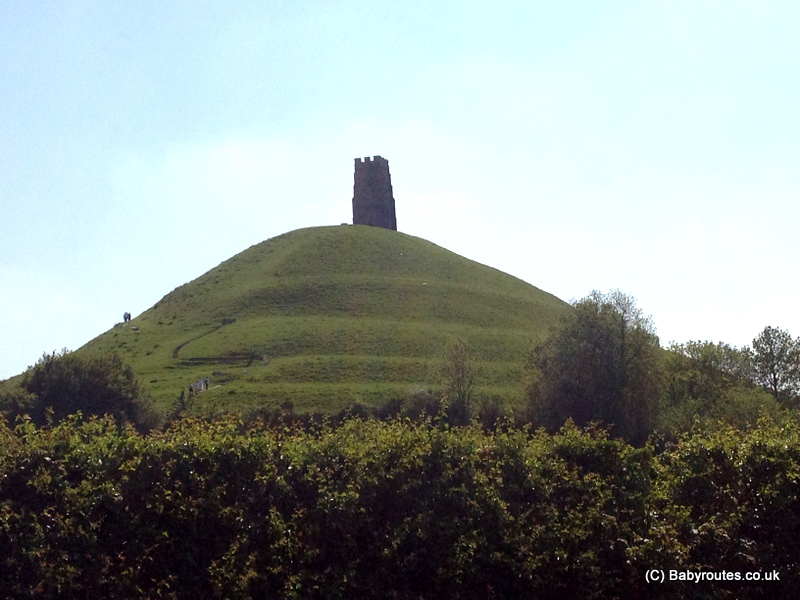 The view back up to the Tor.

From the t-junction the walking route goes left along Lambrook Street and along by the tall walls of Glastonbury Abbey. Glastonbury Abbey is  If you would like to extend your walk with a visit to Glastonbury Abbey then go down High Street just after the T-Junction and at the bottom of the street you will find access through St Dunstan’s car park or from Magdalene Street. Set in a large area of parkland, Glastonbury Abbey is thought to be the first Christian sanctuary in Britain, founded in the 7th century. Legend has it that the Abbey was actually founded by Joseph of Arimathea who is supposed to have first visited the site with the boy Jesus and founded the first church here, before later returning to bring the chalice used by Christ at the last supper  – the same Holy Grail of Arthurian legend. The famous Glastonbury Thorn, a flowering sprig of which has always been sent to the British monarch at Chistmas, is said to have sprung from Joseph’s staff when he struck it in the ground whilst resting for the night. You can find more details about the Abbey and visiting information on the Glastonbury Abbey website. 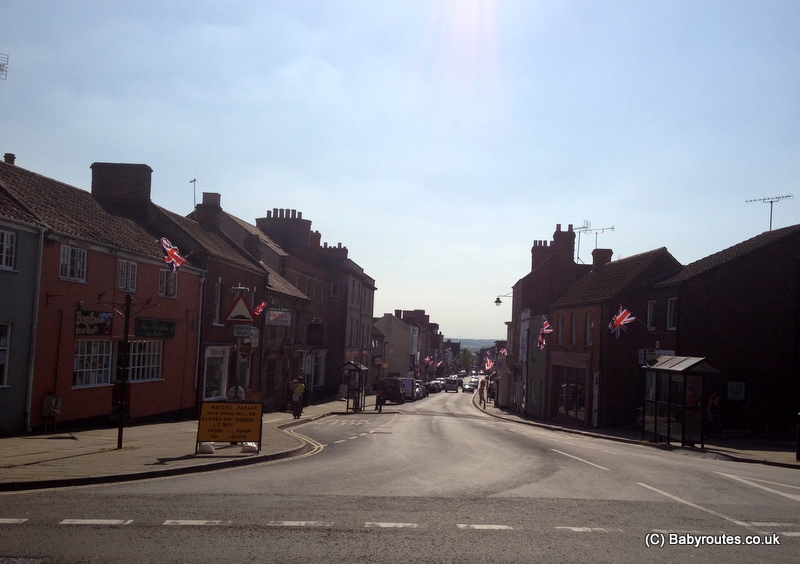 From Lambrook Street walk the length of the road, following Glastonbury Abbey ‘s tall outer walls and then turn left. The car park where you started is just a short distance on the opposite side of the road.

Permanent link to this article: https://babyroutes.co.uk/walking-routes/uk-ireland-walks/avon-somerset-walks/glastonbury-tor-abbey-circular-walk/