Return to Gloucestershire, Forest of Dean and the Cotswolds

Walk Duration: 1hr 15 (with little walkers. Longer if stopping to explore the cave and views!)

We tackled Herefordshire Beacon, the smaller of the two main peaks on the Malvern Hills, with Roo’s slightly older cousins. Shortly after starting the walk we realised a thunderstorm was coming our way. Luckily the storm passed us by so we made it to the top. It did give us some dramatic views though! This walk involves quite a steep climb at the start but is well worth it for the views from Herefordshire Beacon and all along the route. Kids will enjoy exploring Clutter Cave and the iron age hill fort whose earthen circular fortifications are still clearly defined. I definitely recommend the ice cream from the cafe opposite the car park at the end – it’s some of the best I’ve had for a while!

The walk starts from British Camp Car Park, with the path leaving from the side of the car park through a small gate.

Head up the rough path through the trees as it winds gently uphill. After a short while the path splits with a fork off to the right leading uphill. Take this path and walk up the steps as the first views begin to come into sight above the hedgeline.. Follow round to the left and continue on the path as it climbs up toward Herefordshire Beacon. There are quite a few steps here and a reasonable climb but also some fantastic views so you can enjoy taking the climb at as slow a pace as you need. 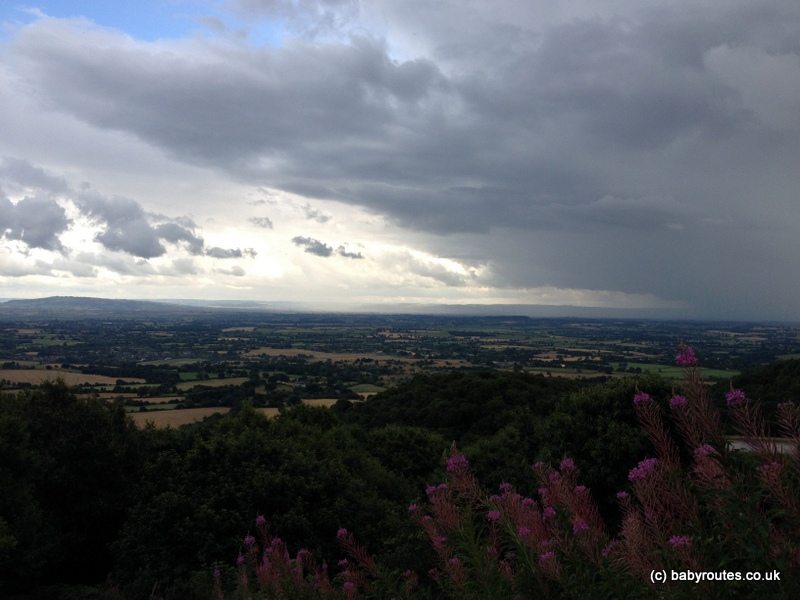 From Herefordshire Beacon at the top the views open out in all directions, including along the backbone of the Malvern Hills. The remains of an ancient Iron Age hill fort is still clearly visible here, with the giant banks circling the beacon asking to be explored by adventurous young walkers!

Continue over the brow of the hill, following the path as you walk down the opposite side of Herefordshire Beacon. The path follows the spine of the hill along the remains of the Iron Age hill fort, before zigzagging down a steeper, slightly stepped section from the next hill-top. 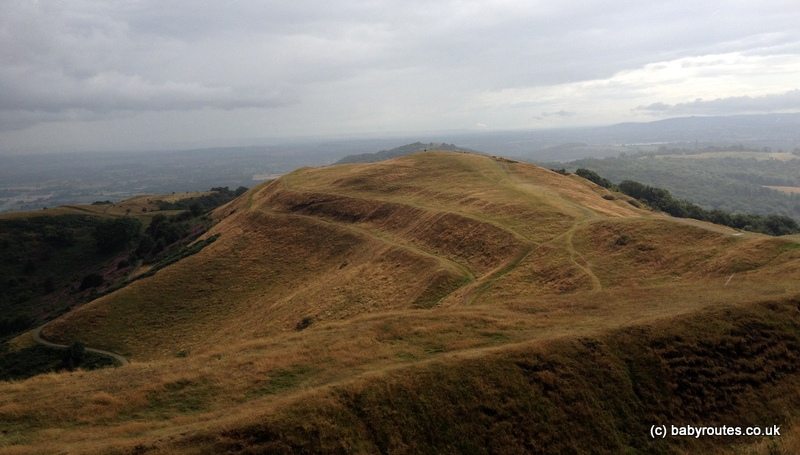 At the bottom of this section of the walk you come to a grassy cross-roads of paths. If you are interested in visiting Clutters Cave take the right hand fork. If not, take the left.

For those visiting Clutters Cave, continue on the right hand path for a short distance. The views change here and become much gentler and wooded. Away in the distance you can see the obelisk of Eastnor Castle as well as a glimpse of the castle itself, nestled amongst the trees that normally shield it from view. The obelisk was commissioned at the same time as the neighbouring castle by the 1st Earl Somers in 1812 as a monument to the members of that family.Incidentally, you can visit Eastnor Castle and its lovely grounds from Easter to the last Sunday in September. 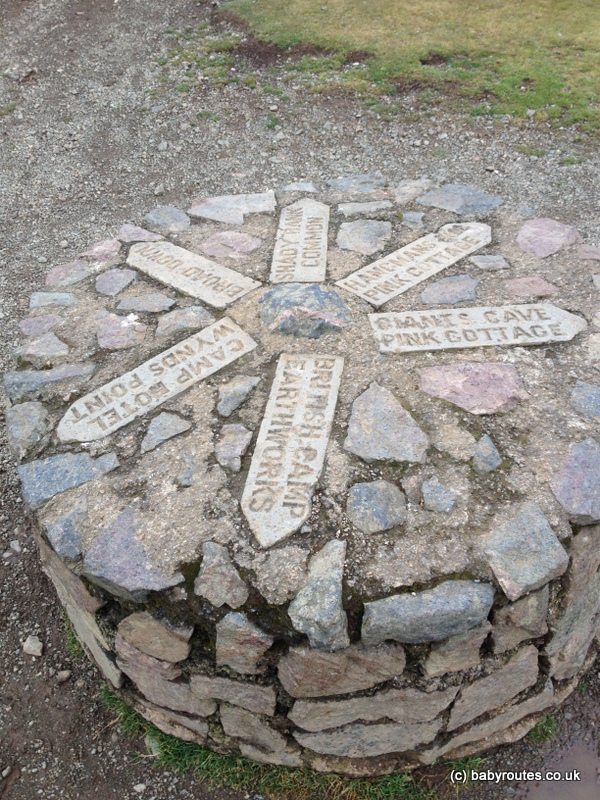 Clutters Cave is located on the left hand side of the path a short stroll from the crossroad of paths. It’s an man-made hollow in the rocks whose origins are unknown. There are some great stories circulating about it though, amongst the most interesting for kids being that it was the home of a stone throwing giant and that it was a place of sacrifice! Whatever its history, its a fun place for kids to scramble around. Roo was convinced that both the Gruffalo and the bear from Going on a Bear Hunt were hiding within!

From here, this walk takes you back the way you came to the grassy crossroads. If you have time and inclination for a longer walk though you can carry on the same path beyond the cave and follow it as it bends around to the left. If you keep to the left, it will eventually bring you back to the crossroads again via Hangman Hill, adding on 0.8km to the walk. 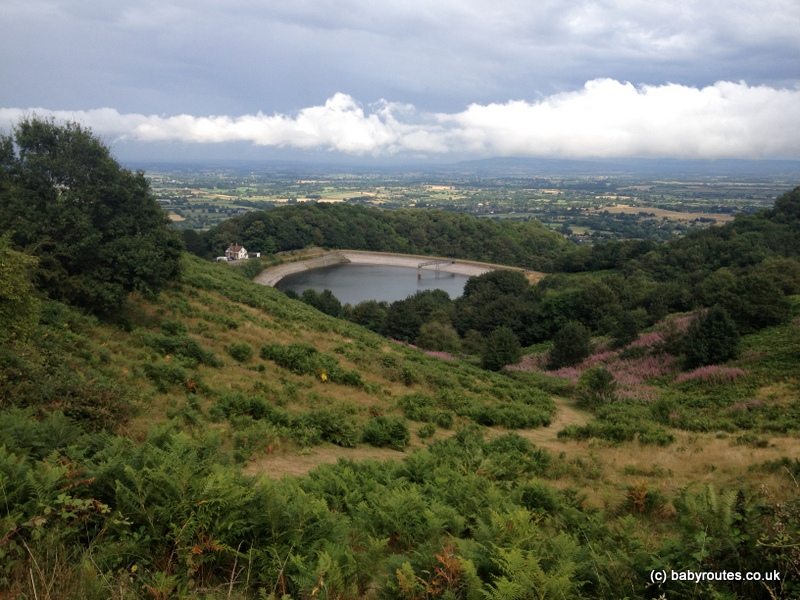 Back at the crossroads, take the northern-most path. If returning from Clutters Cave via the same route then this is the path opposite, returning via Hangman Hill this is the right hand turn, or if coming straight from Herefordshire Beacon, turn left! Here the path weaves along the side of the hill back beneath Herefordshire Beacon. To the right there are lovely views of British Camp Reservoir as well as a welcome bench or two in the shelter of the hill for picnickers/view admirers. Keep up on this path, ignoring others to the right. The walk takes you back into a slightly wooded section and you will pass your original turning off point up to Herefordshire Beacon on the left hand side of the path. Carry on down the hill and back through the gate to British Camp car park, from where you started the walk. If the weather is warm then do head across the road to the little stall/cafe opposite – the ice-creams are fantastic and offer a pretty exciting range of flavours! 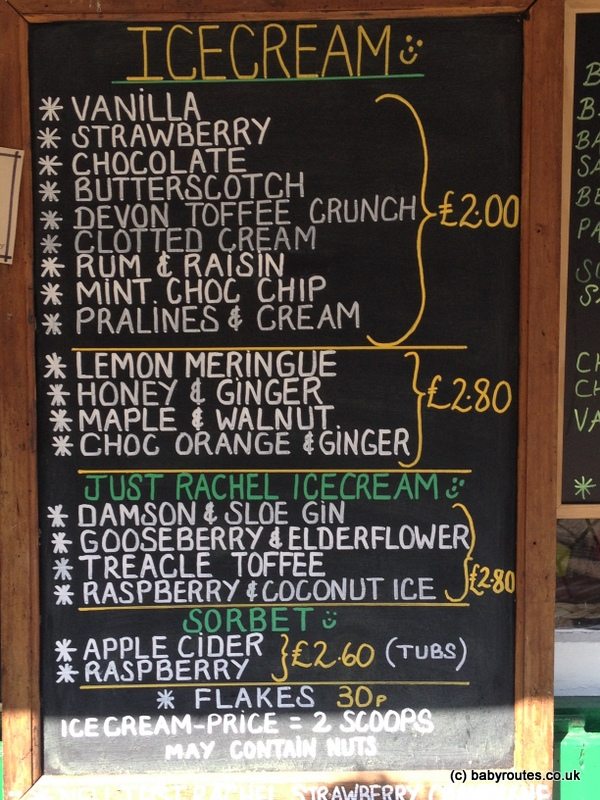 Parking is available in the Pay & Display British Camp car park just off the A449 and opposite the Malvern Hills Hotel. Parking was £3 for a day at time of writing.

Permanent link to this article: https://babyroutes.co.uk/walking-routes/uk-ireland-walks/gloucestershire-cotswolds-forest-of-dean/herefordshire-beacon-clutters-cave-malvern-hills-walk/