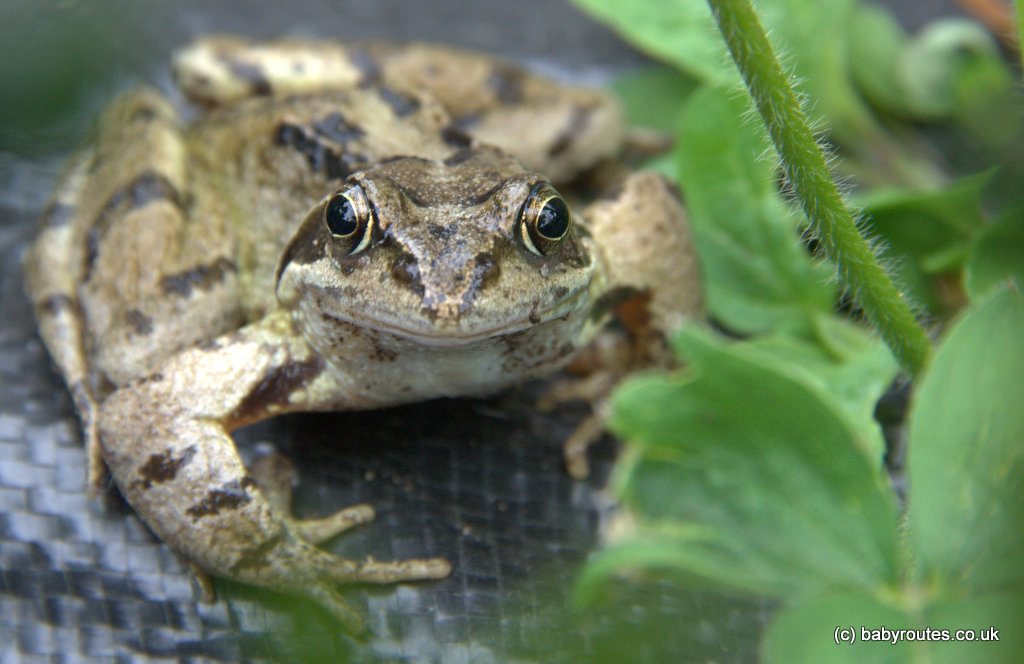 Do you want to know the magic solution to a slug infestation? Get some frogs!

Joking aside, frogs are seriously helpful little creatures to have in the garden, as are their amphibious relatives – toads and newts. All of them enjoy a diet of small insects, insect larvae and slugs, making them a gardener’s best friend as the growing season kicks off once again. So long as you leave the slug-pellets in the garden centre, these funny little creatures will happily roam around your flower beds hoovering up any unwanted slimy menaces. All you need to do is to attract them to your garden first!

We have found some frogs munching up the slugs beneath our rhubarb and strawberry patches for the last few summers, much to Roo’s relief (she’s very protective of the strawberries).  I’ve also nearly tripped over a toad once on our front drive and found a newt cooling off in the tomato pots’ water in the greenhouse. We definitely have amphibians about but up until now, other than growing a few plants, leaving some old logs about and letting the grass grow a bit long in places we’ve not been doing a lot to help them out. 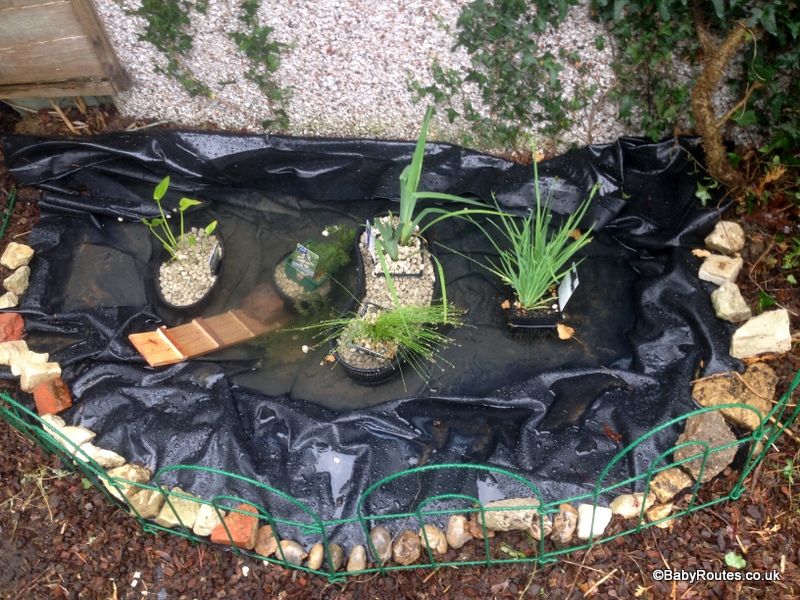 Our pond just after it had its first fill up. I know, I know, I have far too many plants in there…

Everyone, everywhere, with an interest in nature will tell you that the most important thing you can do in your garden to help wildlife is to make a pond. Not only does a pond provide a breeding place and watery retreat for our friends the frogs, toads and newts but it also provides a source of water for garden birds and animals.

By pond, this doesn’t have to mean a mini-lake, beautifully landscaped and full of Monet-esque lilies (we can dream though). It can be as simple as a washing up tub sunk into the ground, filled with water plus a large rock for froggy access. Add a tiny bit of native pond vegetation for added amphibian appeal! Whatever kind of watery access you have room for in your garden will be gratefully welcomed by wildlife.

Despite knowing this, with a toddler and overly curious 4 year-old regularly rampaging round our garden, I admit that I put off making a pond. It would surely only be a matter of hours before one of them toppled in after the frog they were inspecting! We also have a large oak tree in the garden that tends to violently fling down its leaves in umbrage at winter. Any pond near that would turn into a leafy swamp within a week of autumn starting! 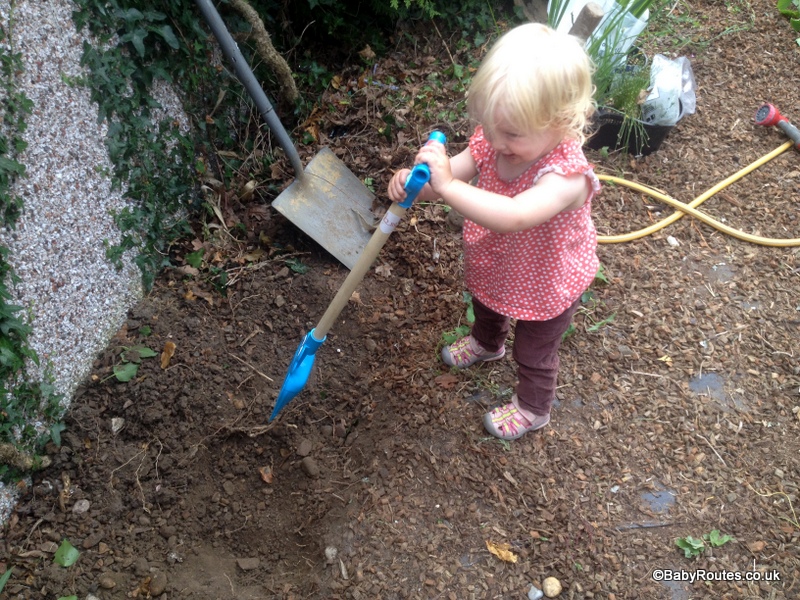 Beth was particularly keen to get started on the pond project…

Still, my conscience nagged at me and at last early last summer I identified a spot to make a small pond in the veggie plot, as far from the oak tree and as close to our slug issues and current frog residents as possible. Purchase of pond supplies and manual work took all of a few hours and given its size, fairly inexpensive. With the help of our enthusiastic mini-gardeners our pond was full and ready to go later that same afternoon. 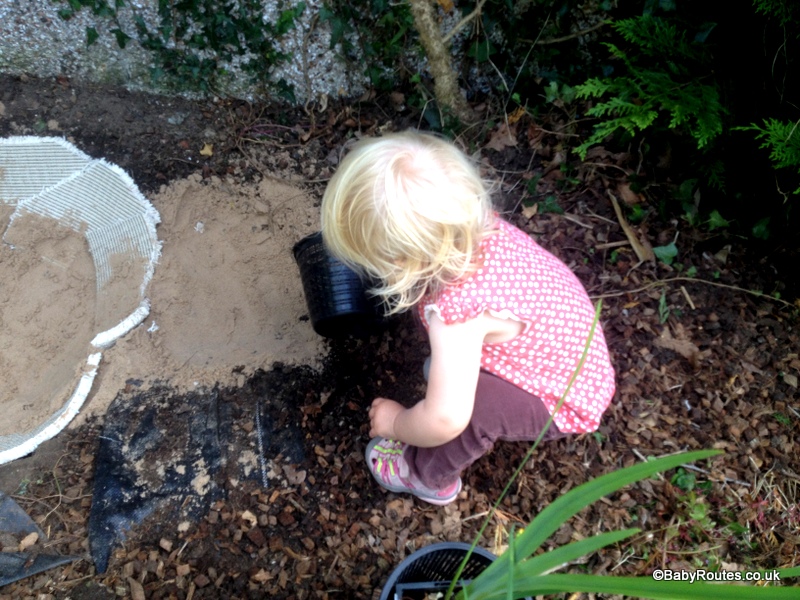 The pond construction was fairly basic. It consisted of: 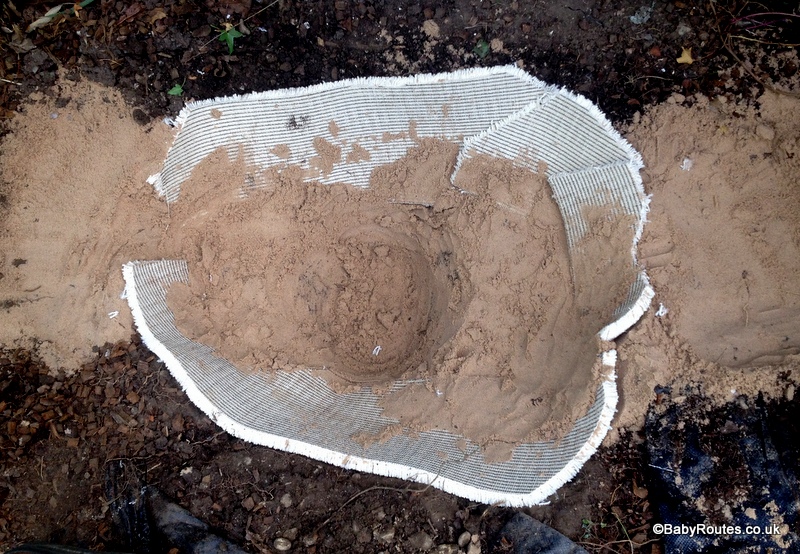 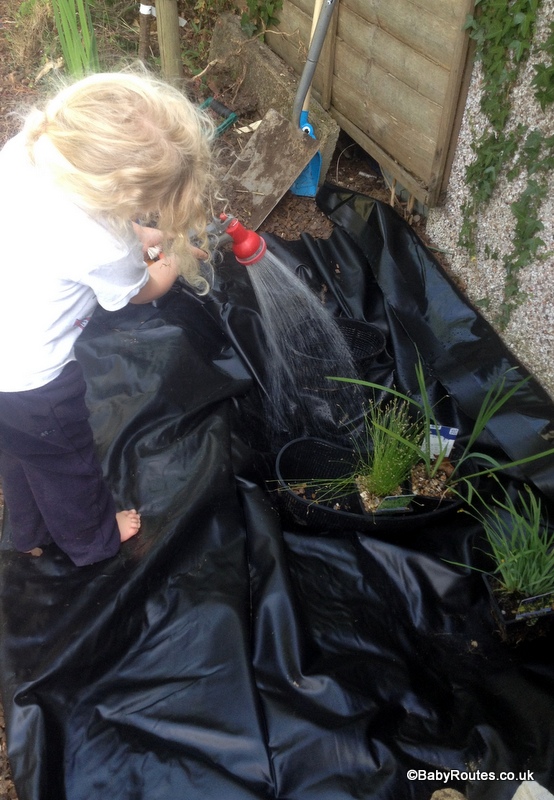 Roo watering both herself and pond!

Over the coming weeks our pond went from crystal clear delight to murkier depths. My husband moulded a crude dome out of chicken and garden wire to pop over the deeper middle section and we put up some low metal edging around the pond perimeter to deter our two little curious monkeys from getting too close. Not that I think either of them would fit in our tiny pond without displacing most of the water anyway…

Our regularly visiting hover-fly – we think it is a sun fly which would be appropriate given its propensity to laze about in sunny spots!

Weeks passed and not much seemed to be happening in the pond other than that the water seemed to slowly be clearing again and the same hover-fly was spotted visiting the pond daily, perching on the pond plants. Then seemingly overnight we suddenly noticed several things at once – tiny water-snails had appeared in the pond, probably from eggs on the pondweed that we had added; we identified (after much searching) several very weird looking hover-fly larvae and a frog took up residence. 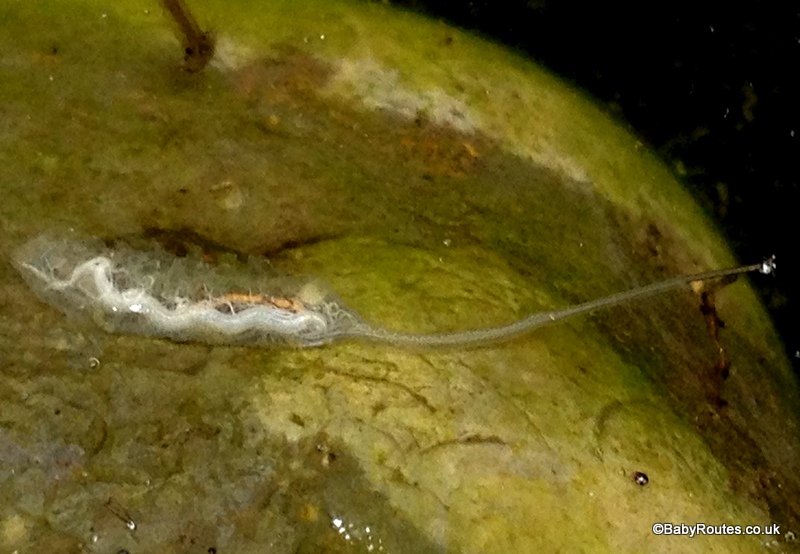 The very odd larva of what we think is a sun fly – a type of hoverfly that breeds via water.

Fine. When I say a frog took up residence I admit that perhaps ‘was relocated’ might be more honest. We had a found it hiding under some logs that were being moved during a garden DIY project and so moved to the pond-side along with a log or two. We didn’t expect it to stay but stay it did, hanging out in the shallows of the pond all summer! It was at this point that one-year old Beth added ‘Fwoggy’ to her ever-expanding nature vocabulary.

Roo and Beth enjoyed inspecting the pond daily. We spotted the occasional fly-by from a damselfly and various other wriggly larvae, so far unidentified, were also spotted. A few weeks ago things got even more exciting. Whilst Roo was fishing out excess fallen leaves from the pond (wretched oak tree!), she spotted a newt (we think common) crawling about in the pond-weed. We spotted it again a week later along with not one but three large frogs by the pond-side! It’s barely six months since we built the pond and already it’s teeming with wildlife!

Now I’m rigging up the wildlife camera near the pond to see what else is going on out in our pond as spring kicks into action. We have added some broken old pots and some more wood and stones round the edge of pond for wildlife shelter and I have plans to plant up the area around the pond a bit more to provide a safer hopping route for the frogs to those all important strawberries… I’ll also be relocating the old bamboo edging there that was previously heading for the bin until I found a little frog and a newt overwintering in it earlier this winter! 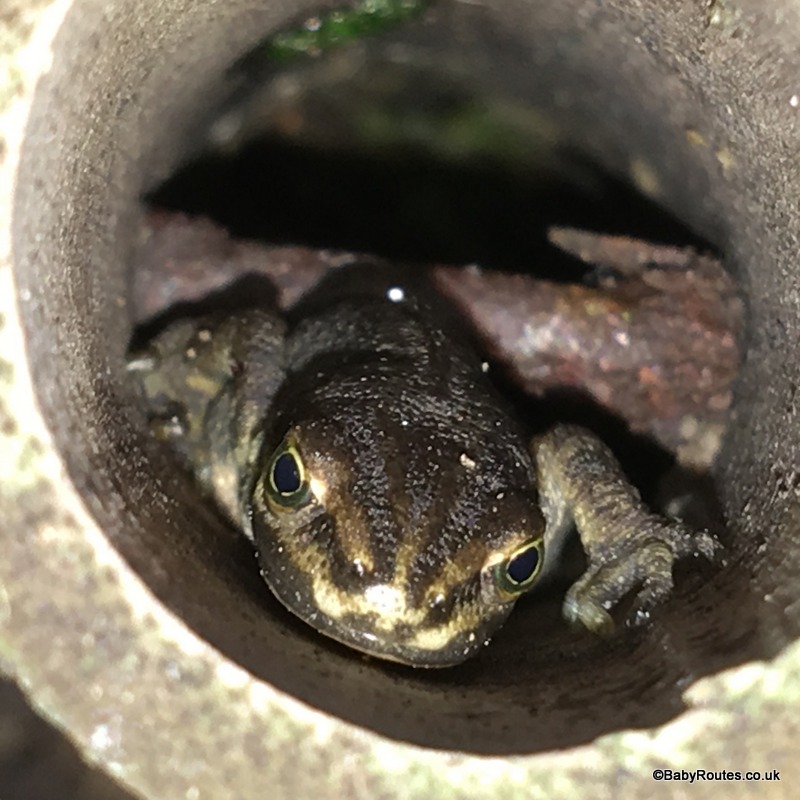 There has been some work to do: over winter I’ve been melting a small hole in the ice to prevent toxins building up (a small ball left in overnight and then removed is another trick people suggest. Cracking the ice causes shock-waves that are harmful to  overwintering pond life). We do seem to have a bit of duckweed and blanket weed in the pond (not too much to be a concern yet). Roo helps me to fish this out from time to time so that it doesn’t get a chance to build up too much. Despite our best efforts the oak tree has managed to get some of its leaves into the pond and these too we fish out if there seem to be too many. Apparently fresh oak leaves in particular can make the water overly acidic. Finally, I’m keeping a close eye on the Canadian pondweed in there. Despite being beloved by the newt it grows quickly and can cause light and warmth to be blocked out of the pond if it takes over too much – both of which pose problems for the wildlife-friendly factor. Come the summer I expect I will be removing some of it at intervals. In hindsight it should never have gone in in the first place…

Another visiting pond pollinator and a welcome splash of colour from one of the pond plants.

Overall though the work has been minimal and the rewards great, both visually and for nature. All those people who said having a pond would be a great wildlife addition to the garden were spot on. Already it is alive with all sorts of little creatures, I’m learning something new  and identifying something new every day and every water discovery is further fuelling my two girls’ ever blossoming fascination with nature. I can’t wait to see how our little pond develops as the weather warms up.

Our wildlife pond, successful as it seems so far, was a bit of an amateur attempt. When I have spent a bit longer learning about the ‘proper’ way to make and maintain a wildlife pond I’ll be posting more. Until then, please check out the below links for inspiration for your own wildlife pond projects:

Permanent link to this article: https://babyroutes.co.uk/wildlife-wednesday-building-a-pond/ 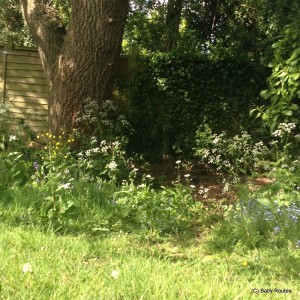 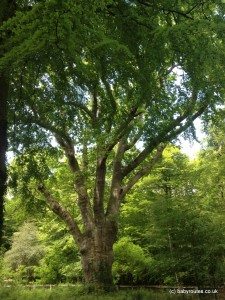