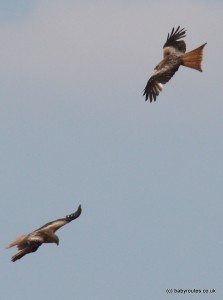 Wildlife enthusiasts and all those who love our Great British Outdoors – take note.

Last week saw the launch of the ‘State of Nature’ report and the emergence of an exciting but worrying partnership: exciting because for the first time 25 of the UK’s key wildlife organisations have teamed up to share their expertise and knowledge to investigate the state of UK nature; concerning because such a show of unity was deemed necessary in the face of the massive challenges looming ahead of British wildlife conservation.

The report results provided little comfort either. Launched by Sir David Attenborough, the ‘State of Nature’ report revealed that 60% of the 3148 species assessed have declined in the last 50 years, with 31% showing a strong decline. Conservation priority species saw a 77% decline over the last 40 years, with little sign of any recovery. 1 in 10 of the 6000 species on the Red List ( a list of the most endangered species) are also thought to be in threat of extinction.

Worryingly, the report only covers a very small fraction of species in the UK with quantitative data only existing for 5% of the UK’s 59,000 or so land and freshwater species. Much of the data available is gathered by thousands of wildlife enthusiasts and volunteers. It is the ongoing efforts of these volunteers that are critical to the future monitoring  and conservation of the natural world on our doorstep.

At primary school, I clearly recall an exercise we were once set. All the children were given a piece of paper and crayons and asked to draw a picture of a scientist. Predictably, the vast majority drew a picture of a mad-eyed man with crazy hair and a white coat clutching some test tubes. A few featured Frankenstein. It was with some amazement and a good degree of incredulity that we listened to the teacher’s suggestion that scientists could be female,  ‘normal’ looking and not always indoors, wearing a white coat. Lessons learnt? Scientist can be pretty cool and stereotypes are misleading.

I wonder what the results would be if we asked children today to carry out a similar exercise with other stereotypes such as the bird watcher and the naturalist? I have a suspicion that the results would not be entirely flattering and more importantly, I wonder how many children would draw pictures of themselves or of mummy or daddy?

Stereotypes revolve around associating a certain activity, philosophy or similar to physical human features and character traits. Whether there is any truth in them or not, they create divides  – a ‘them’ and ‘us’ mentality which makes integration of the ideas and activities belonging to that stereotype less accessible to the wider community and like so many things, these generalisations are learned by children through society and their families. Where people have no direct contact with an activity or philosophy, it is hard to appreciate the values attached to them and they default to a stereotype which can be easily dismissed as personally unimportant.

80% of of the UK population live in urban areas. That’s a lot of families growing up with limited exposure to nature in their neighbourhoods and with the loss of playing fields and increasing amounts of time being spent by children indoors, it is going to be very hard for our children to foster an appreciation or love of the natural world on their own without the help of their family and mentors. What’s more, whilst many children are aware that tigers are endangered from school projects or wildlife documentaries, how many are aware that red squirrels are similarly threatened or indeed that squirrels come in a colour other than grey?! 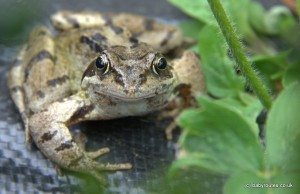 Nature is everywhere! This frog was hunting in our strawberry patch in the back garden.

The State of Nature report showing that climate change, habitat loss and environmental issues are the likely cause of much of the decline in British species and the tireless work of volunteers is critical for recording the large volumes of data needed to track wildlife trends. It is therefore vital that we blow away any stereotypes and get the next generation educated, involved and enthused in wildlife conservation directly. It is down to us as parents and grandparents to lead by example and get our kids outside as much as possible and expose them to the wonder of natural Britain –  whether grubbing about looking for beetles, hiking in our stunning countryside, learning to identify birds visiting the window feeder, watching tadpoles develop into frogs or helping build a butterfly garden.

We have a massive advantage in encouraging our children to become wildlife enthusiasts too – kids love being involved and this is one area where children’s hands-on efforts count just as much as adults. What’s more, it is fun. Building a bird box, putting up an insect shelter, taking great photos of garden birds or being informed enough to tell their mates not to stamp on that spider on the classroom floor and instead be that brave kid who picks it up and take it out of the way of trampling feet all important. They may not necessarily become the next Sir David but they will have an enriched childhood and hopefully grow up to be well-rounded individuals who understand the arguments and motivations of conservationists and appreciate their Great British natural inheritance.

Got a question? Head over to Twitter and join in the #naturesintrouble Tweet-a-thon running all day 29th May 2013. You can find a schedule of who is answering questions here.

For ideas on how to get your children involved in nature, the RSPB has a great kids section on their website. It’s also worth getting involved with your local wildlife trust and nature reserves (there are plenty in big cities too) or woodland trust area as they often have family events on, quite often free. Want to help out with future wildlife surveys? You can find a list here, several of which are suitable for family of all ages.

Permanent link to this article: https://babyroutes.co.uk/wildlife-wednesday-natures-trouble/ 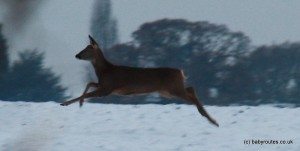