Searching for Seals: One Great Reason to Visit Pembrokeshire in Autumn 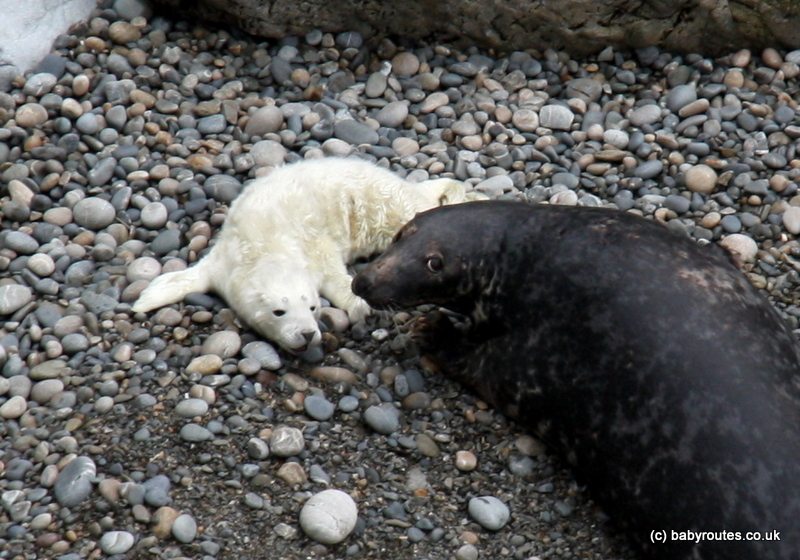 Fantastic opportunities to watch some of Britain’s most exciting wildlife is one of Pembrokeshire’s big draws. Having been enchanted by the Puffins of Skomer Island during our trip back to Pembrokshire in June, we were eager to see more of the local inhabitants during our autumnal return visit.

Fortunately for us ( and particularly Roo who was disappointed and confused that the Puffins wouldn’t be there this time), early autumn is a great time to spot seals in Pembrokeshire. Ramsey Island in particular is home to a huge colony of Atlantic grey seals, with up to 1000 around the small island’s shores at peak season. At any time of year it is possible to for the sharp-eyed to spot these gentle-faced marine mammals wallowing in the water below the cliffs of the Pembrokeshire Coastal Path. At breeding season and moulting time, the chances of seeing many seals and even seal pups on the regions’ rocky beaches is greatly increased. 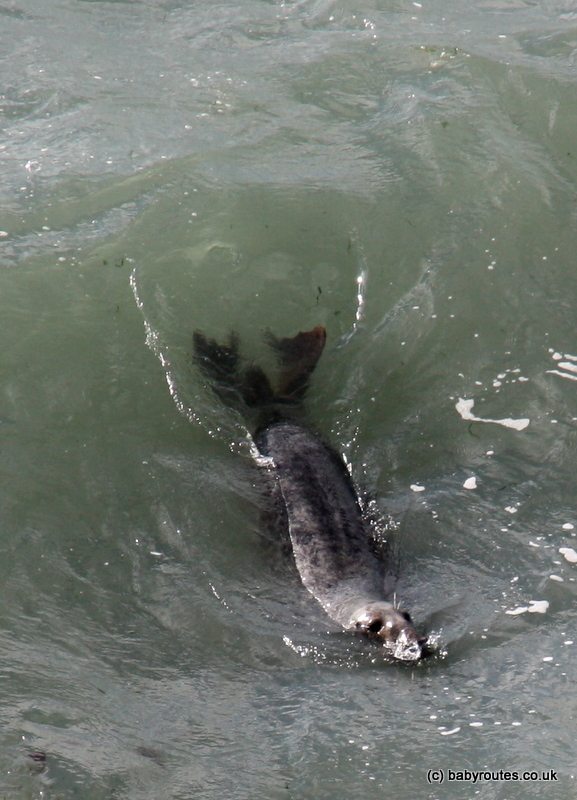 Surfing seal – actually one we spotted from the cliff path by Whitesands Beach the day before.

Between the end of August and December in Pembrokeshire, seals return to the beaches to give birth to their pups, with September and early October being the busiest time for new arrivals. From December through to the beginning of March, adult seals come ashore onto Pembrokeshire ‘s rocky and undisturbed beaches in huge numbers to moult.

Visiting at the start of October, our hopes were therefore high for some baby seal pup sightings! Having done some research, a boat trip around Ramsey Island seemed the best option for spotting seals. At one hour long it would keep the girls exposed to the elements for the shortest possible time whilst allowing up-close, sea-level sightings of the seals. I checked that babies were allowed on the boats – they are (as are pregnant ladies in case you are wondering) although you have the option of taking a more traditional boat instead of a RIB with very young children if you want a less exhilarating voyage and more wriggle room. 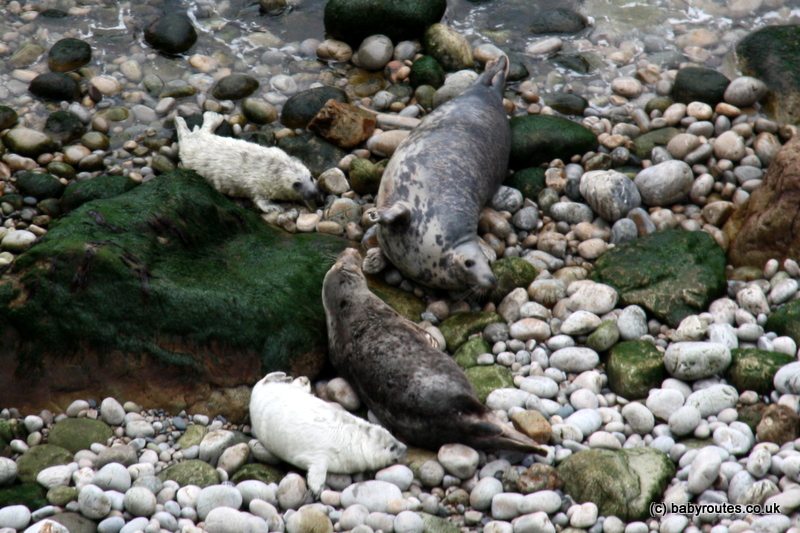 Having a lazy family Sunday!

Unfortunately the weather was not on our side. The blue, sunny skies sadly did not reflect conditions out at sea, where gale force winds were whipping up waves into some fantastic rollers. At first the boat companies said they probably wouldn’t take a baby and then they cancelled all trips completely. With winds that strong, I’m not sure it would have been much fun even if they had been running!

Undeterred, we checked out on-foot mainland alternatives. Our first plan was to join a guided seals and seal pup walk led by a ranger from the National Trust, as recommended by the helpful folk over at Visit Pembrokeshire. With more windy conditions though, we decided to go under our own steam instead so we could ditch out if it proved too much for the kids. 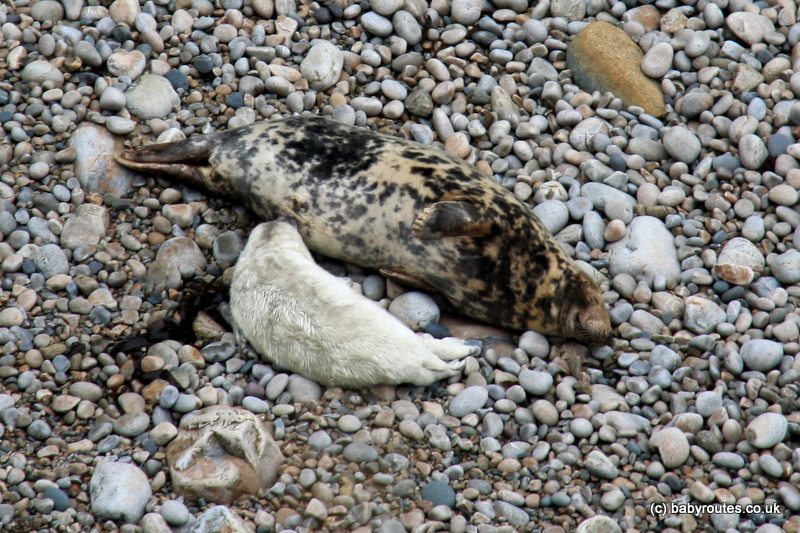 Our quest to find seals took us onto the cliff-top footpaths of the Deer Park at Martins Haven. Unrelated to deer as far as I can tell, this is the area of headland by Martins Haven harbour and a reputedly good spot for seal sightings. We headed off during low tide when seals are most likely to be found ‘hauled out’ on the rocky beaches – an accurate description for the rotund seals who look so out of their natural element dragging themselves along on land without their usual aquatic grace.

The south cliffs were seal free and extremely windy (we were glad we had Roo’s rucksack reigns on) but we struck lucky as we rounded to the northern side. There, far below, were not just one or two but lots of seals and their pups. Judging by their varying sizes and colours, they were all different ages, with some raw evidence of left behind on the rocks of a birth that morning.

Seal pups change their colour as they get older, first losing their yellow tinge and getting whiter before gaining their grey adult coats after they are weaned at about 3 weeks. The white fluffy coats of the seal pups are not waterproof and the baby seals ‘ body fat is not sufficient to keep them warm in the water so their time in the sea is very limited at the start of their lives. This does mean they are easy to spot for passers-by on the Pembrokeshire Coastal Path though!

Roo was completely taken with her Pembrokeshire seals. The wind meant the seal pup calls were intermittently wafted up to us many meters above. Nursing mother seals lolled lazily with their young beneath us; weaned pups with their salt-and-pepper coats, watched on from their solitary positions on the beach and the water rippled with feeding adult seals returning to shore. We felt privileged to witness one intimate moment when a mother seal dragged herself long, slow meters back from the sea to her pup and greeted it with a tenderness that it seems every mother knows, regardless of species. It was enchanting and with three beaches of seals to watch, we were spoilt. The walk was pretty good for other times of year too with some great views of Skomer Island – I’ll upload our route soon. 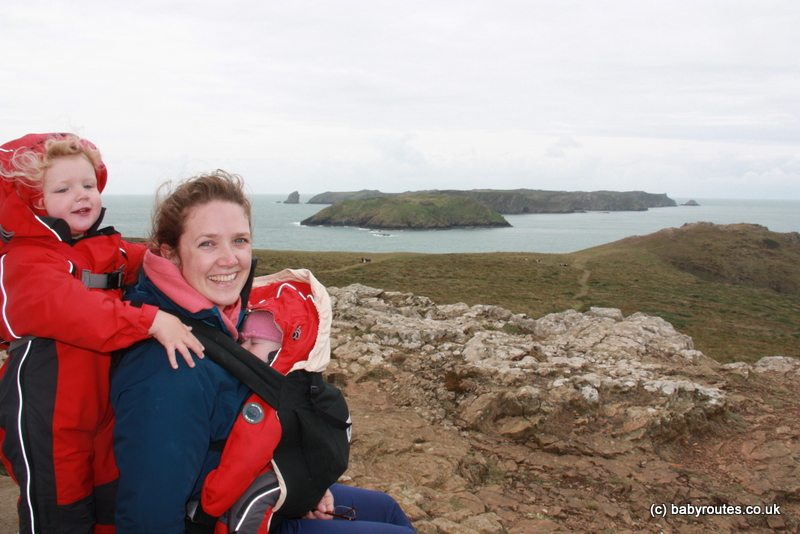 Dressed for the elements on our seal spotting walk. Skomer Island in the background.

The only thing I would warn other families about who would like to visit  seals in Pembrokeshire with children of any age are the cliffs. They are sheer-sided and it’s easy to get carried away with the engaging animals you are observing at the cliff-bottom. With very little children I would definitely recommend reigns of some sort as an extra precaution and to take care when using cameras or binoculars (bring some!) for a better look. Having said that, we managed with Roo (2) walking and baby in a front carrier, even in very windy conditions but if we’d had the choice, I’d still probably have opted for spotting seals from a boat with littlies. We were going to use Voyages of Discovery or Thousand Island Expeditions, both of whom run several different trips to see seals and have offices in St. Davids in northern Pembrokshire.

Watching the seals was a really magical experience for all of us and Roo couldn’t wait to take a photo of the baby seals in to show nursery when she got back. We will definitely be back to find the seals again as the girls get older and recommend seeing the seals and their pups as one of the best wildlife experiences in the UK for children and adults alike.

Joining in with the Country Kids Linky:

Permanent link to this article: https://babyroutes.co.uk/wildlife-wednesday-searching-seals-martins-haven/ 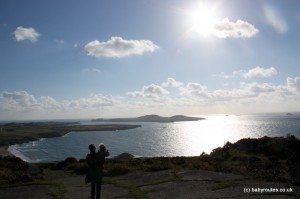 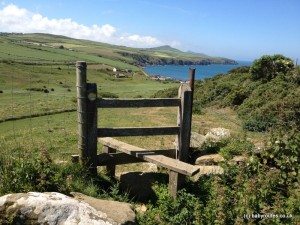